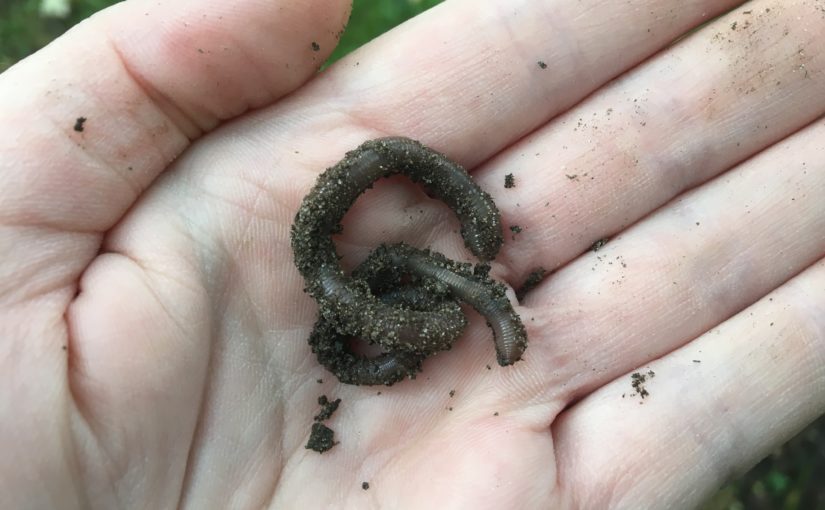 We’d like to highlight one of the greatest threats to Ontario’s natural soil systems – earthworms!

Yes, you read that correctly. Many of us have a hard time picturing earthworms as a destructive force. After all, who hasn’t been told that they’re natural composters, food for cheerfully bopping robins in the spring, and great recyclers in our gardens?

But there’s one important fact about earthworms that most people aren’t aware of: they’re not supposed to be here.

What was once gone… When the glaciers retreated, they left behind earthworm-free ecosystems. For thousands of years since then, our ecosystems have evolved to recycle nutrients and decaying organic matter through a multitude of fungi, invertebrates, and bacteria.

And then, the earthworms arrived.

Not a friend to all of our native species

Earthworms are what we call ecosystem engineers.

Just like our beloved beavers, they have the ability to change the basic processes and structures of an ecosystem. They do this through burrowing in the soil and feeding on the leaf litter lying on the ground. These simple actions have severe impacts on soil structure and nutrient availability, thus affecting the plants that grow and thrive in those soils.

Earthworms devour the leaf litter layer much more rapidly than native decomposers, destroying the thick protective layer of decaying leaves most of our native plants and insects rely on. Native plant roots have a difficult time growing in the dense soils produced by earthworms, while non-native plants that are better suited to dense soils have an easier time establishing themselves. Earthworms have been linked to a host of other invasive species and have already wreaked havoc on our local ecosystems.

Once an area is invaded by a species of earthworm, there is no known way to remove them. But the good news is that it’s very easy to keep this wriggling invading force from extending their front lines. Earthworms move very slowly on their own; they’re mainly transported through human actions.

At first, this meant hitchhiking in soils and plants brought over by settlers and pioneers, either as grown worms or as egg sacs. Now earthworms are spread through landscaping, vehicle and footwear treads, transporting soils for construction, and most notably, through fishing.

What on earth(worm) can I do?

Some simple ways to help stop the spread of earthworms and protect our soils are:

These small steps can make a big difference in Ontario’s forest ecosystems.

Learn more about invasive species and the threat to Ontario’s biodiversity.