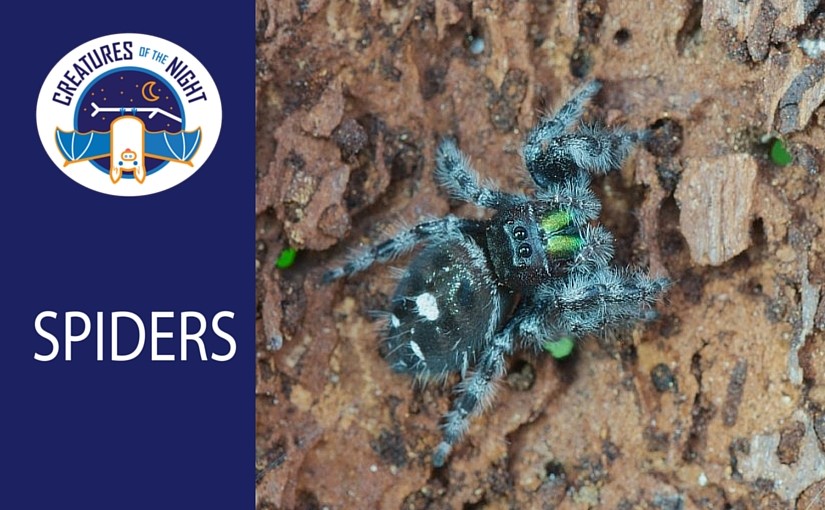 Are you afraid of spiders? Our eight-legged friends are the kind of “creepy crawlies” that many people like to pretend don’t exist.

One of my goals as a naturalist is to break down those barriers with fun facts that can make those “less-appealing” creatures sound like they would be a hoot at any of your Halloween parties.

Here are 8 of my coolest spider facts:

1. Eight is the magic number in the spider world

As a member of the arachnid family, these loveable beings are characterised by eight legs.

This sets them apart from other members of the arthropod phylum. They also have the typical count of eight eyes.

2. All spiders can produce silk, but not all spiders make webs

In fact, spider silk can be used for a variety of things, from the classic web-creation to bundling their eggs to carry around with them, or even ballooning (the dispersal of spiderlings on wind currents).

Take our beautiful bold jumping spider here, for example. The jumping spider hunts by jumping on its prey, but it often uses a silk dragline as a safety harness in case it misses its mark.

3. Our spider friends understood the concept of “waste not, want not” long before we did – and on a much grander scale

Before building a new web, orb-weavers and some other web-building spiders, eat their old webs to recover those proteins. Through the use of radioactive tagging of web material, it has been discovered that 80-90% of the previous web material shows up in the new web.

4. All spiders are predators – but hunting techniques differ between spider families

For example: goldenrod crab spiders use camouflage to blend into the flowers they sit on, waiting for the arrival of unsuspecting prey. They have the ability to change their colouration from yellow to white, depending on the colour of the flower they choose for the day.

Instead, they use a special digestive enzyme to turn the insides of their prey into a liquid lunch – often leaving behind the seemingly intact, yet empty, prey. You’ll never look at juice boxes the same way again.

6. You can check a spider’s gender by looking at its face

No matter what species I am talking about, everyone always wants to know how to tell the boys and girls apart. And here’s the trick for spiders: check out its pedipalps (the two small appendages in the front of its face).

7. Males risk being eaten during courtship

Since females tend to be larger than the males — and also quite voracious predators – male spiders run the risk of being eaten during their courtship.

The male must be careful in the approach by gently plucking the outer edges of the web, indicating his presence, then slowly making his way to the centre of the web where the female waits. One wrong move, and he’s dinner. And he’s only got about twenty seconds to impress her. Talk about a high pressure environment!

Check out this clip of the courtship of two marble orbweavers on Harrison Trail in Rondeau Provincial Park:

8. Harvestmen, or daddy longlegs, are a member of the Arachnid class, but are not considered spiders

While they do have the eight legs, which classifies them as an Arachnid, they only have one body part and two eyes. They also do not possess venom or a delivery system to inject venom. That should nip that myth in the bud.

Want to learn more about the spiders of Ontario?

Grab a field guide! A couple of the best ones out there right now are:

Then head outside (or even inside) and start exploring. You can find spiders almost anywhere!

Some parks even offer programs specifically geared towards spiders, along with other arthropods.

If you can’t identify a spider, snap a photo and tweet it to us tagged #AskanOPNaturalist. One of our naturalists will happily tell you what you saw.

Read about Ontario’s other “Creatures of the Night” here.