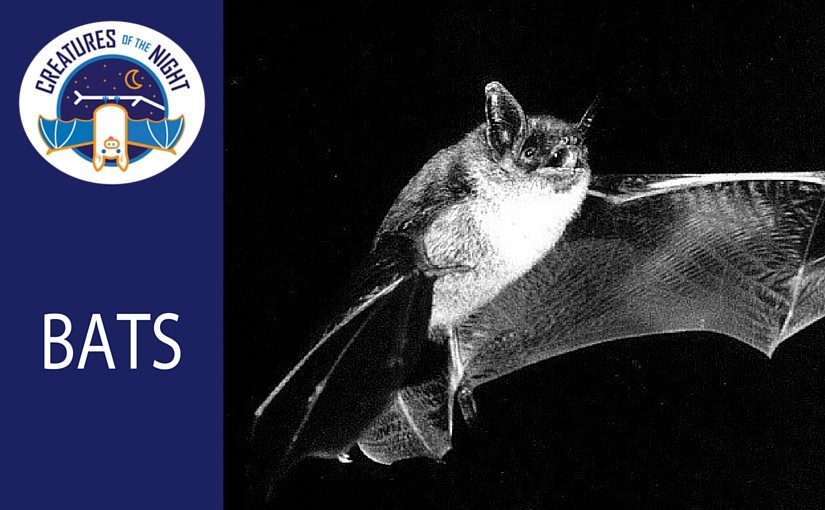 Every Halloween, we are bombarded with spooky images: haunted houses, cemeteries, dark nights, deserted roads and — of course — bats!

But how did such an amazing mammal get such a bad reputation? Maybe we have Hollywood (looking at you, Dracula!) to blame for some of the myths and misunderstandings surrounding these creatures of the night.

But I’m here to set the record straight!

Here’s a collection of facts to help you learn to love (or at least respect) bats:

1. Bats fly with their hands

Bats are truly the only flying mammal (don’t be fooled by imposters…we’re on to you southern “flying” squirrel). Bat wings are unique, being supported by the arm and four greatly elongated fingers which puts bats in the order chiroptera which literally translates to “hand wing.”

Globally, there are over 1,000 species of bats which account for 25% of all mammal species!

Gigantic flying foxes can have wingspans of up to 6 feet while the Bumblebee Bat from Thailand weighs less than a penny!

4. In Ontario, there are 8 species of bats

All of Ontario’s bats are insectivores, meaning they eat only insects. Many species can eat anywhere from 1000 – 3000 insects per night. Now that’s what I call fast food!

5. Contrary to popular belief, there are no blind bat species

In order to locate their prey in the dark of night, many bat species rely on a highly developed sense known as echolocation. When echolocating, bats emit a series of calls that bounce of the objects around it – basically allowing it to “hear” its surroundings.

When the bat locates an insect, the echolocation calls may increase to around 200 calls per second! This is known as a feeding buzz and allows for greater accuracy during the hunt.

Luckily for us, echolocation calls are too high for human ears to hear. If we could, they would be louder than your smoke alarm, and it would be very hard for us to get any sleep!

6. Bats are key elements in rainforests and deserts

These ecosystems rely on bats to pollinate flowers and disperse seeds. If you enjoy the occasional margarita, you can raise your glass to bats! Bats are the primary pollinators of Agave plants, which are used to produce tequila.

7. The vampire bats of Central and South America don’t even suck blood…

…they lap it up like a kitten drinking milk! Okay, yes, these bats do drink blood. But relax: these tiny bats feed mainly on the blood of sleeping livestock, and many times their host isn’t even awoken during the process. Upon returning home with a belly full of blood, vampire bats often share the bounty of their blood meal with unsuccessful roost-mates and have even been known to care for orphaned pups – such loving creatures!

And did you know: the anti-coagulant in vampire bat saliva has led to the development of a new treatment for stroke patients!

8. For such a small mammal, bats are extremely long-lived

The oldest insectivorous bat recorded to date lived to the ripe-old age of 41!

To counter such a long lifespan, most Ontario bat species will only have one pup per year. But the new mom will definitely have her hands full. These little bundles of joy often weigh up to 25% of the mother’s weight and are voracious feeders, often consuming their own body weight in milk each day!

9. Bats play a vital role in our ecosystem, but many species in eastern North America are in serious decline White nose syndrome affects hibernating bats by causing them to wake more frequently, and search for food and water when it isn’t available. This burns precious fat stores and eventually leads to the bat’s death. This disease is caused by a cold-loving, non-native fungus that was first identified in New York State in 2006. It has rapidly spread eastward and into Canada and has killed an estimated 6 million bats!

Want to learn more about the bats you can see in Ontario?

Grab a book. The Photo Field Guide to the Bats of Ontario or any bat book by Dr. Brock Fenton will help you determine what species of bats are found in your area.

Since bats are nocturnal, you may need more than a field guide to help you identify what species is swooping around your streetlight. Relatively inexpensive bat detectors can be used to convert the ultrasonic echolocation calls of bats to sounds that we can hear. With a little practice, you can learn to recognize different bats by their calls.

Many of our parks offer bat programs where you can head out for an evening stroll with a naturalist and listen to the calls and chirps of echolocating bats through a bat detector! What a great way to spend the night!

Have a question about bats? Tweet us at #AskanOPNaturalist and one of our knowledgeable naturalists would be more than happy to help you out!