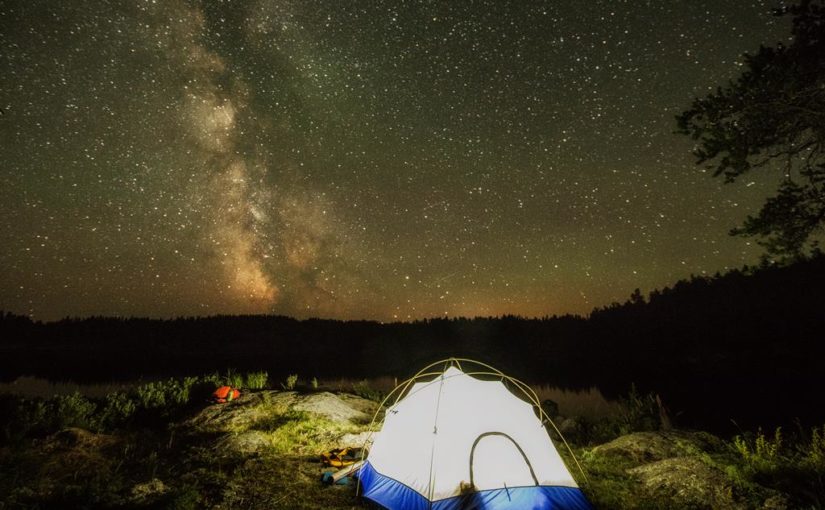 In this month’s featured constellations, we will discuss the Summer Triangle and the constellations of Lyra, Cygnus, Aquila, and Scorpius. High overhead, as seen at the end of July twilight (which tends to last until near midnight), are three very bright stars that make out an upside-down isosceles triangle: While the Summer Triangle is quite noticeable, it is not recognized as an official constellation. From city skies, it is sometime all one can see through the light pollution. However, in the often pristine skies visible in our parks, we can see much more of the constellations that each one of these stars anchors.

Vega, a beautiful blue star, is the brightest in the small constellation of Lyra the Harp. The name “Vega” comes from the Arabic al nasr al waqi or “swooping eagle.” The harp is said to be the instrument made by Hermes, son of Zeus, and used by Orpheus. The other interesting object is the ring nebula M57 (number 57 in Charles Messier’s catalogue). This smoke-ring-looking object is actually discarded gas given off by a star near the end of its life. The core of the star remains in the center, but you need a good telescope to see it.

Cygnus the Swan: a bird of many feathers

To the east of Lyra is a much larger pattern of stars that forms a cross. Four stars running north to south from Deneb are met with three stars running east to west. This pattern forms the “Northern Cross” that many people have learned to find. The name of the star Deneb comes from the Arabic “Dhaneb” meaning “tail” (as in tail of the bird).

So where is the bird? There are at least two birds hidden within the same stars. The Anishinaabe people recognize a beautiful crane lying among these stars. The star Deneb is the tail of the bird and its body stretches down the long axis of the cross. By adding one star on each side of the short axis of the cross, we complete the wings.

The ancient Greeks envisioned these stars as a swan representing Nemesis, in her escape from Zeus. The head of Cygnus is marked by a star known as Alberio. Alberio is one of the most beautiful double stars in the sky. A blue and gold pair are visible in a telescope of even lower power.

Running through Cygnus is a band of light broken up by some dark patches. This, of course, is the Milky Way. It is formed by the light of millions of distant stars. They are so far away that we cannot see the individual points of light but the combined glow of their merged light.

A careful look with binoculars reveals the myriad of stars within. Indigenous traditions recognize this region as a river upon which their ancestors travelled in the afterlife. The stars in this area were the campfires lit by those ancestors as they traversed the river.

The last star of our summer triangle is Altair. The name Altair comes from the Arabic “al nasr al tair” or “soaring eagle.” Altair marks out the eye of the eagle and the body stretches down and towards the west. Altair is a fascinating star in that it rotates incredibly rapidly – once every nine hours (compared to about 25 days for our sun). The Milky Way continues to run down through Aquila towards Sagittarius. A binocular view through this area reveals many star groups and clusters of stars.

Perhaps one of the most surprising revelations that was uncovered in the past few years is that the brightness of a star does NOT indicate how close it is to us. In fact, some dim stars are quite close while some bright stars are quite far away.

Take the Summer Triangle, for example. All the stars look about the same brightness but, as we will soon see, they are at very different distances. Since nothing can travel faster than a beam of light, the light that we see from Altair (16.7 light years away), left us 16.7 years ago. Imagine a courier asked to bring us a package from the star Altair. This intergalactic space courier travels at maximum speed (the speed of light) and since Altair is 16.7 light years away, it takes the courier 16.7 years to reach us.

The light that we see today from Deneb left the star about 2,500 years ago. One of the furthest objects that we can see in a dark sky is the Andromeda Galaxy. At 2.5 million light years away, the light that we are seeing now left the Galaxy during the early Stone Age! When we look to the heavens, we look back in time to the beginning of everything.

Down and to the right of Aquila the Eagle is Scutum the Shield. Scutum looks just like a mini Corona Borealis (see the June edition). Scutum’s full name is “Scutum Sobiescianum” or “King Sobieski’s (of Poland) shield.”

Towards the lower right side is a fuzzy patch. This is a beautiful open cluster known as M11 or the “Wild Duck” cluster. Stars are born from interstellar gas clouds that have condensed into balls of rotating gas. Under the extreme pressures from the mass of gas, star cores become hot enough to fuse hydrogen into helium.

Eventually, over time, the original interstellar gas cloud disperses and what is often left behind is a loose cluster of a few dozen to several hundred stars. That is what we are seeing when we view M11: the remnants of star birth.

The final constellation for this edition is that of Scorpius the Scorpion. The bright red star Antares, meaning “rival of Mars,” marks the heart of the scorpion. Two claws extend towards the right (west) from Antares and the body extends towards the left (east) ending in a very well-formed stinger.

This is one of the best looking constellations (in terms of it looking like what it is supposed to represent!): The star Antares is a luminous red supergiant in the final stages of its life. It is truly massive. In fact, if you were to replace our sun with Antares, the planets Mercury, Venus, Earth and Mars and much of the asteroid belt would all be within the outer atmosphere of the star itself.

This is a very rich area of our Milky Way with gas clouds, clusters of newly formed stars and globular clusters found in droves. When we look in this region, we are actually looking near the centre of our Milky Way galaxy.

Inspired to stay up and observe these night skies?

Take a peek at our monthly astronomical highlights for more info on what to look out for.