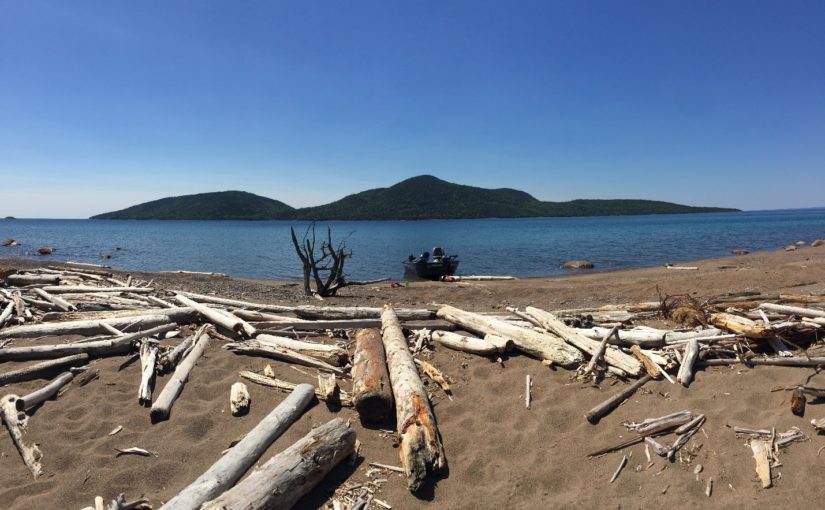 If you have ever visited Neys Provincial Park, you know that it’s a gem found along the northern shore of Lake Superior.

Neys is known for its beautiful scenery along Superior’s rugged coastline, home to Lawren Harris’ famous painting “Pic Island,” and even has a history of being one of several POW camps located throughout northwestern Ontario during World War II.

What Neys isn’t quite as well known for? The excellent fishing opportunities found along that same rugged coastline.

Since Neys is located along Lake Superior, there is potential to catch multiple fish species in the same general area. Common fish caught along the coastline, or a little further out by boat, are Chinook and Coho Salmon, Lake Trout, Whitefish, Steelhead, and even Lake Superior Pike. One fish in particular has taken my interest. Over the past eight years, I have been able to participate in a long-term monitoring project with the Upper Great Lakes Management Unit to study this species. This fish species is the Brook Trout, or more specifically the Lake Superior Coaster Brook Trout.

Where do I find Coasters?

Coasters (as these fish are more commonly referred to) are Brook Trout that reside mainly year-round in the frigid waters of Lake Superior, and are an extremely aggressive fighting fish. The Coaster is often more silver in colour compared to its inland counterpart.

These fish spawn and reproduce in September and October in the smaller tributaries and streams feeding into Lake Superior. They then head back out into the big lake for the remainder of the year.

This pattern is reflected in the open angling season for Coaster Brook Trout, as you may only pursue them from the fourth Saturday in April until Labour Day. This information can be found under Fisheries Management Zone 9, under the Ontario Fishing Regulations Summary.

Coasting the coast for Coasters

The question is: what exactly goes into studying the Coaster population at Neys Provincial Park?

The simplest answer is a lot of time spent fishing from early May to late August along the beautiful shoreline of Neys Provincial Park (which I think a lot of people wouldn’t mind doing at all).

The scenery and chance to spot wildlife alone always make the trip well worth it, but hooking into some beautiful fish is always a bonus!

Our monitoring starts once we catch one of these beautiful fish. Once a Coaster is hooked and brought into the landing net, we quickly take the lure out of its mouth, get a quick measurement, and place the fish in the live-well to decrease the stress put onto it.

Once the Coaster has had a chance to recover fully, a floy-tag is inserted into the back of the fish. The floy-tag is a fluorescent orange or yellow colour with a serial number that identifies that specific fish on one side, and the phone number for the Upper Great Lakes Management Unit on the other.

If that same fish is caught by us, or other anglers at another point in time, they are encouraged to measure the fish and report the serial number.

Once the fish is measured and tagged, a small piece of the fin is removed from the fish to be sent in for age interpretation back in Thunder Bay.

How is the study going?

Over the past eight years, we have caught and released approximately 250 Coaster Brook Trout. On average, you can catch anywhere from 5-10 Coasters in an outing, if you know how to fish for them. Plus, with a little luck, we always have the possibility catching even more!

What does this mean for the fishery? Well, like all fisheries, there are good years and bad years, as natural cycles occur in fish populations. Besides, there are years where the Coasters’ size can vary quite a lot. Our last outing at Neys produced 21 Coaster Brook Trout, five pike, and one Lake Trout within 10 hours of fishing. That averages out to one catch every twenty-two minutes!

The Coasters ranged from 10” to 22”, which is very promising. This shows that not only is there an established population of larger fish, but that the fish are still reproducing from year to year.

All the fish we capture around Neys Provincial Park have a quick picture taken and are released back into Lake Superior so that they can grow for future years.

Personally, I like to promote a conservation approach when angling for Coaster Brook Trout, as they are a sensitive fish to handle and also such a beautiful fish that one should merely enjoy the opportunity to catch one before releasing it.

Tips and tricks to landing a Coaster

If you are looking to head out and catch your own, then the best spot to find them is — as its name implies — along the coastline of Lake Superior. These fish love structure in the form of large submerged boulders and reefs, where they hide and ambush prey when it swims by.

Some of the best lures to use when targeting Coasters include jig flies, spoons and spinners. A single hook is preferred to put less stress on the fish when captured, and ensures that they have a greater chance of survival upon release.

Where do we go from here?

I still plan on fishing each year at Neys Provincial Park for the opportunity to catch beautiful Coaster Brook Trout. Although we do not keep any fish caught during the monitoring, the sheer enjoyment of angling for an aggressive fighting fish is always worth putting the time in.

It is also interesting to see how the data unfolds over each given year, and how many new Coasters come into the area, as well as having the same fish recaptured from year to year in some instances.

All that I know is that as long as there is a healthy population of Coaster Brook Trout around Neys, I will be out there fishing.