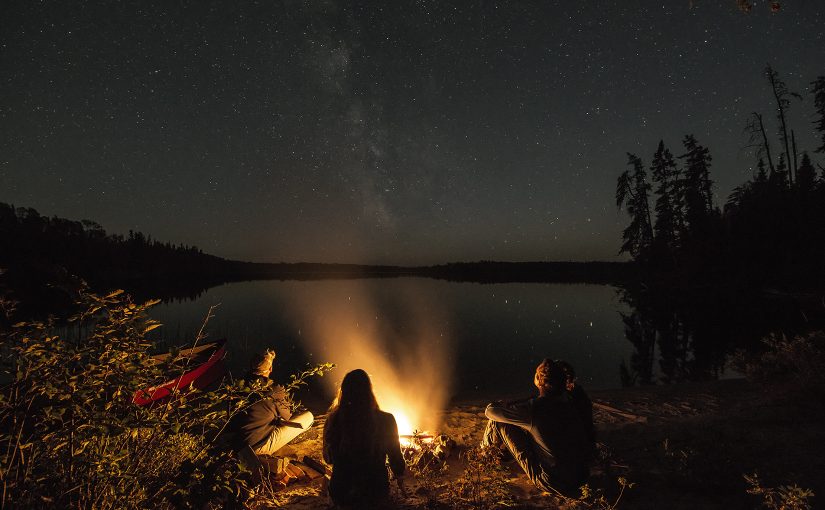 November is the perfect time for stargazing.

Even though the temperatures are cooling down, the early sunset and later sunrise provide us with almost fifteen hours of darkness in which to observe nighttime splendors. Plus, there are some exciting occurrences lighting up the skies all month long.

Why not take some time this month to view these celestial splendours?

There are many interesting objects to view in the November skies. Perhaps the most interesting of all is the Andromeda galaxy.

In the October edition we discussed the Pinwheel galaxy – M33. It is a close cousin of the much larger Andromeda galaxy, or M31.

The Andromeda galaxy is one of the most distant objects that is easily visible to observers from very dark skies, like those in our parks!

Distant stars, such as Deneb, are 2,500 light years away (that’s the distance light travels in a year, or about 9.6 trillion kilometres). The Andromeda galaxy, on the other hand, is about 2,540,000 light years away.

The Andromeda galaxy is a spiral galaxy with active H2 regions. These are the reddish areas where active star formation is occurring.

It is so large that the best views of it for the average person are not through a telescope, but with a good pair of binoculars. With a telescope, there is too much magnification, which spreads out the light and makes it hard to see.

Galaxies are giant organizations of gas, dust, stars, planets, and other interesting objects. The Andromeda galaxy is the largest member of our local group of galaxies, which includes our Milky Way, the Pinwheel, and about 20 other galaxies of various sizes.

Nearly all galaxies are perceived to be moving away from us due to cosmic expansion of the universe. However the Andromeda galaxy is moving towards us, and we expect a collision to occur in the future.

Not to worry though, the projected date of this collision is about 4.5 billion years in the future! A variable star is a star whose brightness changes over time.

There are many reasons why a star can appear to change brightness. Sometimes a bright star may be in an orbit around a fainter star. When the fainter star passes in front of the brighter one, we see the the overall brightness of the stars drop. Sometimes a star enters a phase of its life where it goes through a period of changing amounts of energy output.

In the fall skies, we have three prominent variable stars that are quite interesting.

Algol, in Perseus, is an eclipsing binary star. This is a fainter star passing in front of a brighter one. As a result, it loses half its brightness in just under 3 days. This star is also known as the Demon star and, perhaps appropriately, marks out Medusa’s head.

Mira, in Cetus, is a slow period variable star that varies in just under a year. Its change in brightness is significant. It varies from being visible in an urban light-polluted sky, to being too faint to see even with binoculars in a very dark sky site. Mira is a red giant star that is losing mass to a nearby white dwarf star.

In this photo (below left) taken by NASA’s Chandra X-ray Observatory, we can see the red giant on the right and the gas swirling around the white dwarf on the left (as portrayed at right).

Delta Cephei is a reasonably bright variable star in Cepheus. It is another variable star experiencing instabilities in its outer atmosphere. Delta Cephei represents a class of variable stars – Cepheid Variables – that are extremely important to astronomers in distance determination. Cepheid variables are very bright stars and the period of their variability is directly related to their peak energy output.

To measure the distance to a galaxy, all an astronomer has to do is find some Cepheid variables and measure their periods. Then they compare the observed peak brightness of those stars to that of Delta Cephei. They can use a simple equation to calculate the galaxy’s distance.

This is exactly what Edwin Hubble and his team did to determine the distance to the Andromeda back in the 1920s. The Leonid meteor shower peaks on the morning of November 17-18. At this time viewers in dark skies may see between 15 to 20 meteors per hour.

While not consistent, at times Leonids can provide extraordinary showers. This year’s shower is looking to not be that exciting, however viewers in the past have seen as many as 70 thousand meteors per hour. This truly remarkable sight is known as a meteor storm rather than a shower.

The best time to observe this shower is after 1:00 am, at which point the view of the night sky is starting to face in the same direction as the earth’s travel around the sun.

For a thorough explanation of meteor showers, check out this link.

For more details on November’s skies, check out our Eyes on the Skies post.