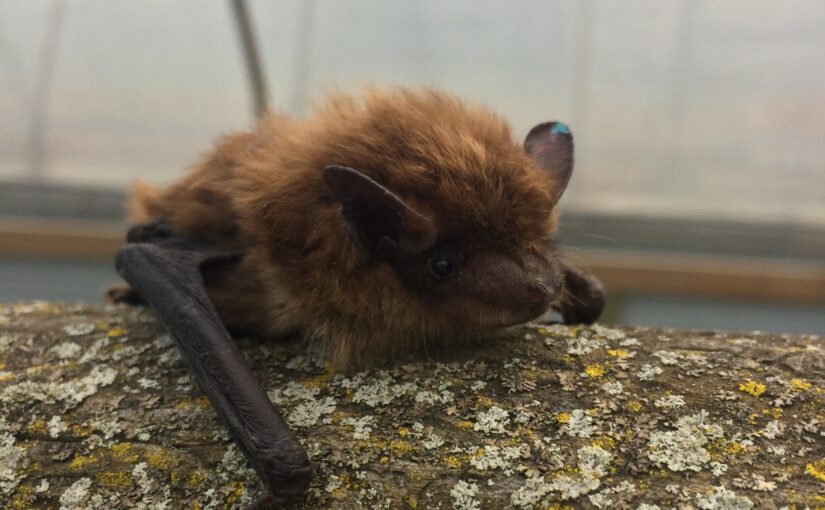 Today’s post comes from Ashley Hanas, a Bat Technician with the Friends of Pinery Park.

Bats are the only true flying mammal.

There are currently over 1,400 species and bats encompass 20% of the mammalian species on earth (meaning 1 in 5 mammals are bats!).

Bats are essential to the health of our environment, providing indispensable ecosystem and economic services in the form of prolific insect pest control, pollination of plants, and dispersal of seeds.

Their droppings, or guano, are rich in phosphorus and nitrogen, making it a highly effective fertilizer.

Despite the numerous benefits bats provide us, their reputations are marred by negative misconceptions.

Many people strongly link bats with vampires and are frightened by them. This fear increases around Halloween, when bats and vampires tend to be at the forefront of Halloween-influenced media.

But, how did this link between bats and vampires come to be?

Vampire Bats do indeed exist, though vampiric myths long outdate the discovery of these creatures.

The vampire mythology we are familiar with today has Slavic origins, dating back to the 11th century. However, vampire-like legends have persisted in many cultures for millennia.

The blood lapping (not blood sucking!) Vampire Bat did get its name from these ancient tales, however, given they only inhabit Latin America, their existence remained largely unknown to Western society.

It was not until Bram Stoker published his famed book Dracula that people became more aware of their existence and linked all bats with vampires for the first time.

Given that bats were already synonymous with evil due to passages in the Bible, enduring works of fiction by Dante Alighieri (Dante’s Inferno), as well as William Shakespeare (The Tempest, Macbeth, and Midsummer Night’s Dream), Dracula transformed a bat-fearing society into a bat-hating one.

Out of these three species, only the Common Vampire Bat will drink blood from mammals, while the White-winged and Hairy-legged Vampires bats target blood from birds.

As mentioned above, they are found exclusively in Latin America.

Even though they consume blood, they are still amazing creatures with exceptional intelligence and human-like social structures. They forge lifelong friendships, they care for their sick, they assist and provide emotional support to mothers giving birth, and they even adopt orphaned young vampire bats!

When it comes to bats within Canada, all of the species found here are insectivores, meaning they consume only insects.

Despite this, tolerance for bats is still relatively low, with people (likely inadvertently) continuing to link them to negative misconceptions.

It is also worth mentioning bats are not villainized in all cultures. Some consider bats lucky, and frequently use their likeness in motifs, arts and dances.

They are also used as inspiration for coming-of-age tattoos, as symbolic protection for the individual receiving the tattoo (as a mother bat protects her young by wrapping them in her wings).

There are also legends that depict them as heroes and physical manifestations of lost and loved ancestors.

A world without bats

Just for a moment, imagine a world without bats.

Given that bats make up 20% of all mammalian species, this would be an enormous loss to our biodiversity (the number of species within a given area).

High biodiversity is necessary to having a rich, stable environment and the loss of bats would send numerous food webs crumbling.

Certain food crops that are exclusively pollinated by nectivorous bats, such as agave and durian, would become limited in availability or lost altogether. Succulent plants such as cacti would also shrink in population, as many of them depend on bats for pollination.

Forest succession would be reduced significantly, since frugivorous (fruit eating) bats are responsible for spreading the seeds of several fruits they eat.

Lastly, insect populations would skyrocket. A single bat consumes thousands of insects each night. This includes insects that transmit disease (such as mosquitos, which are responsible for spreading West Nile Virus, Malaria, and more) and invasive insects that cause widespread destruction (such as the Emerald Ash Borer).

Bats have protected us and plants for many years

Now it’s our turn to protect them.

Without intervention, many bat species are almost certainly headed for extinction.

White-nose Syndrome has caused bat populations to plummet, with the potential of the Little Brown Myotis (a species native to Ontario) to become ‘regionally extinct’ by 2026. They have also suffered considerably from habitat loss (cutting down large trees, tearing down roost structures, and inhumane exclusions), pesticide use (neonicotinoids) and wind turbines.

Together, these factors have further reduced bat populations as well.

Unfortunately, because bats still elicit fear from the public, they may be perceived as “less deserving” of conservation in comparison to more charismatic species.

However, bats are just as deserving of protection as the rest of the endangered animals on earth.

Not only are the roles they play pivotal, but if you take a moment to learn more about them, you will quickly realize that their uniqueness makes them extremely captivating and endearing creatures.

When it comes to bat conservation, education is key

People will not protect what they fear. In order to preserve our bats, reducing fear is paramount to increased tolerance. This Halloween, take a moment to thank our wonderful, flying friends for all the wonderful services they provide us, and correct others’ misguided views on them.

If you can change even one person’s perception of bats (including your own!) you will have done an incredible thing for the conservation of these amazing animals.