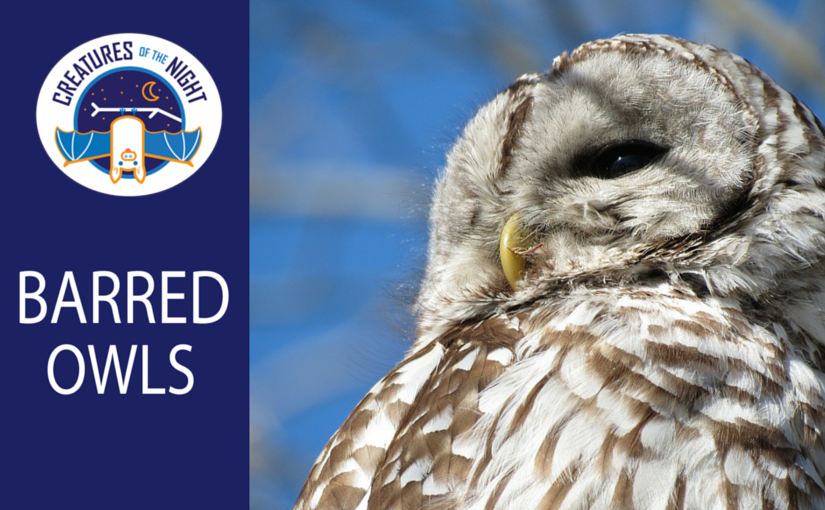 It’s a common question that park interpreters face almost daily during the summer and one that many folks already think they know the answer to:

“Well, I’m pretty sure it was a screech-owl – it was making strange screeching sounds” or conversely, “It definitely wasn’t an owl. It sounded more like a monkey or a weird dog or something.”

More often than not, the sound our campers are hearing is actually a Barred Owl, a common resident of mature mixed forests throughout Ontario and eastern North America.

While some may be familiar with Barred Owls’ traditional hoot — “who cooks for you, who cooks for you all” — very few realize that these owls make a vast array of other calls, including hissing, coughing, barking and the aforementioned screeching.

The screeching and hissing calls are made by (and for) young birds. They are actually a type of contact call and often mean something as simple as “here I am – come feed me.”

I must admit: I didn’t have a clue what I was hearing the first time I heard them. And, yes, they can sound eerily spooky.

What’s on the menu?

Even though their weird calls may conjure up images of wild creatures slowly creeping up on the tent, the Barred Owl is not particularly adventurous and rarely wanders more than from its birth place.

Despite this, it has managed to spread across the Pacific Northwest during the last century and is now found down into California where it is displacing and hybridizing with the endangered Spotted Owl. They are even known to kill their smaller relatives and even to hunt the diminutive Saw-whet Owl. It’s certainly strange to think that owls go around hunting each other but that’s the way it is.

However, with a wingspan of just over a metre and a weight of about a kilo, even the Barred Owl is not safe. A Great Horned Owl won’t think twice about spoiling its day (or night). The fact that the Barred Owl is pretty much sedentary has implications for winter survival. Fortunately they feed on a large variety of small animals, including squirrels, chipmunks and voles, as well as many types of bird, up to the size of a grouse.

How long do Barred Owls live?

If the owls have a good breeding season followed by a tough winter, the “surplus” of owls will unfortunately fall victim to a food shortage and many birds will become weakened and die. Without the option to fly south, an ice-storm will produce similar results since many of the prey items will be stuck below the snow.

However, if all goes well, Barred Owls are known to live for over 20 years. The oldest on record lived to be 24 years old. Their longevity, sedentary behaviour, and large size mean that, of all the owls found in Ontario, the Barred Owl is definitely the one easiest to locate.

How to spot a Barred Owl

In the spring and summer, it is calling birds that tend to give away their presence. With a little patience and some searching, you may even see some of the young birds begging for food from their parents. Most nestlings fledge during June and early July.

If you are lucky, you may encounter one while walking in the woods. When startled, they tend to fly away rather than rely on their camouflage, so getting too close is not a good idea. In winter, when the leaves are down, seeing a Barred Owl becomes much easier (so long as you can brave the weather yourself!).

In fact, it is during the winter that you may get to see another interesting aspect of the Barred Owl – something shared by all owls actually.

In the photo below, you’ll see that the owl appears to be yawning. What is actually happening is that this bird has finished digesting its meal and is in the process of coughing up an “owl pellet” – all the indigestible bones and fur from its last meal.

These pellets are stored in a structure called the proventriculus for up to 20 hours. Since this partially blocks the entrance to the digestive system, pellets must be ejected before the owl can eat again.

Another fascinating behaviour that young Barred Owls are known to have is the ability to climb trees by using their beak and talons to grip the bark and then “walking” up the trunk whilst flapping its wings for balance. They only do this for a brief period when learning to fly and it is something I’ve personally never seen.

So next time you’re creeped out by weird calls at night?

Consider the Barred Owl’s incredible life story and struggle for survival and take a look outside your tent. With a bit of luck, you’ll spot an owl.