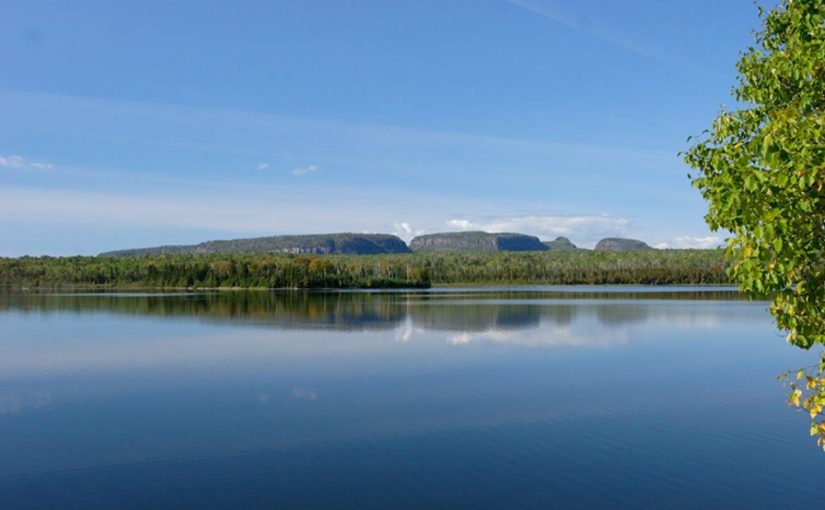 Today’s post comes from Will Oades, with the Discovery Program staff at Sleeping Giant Provincial Park

As we near the end of Sleeping Giant Provincial Park’s 75th anniversary, it’s hard not to look back on all of the rich natural and cultural history that has shaped the park into the place we know and love today.

Our forests are serene and home to some of North America’s most elusive flora and fauna. Although there are many wonders that call Sleeping Giant Provincial Park home, it hasn’t always been that way. From its cultural heritage to its intriguing natural history, Sleeping Giant Provincial Park has a diverse background that has shaped it into the place that it is today. Let’s take a quick look at all of the things that have created our fondly called “Sleepy Gee” into the park it is today.

Off to a rocking start

Believe it or not, Sleeping Giant has quite the geological history. Now for those of you who think that geology is boring, bear with me. By the end of this you’ll truly realize how much it rocks! (Get it? It’s a geology joke!)

About 1.1 billion years ago, around where the Sibley Peninsula is now, hot magma rose up through nooks and crannies in sedimentary rock and was deposited in a horizontal layer called a diabase sill.

This magma solidified into super tough igneous rock that’s quite hard and tough to erode, while the sedimentary rock that surrounded it is relatively soft and is quite easy to erode.

Skipping ahead in time to around 31,500 years ago, the Wisconsin Glacier moved through and into the area. The glacier scooped the rocks and dirt. In fact, it was the erosional habits of this glacier that shaped the physical landscape of Sleeping Giant.

As the glacier scooped up and eroded all of the soft sedimentary rock, the harder igneous diabase sill that was deposited, and acted as a cap that protected all of the rock underneath it. All that was left after the Wisconsin Glacier retreated was the five mesas that make up the Sleeping Giant formation itself, as well as some leftover sedimentary rock. As the glacier made its retreat about 9,000 years ago, the various sediments it left behind created the fertile soils that support the rich plant and animal life that surround us today!

The start of a small mining community

With lead engineer and Superintendent William B. Frue leading the operation, the mine was able to extract approximately 3.8 million dollars worth of silver throughout the 13 years that the mine was active. As mining operations began to develop, a small community was established along the adjacent shoreline to provide a life for families of the miners, as well as creating a haven and escape from the hardships of the mine.

A church, store, school, hotel, bar and library were all built. It helped to create a well-rounded life on the mainland. While the miners were hard at work nearly 384 metres under the raging seas of Lake Superior, wives, children and family members of miners were able to go to church, school, hunt and fish! Amongst the women of Silver Islet, séances became quite popular as a means to speak to their deceased loved ones. Along with those performing the séances, there are some noteworthy people rumoured to have participated in them including: Sir Arthur Conan Doyle (British writer and creator of Sherlock Holmes character) as well as Winston Churchill (former British Prime Minister)!

These séances were often hosted in the cemetery at Silver Islet. However, there were also several séances held in houses along shore and because of this, many buildings onshore are claimed to be haunted, even to this day. After the mine was closed, the buildings on the islet itself were left to decay while the buildings onshore continued to be used. Today, the community of Silver Islet thrives in the summer with the shore lined with some of the original miner’s homes, converted into private cottages.

Did you know that without the community of Silver Islet developing, way out on the tip of the Sibley Peninsula, there might not have been roads built all the way out here, and Sleeping Giant wouldn’t be the same as it is today?

Life after the mine

Next, picture this. It’s the winter holiday season. You get your house fully decorated and get together with your family to pick out the perfect tree. But this year is different. This year, you decide to go out in your backyard to find a tree from the forest around your house!

You spend nearly a full hour stomping through deep snow getting completely soaked before you finally find the perfect tree. Out comes the ax and down goes the tree. “TIMBER!” Except, instead of a six-foot Balsam Fir, it’s an 80-foot Black Spruce, and you’re working for the Port Arthur Pulp and Paper Company as the top sawyer in your camp.

That’s what life was like out on the Sibley Peninsula about 100 years ago. The sawyers (loggers) worked year-round cutting down pulpwood and pine trees in the forest on the Peninsula. Throughout the logging history on the peninsula, a total of 31,299.75 cords of wood was cut, with most of it being pulpwood. The large pines that scatter the peninsula were also collected, but the company was more interested in the peninsula’s pulpwood.

The logging camps that were dispersed across the peninsula and logging techniques of the time resulted in changes to the local ecosystem. The trees cut down served as protection, food, and homes for many organisms and species. In fact, the population of caribou that once called the peninsula home, left the area and haven’t been seen there since 1946.

Logging operations ultimately came to a halt on the peninsula in 1937 as plans were being made to protect the land and open up a provincial park in the area.

Historical artifacts may be lying just inches beneath your feet

Today, if you play around in the dirt at the park, you can find all sorts of neat things! Colourful rocks, squirming insects and sometimes even animal remains are all scattered throughout the soil, and can be found by doing even the littlest bit of exploring.

One farmer from the nearby community of Pass Lake area, just north of Sleeping Giant Provincial Park boundary, discovered something quite unusual while tilling his land. In the mid 1900s, Jorgen Brohm discovered some interesting rocks. He quickly realized that these were no ordinary rocks, and eventually word got through to Richard “Scotty” MacNeish, archaeologist for the National Museum of Canada that something special had been discovered in the Port Arthur Area. MacNeish came to investigate Brohm’s findings and upon excavating the 51 m2 area, discovered 82 artifacts and hundreds of fragments of artifacts. The artifacts were buried about nine inches into beach gravel under about six-inch layer of dirt. MacNeish brought back 30 artifacts to study and through radiocarbon dating was able to date it back about 8,000-9,000 years ago to when the first people to inhabit the peninsula lived here.

In fact, it was determined that the Aqua-Plano group of Indigenous peoples were the first to inhabit the peninsula after the glacier retreated. While the glacier was retreating, there was a strip of land between the glacier and the lake. This served as the only corridor to get from one side to the other, and Indigenous hunters would use this corridor to trap caribou from either side. The Brohm site is the oldest known site in the Lake Superior Basin and led to a lot of interest in the rest of the peninsula to see what might be lying merely inches underneath our feet!

What’s in a name?

Moving ahead in time to 75 years ago, we get to when the park was first opened. The park was originally named Sibley Provincial Park.

In 1988, in order to recognize the iconic landform formation and tourist attraction known as the “Sleeping Giant,” the park was renamed to Sleeping Giant Provincial Park. Today, the park boosts over 100 km of hiking trails, 40 backcountry campsites, the Marie Louise Campground with its Visitor Centre and Discovery staff offering a suite of educational interpretive programs, and day use areas for friends and families to enjoy the natural beauty that the park has to offer. Memories continue to be made and connections are built as people bond over the wonderful experiences that Sleeping Giant Provincial Park has to offer over its rich history.