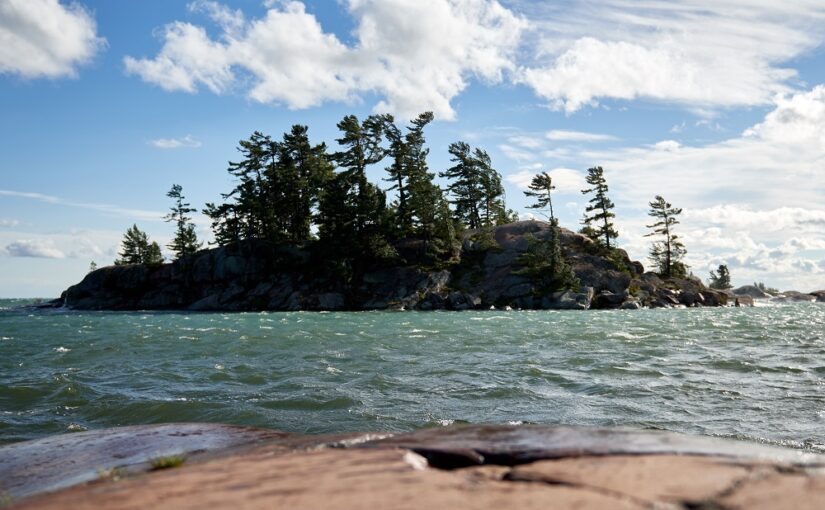 When I was young, we used to play a game where we would stand or sit in one spot, and use our imaginations to create an idea of what might have happened there years before us.

At that age, our ideas were that perhaps dinosaurs roamed in that same area or the princess kissed the frog in that same place hundreds of years ago (and they lived happily ever after!).

Today, I find myself playing a similar game as I explore Killarney Provincial Park.

However, my record of historical events is slightly more accurate.

As I sit perched on the edge of a granite rock, staring off into the La Cloche Mountains, I wonder to myself whether or not influential members of Killarney’s past sat where I’m sitting, walked the same paths, and appreciated the same small details that I noticed along the way. I’m sure many of us don’t take the time to think about the historical figures who may have walked here before us.

In Killarney, those figures could be members of the famous school of Canadian landscape artists, the Group of Seven.

Who were these artists?

While it’s known that the Group of Seven painted in many different places in Ontario, inspired by the unique and beautiful landscape, members A.Y. Jackson, Arthur Lismer, J.E.H. MacDonald, A.J. Casson, and Franklin Carmichael were known to explore the La Cloche Mountains and Killarney’s backcountry.

In fact, A.Y. Jackson and Franklin Carmichael’s passion actually led to the creation of Killarney Provincial Park when they petitioned to stop the Spanish River Lumber Company from logging the area.

In honour of their efforts, two lakes were named A.Y. Jackson Lake and Carmichael Lake. Additionally, Trout Lake was renamed O.S.A. Lake after the Ontario Society of Artists.

Painters of the past and present

The La Cloche Mountains not only inspired this group of painters — whose artwork became a symbol of Canada’s wilderness — but continue to inspire those who spend time here now.

Due to the group’s significance to Killarney and in honour of the 100th anniversary of their founding, we had the opportunity to chat with these local artists.

A journey of inspiration

We asked what the Group of Seven truly means to them, and what they believe the Group means to Killarney. When asked how the Group of Seven inspired her as a Canadian artist, she explained that the members of the group continue to be her teachers and mentors: “The application of composition, paint, the element of colour theory, and the rhythm and harmony projected in their work through different seasons and conditions continue to inspire me.

“They help stimulate my ongoing problem-solving of what is real and what is stylized and fictional. What is the truth of the journey of each scene I observe first-hand from within and reflectively in my studio.”

Brian Atyeo shares similar views on the way the Group inspired him as an artist, and represented the area.

“This, the 100th anniversary of the Group of Seven, is a time of celebration and an opportunity for me to revisit the LaCloche/Killarney landscape for inspiration and direction.

“The Group of Seven played an important role in my early development as an artist — and Canadians are truly fortunate to have them as an early cornerstone in the visual direction of this country that has embraced their impressionistic imagery as our own.

“Wherever you are in Canada, I hope you will join me in remembering the Group of Seven on this: their 100th anniversary.”

Reflecting on the land

A.Y. Jackson and his fellow painters visited Killarney most often in the fall.

If you intend to visit Killarney this fall, I invite you to take a moment and reflect on what the landscape means to you.

What do you see? How does it make you feel? Does it inspire an emotional connection?

Who knows? Maybe A. Y. Jackson sat where you are, reflecting on the land and the steps he could take to protect this amazing place.

I couldn’t have said it better than Brian Atyeo: “Wherever you are in Canada, please join us in remembering the Group of Seven on their 100th Anniversary.”