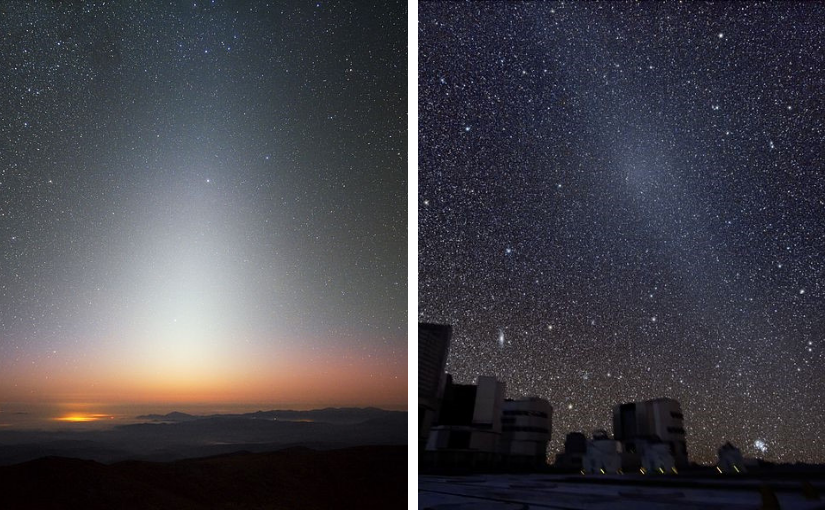 The importance of having dark sky preserves cannot be understated.

In addition to the many benefits already described previously in our blog, you can see many things that others can’t from the light-polluted skies of our urban and, increasingly, our rural locations.

The zodiacal light and the gegenschein are two phenomena known for centuries, but only visible in dark skies with a good western or eastern horizon.

This appears as a very faint glow before sunrise (the east) or after sunset (the west).

Many have referred to the light as “the false dawn.” In fact, it was clearly described in the Islamic religious texts so it wasn’t mistaken with the real dawn (astronomical twilight) that denotes the timing of morning prayer.

The zodiacal light seen in the evening follows the path that the sun journeys on throughout the spring. As such, it is appears higher in the sky during March and can be seen within an hour or so after sunset.

You need a clear, dark, and unobstructed view of the western sky, such as from Lake Superior Provincial Park.

It has long been questioned as to the origin of this mysterious light, though scientists have recently confirmed the source. While long thought to be the light reflected from the dust within our solar system, it’s recently been concluded that that dust is constantly replenished by material originating from comets (rather than asteroids or other sources).

German for “countershine,” the genschein is a somewhat concentrated form of light seen in dark skies under rare circumstances.

You can occasionally observe this phenomenon in the night sky directly opposite from where the sun would be. So if you are looking up halfway in the south at around midnight during the spring or fall, you might be able to see a faint concentrated ball of light: the gegenschein. It’s hard to see in the summer or winter when the Milky Way may outshine this fainter light.

What’s so special about this point?

Well, the combination of gravitational forces of the sun, earth, and moon produce a number of stable gravitational zone points around the earth, meaning that objects at these spots tend to stay locked in those points.

There are five of these “Lagrangian” points around the earth. The second point (L2) is where the dust that produces the gegenschein is located.