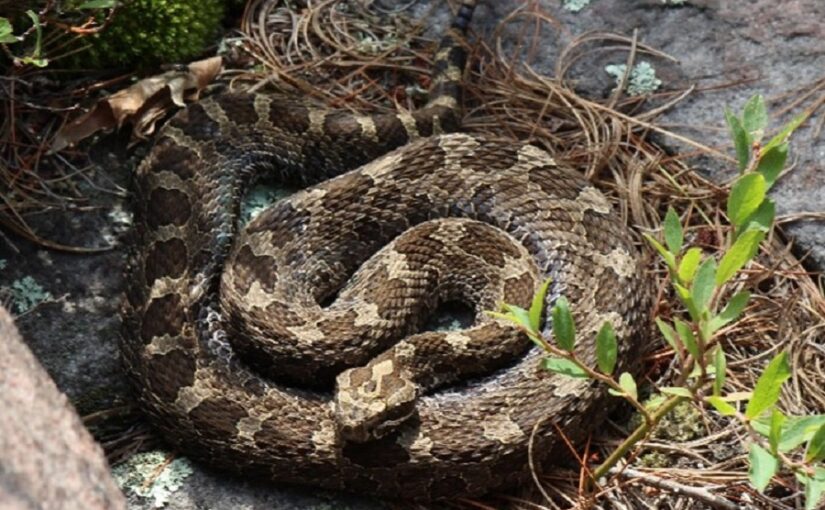 Seeing a Massasauga Rattlesnake (“Zhiishiigweg“ in Anishinaabemowin) can provoke a variety of emotions ranging from fear to fascination.

Unfortunately, fear caused by misinformation exaggerating the danger of rattlesnake bites has caused many to kill rattlesnakes over the past 200 years of European settlement in this province.

The Anishinaabek have a different worldview of the Massasauga Rattlesnake.

This worldview is built upon respect and understanding the rattlesnake’s role in creation.

Learning about this worldview may help guide all of us in our efforts to conserve the natural world.

The Anishinaabek have lived on the shores of Georgian Bay for millennia.

Their traditional teachings about the rattlesnake reflect their tradition of living in harmony with the natural world.

The term bimaadizi loosely translates in English to “living in a good and respectful manner.” Anishinaabek and other Indigenous peoples have built extensive knowledge on how to live in harmony with our nonhuman relations in the natural world (bimaadizi).

The Anishinaabek connection to land allows a strong foundation for conservation in the future. It keeps us connected to creation. It allows us to honour creation with prayers, making sure our spirit is connected to the land.

The Anishinaabek make sure to honour and acknowledge everything under creation.

Many of these lessons are shared through oral stories, ceremonies, and family activities.

The following teachings were shared by Sam Kewaquado, an elder from Shawanaga First Nation, who is no longer with us. We thank him and his family for sharing this knowledge.

“The rattlesnake plays an important part in the natural ecosystem as they are known as a natural protector. They spend much of their time during the summer hiding in blueberry bushes avoiding predators and waiting for prey.

“When people harvest blueberries, the rattlesnake’s job is to remind them with a shake of its rattle to only take what they need and to leave some for other creatures. The rattlesnake ensures that the plants can continue producing fruit in the future for all of creation.

“The rattlesnake has another vital role as a healer. The Ojibwe communities have been taught about the medicinal power which they possess. Medicine men would summon the Nzagima (the Big Snake) with prayer and offerings. “They would advise the Nzagima of illness within the community and would ask for a cure. Wherever the snake’s body twitched, the medicine men would scrape scales off from that part of the body using a wooden spatula and bowl.

“This would then be used to create a potion to heal the ill.”

Killbear Provincial Park continues to work to protect this species along with partners like:

Learn more about living with Zhiishiigweg

For more information about rattlesnakes and to find out some of the efforts Killbear has taken to protect them, check out these other blog articles: