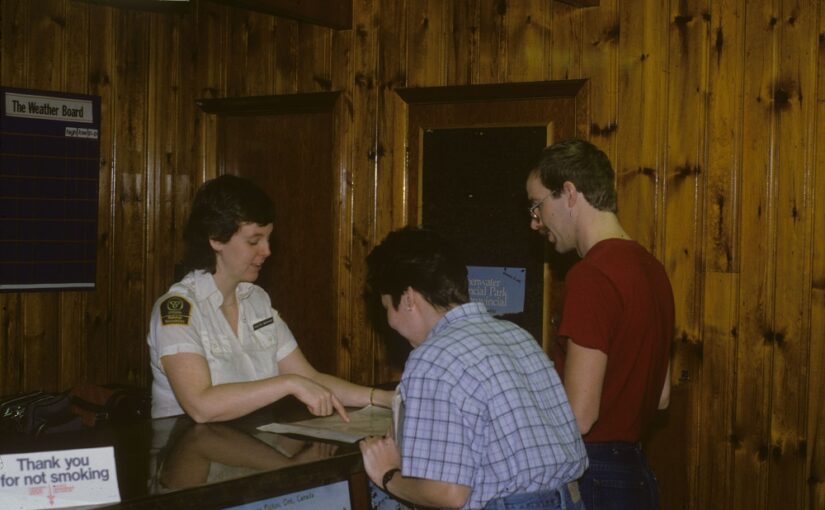 Today’s post comes from Yvette Bree. Yvette has been the park naturalist at Sandbanks Provincial Park for 35 years and retires at the end of August this year.

The year I graduated from the University of Waterloo with a Bachelor of Environmental Studies (B.E.S.) with a Resource Management option.

The year I was married to my high school boyfriend (still going strong).

And the year I got my first job with Ontario Parks.

Starting out at Lake Superior

I was desperate to become a park naturalist. Although we were living in Kingston at the time, I applied everywhere.

My husband, a geologist, was also looking for work. As fate would have it, we both got jobs that started about a month after we were married.

He went to the Yukon, and I began my career with Ontario Parks at Lake Superior Provincial Park. Personal situation aside, I was hooked. Lake Superior was why I chose my career: vast wilderness, wildlife, hiking trails, staff camaraderie, history. This park had it all.

I tried hard, learned lots, made mistakes, and conquered my public speaking fears. I loved the park — and still do! The only problem was that it was so far from friends and family.

I had only been hired for 16 weeks, so at the end of my contract, I headed back home. I became a waitress, and began searching for my next park opportunity.

I went to several interviews that spring. I was just starting to give up hope when I got the call in late May.

I had been applying for assistant naturalist positions, assuming that this was my next logical step. But in an example of “right place, right time,” I was hired as the park naturalist at Sandbanks Provincial Park in 1987. I had never been to Sandbanks and had to find it on a map before my first day of work.

I felt underqualified and read everything that was given to me. Other than a tour of the campgrounds and park facilities, I didn’t get out of my office for the first few weeks.

Other park staff filled me in on how busy the park was and what a great beach it had. I met my two assistants and eventually my four summer students.

Summer came and it was a whirlwind of schedules, programs, campers, and beach-goers.

At the end of it all, the park broke an attendance record — 324,000 visitors had come to the park that summer.

What a busy place compared to Lake Superior!

More than just a beach

I’ve never been much of a beach person, and couldn’t believe the popularity of the park.

It was, however, my foot in the door. I was determined to put in three years here to gain experience before going to a park that was more my style. At the end of the summer, I finally had time to walk the West Lake bar with those “big dunes” I had been talking up at programs all summer.

Words can never describe what I felt as I walked through this rare habitat. I listened to waves and birds, smelled that “park-iness,” identified plants I had observed nowhere else, saw history in front of me in the form of majestic (albeit dead) cedar trees, walked barefoot along the water’s edge with sand between my toes…

This park was not just a beach; it was –- is — a provincial gem. To this day, when the hectic pace of the park gets to me, I can still find my own private, quiet space in those dunes and remember why I didn’t leave after three years.

It’s hard to believe that 35+ years have gone by.

Sandbanks has changed. I have changed. Two campgrounds (Woodlands and West Lake) have been added, providing more electrical sites. There are six trails instead of the original one. The main entrance isn’t where it used to be. We added the Dunes Beach day-use area and comfort stations in the campgrounds. The list goes on.

These days, welcoming over 800,000 visitors in a year is common. In the early days, there were interpretive programs to present, a Visitor Centre to operate, and the occasional trail guide to write.

We were called Visitor Services (VS), which later changed to Natural Heritage Education (NHE), and more recently to Discovery.

As time went by, my department increased in size and became involved in resource management, self-use interpretive guides and panels, social media, and outdoor education opportunities for schools.

We developed special events like Lakeshore Lodge Day and Theatre in the Park. Although I have stayed in the same position, I have gone from being called a Visitor Services Leader to a Chief Park Naturalist. Over the last 35 years, I have presented hundreds of interpretive programs to thousands of park visitors, explaining the significance of Sandbanks and the importance of protecting it.

Hopefully these environmental messages are taken home and acted on there as well.

I have enjoyed working with my staff, most of them high school, college, or university students.

Some were gaining experience for a career in a related field, and a few changed their career paths after working here to become teachers and naturalists themselves.

Many were simply looking for a summer job, but I hope that I have inspired them all to respect the environment and encourage others to do so as well.

As my career with Ontario Parks winds down, I can look back on what has been achieved and what is still to be accomplished. There is always more to do, new projects to work on, new staff to inspire. There are good people – great people – who work in Discovery with me.

I have no doubt that my park will be in good hands when I retire.

Thank you to the campers that I recognized from year to year at my programs –- I enjoyed our conversations.

Thank you to the park staff that supported Discovery’s projects.

Thank you to the Friends of Sandbanks that supported many of our endeavours.

And last but not least, thank you to the many, many VS/NHE/Discovery staff I have had the undeniable pleasure and privilege of working with.

May we meet again.

Yvette Bree has been integral to Sandbanks Provincial Park’s Discovery program and the park’s day-to-day operation. She has inspired countless young students and visitors to appreciate Ontario’s natural spaces.

Thank you, Yvette! You will be greatly missed.