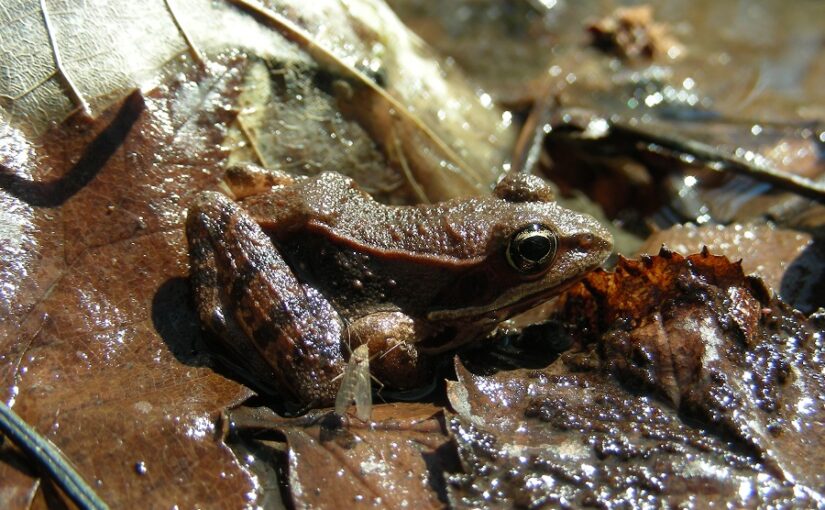 Those who love frogs will not be disappointed at Charleston Lake Provincial Park. Larger frogs, like Bullfrogs, Green Frogs, and Leopard Frogs, are easily seen or heard around ponds and shorelines, wetlands and meadows.

But it’s a shame that another common park frog goes largely unrecognized and underappreciated.

It probably goes unnoticed because of its small size and the fact that breeding males only call for a short period in early spring.  Their elusiveness is further escalated by the fact that they leave their breeding ponds immediately after the brief mating period, living out most of their lives on the forest floor in relative silence. In fact, they are rarely found in water.

This unassuming, land-loving frog is appropriately called the Wood Frog, spending much of its time in the woods.

The Wood Frog is distinctive looking, if you’re lucky enough to spot one, with brown or reddish-brown skin and a characteristic dark mask over its eyes.  Adults are about three to eight centimetres long. They are very common in northeastern North America, ranging farther north than any North American frog. They can even be found beyond the Arctic Circle — pretty astounding for a cold-blooded animal!

What it lacks in size and sound volume, it sure makes up in tenacity and ingenuity. Few animals are capable of the Wood Frog’s fabulous feats of survival, such as withstanding internal freezing, hypothermia, and diabetes-like conditions, and then seemingly coming back to life.

We think of this amazing amphibian as an unsung hero, and so we’d like to showcase the marvels of this “wonder frog.”

Let’s start in the early spring, when this frog is one of the first amphibians out of the starting blocks.

After spending the winter on land, hibernating under leaves on the forest floor, they head immediately to their preferred breeding pools in the forest with the first warm (5°C) spring rainfalls.

They may even begin breeding while there is still some snow on the ground and ice remaining along the edges of their breeding pools.

To hear a Wood Frog call (which sounds a little like a quacking duck), you need to listen closely in late March or early April. Wood Frogs are “explosive breeders,” competing in a reproductive race against time.  They breed in shallow temporary pools in the forest (free of fish predators) that will dry up in the summer. Therefore, they need to breed early to allow their eggs and then tadpoles to develop before their pools go dry.

As such, the mating period is very short.

These frogs migrate en masse, and the entire population in the area will travel by night, with most arriving on one particular night (although nearby pools may have slightly different timing).

Up to 4,000 individuals have been recorded coming to a single pool in a three-hour period.

Once in the breeding pools, many males begin calling (an extremely energy taxing activity in itself) and have wrestling matches between competitors, jostling for position to breed with females entering the ponds. This is a remarkable feat considering that the Wood Frogs haven’t eaten for about eight months, and still won’t feed until after the breeding period.

A single female can lay 500 to 3,000+ eggs. Remarkably, the females have the uncanny ability to avoid laying their eggs in pools that have fish (which could readily decimate the eggs and emergent tadpoles).

The adults only remain at the breeding pools for a few days (usually no longer than two weeks) before returning to the forest.

This may be the last time that many of the adults will be in water, as many will not survive to breed again the next spring.  They can travel 400 to 800 m (some more than a kilometre!) from their breeding pools, a significant distance for an animal less than 10 cm long that gets around by hopping.

In their race against time, the frog eggs develop rapidly, in as little as four days, or as long as weeks (the warmer the temperature, the faster the development).  The tadpoles grow quickly and transform into young frogs in six to 15 weeks.

The adults spend the rest of the spring and the summer on the forest floor searching for food while avoiding the many would-be predators. They feed on a range of invertebrates, such as ground beetles, crickets, bugs, caterpillars, earthworms, snails, and spiders.

Predators of adult Wood Frogs include larger frog species, snakes, herons, raccoons, skunks, and mink. When disturbed on land, they often jump for a few erratic leaps and then freeze, and seemingly disappear amongst the leaf litter and vegetation.

To most animals, freezing means certain death, but not to Wood Frogs.

Many insects build up cold-tolerance chemicals in advance, while some plants “harden” themselves for winter. Rather, they wait for ice to form on their skin. But, incredibly, within about five minutes of their skin starting to freeze, the frogs react by producing enormous amounts of glucose (a common sugar) in their blood and tissues. The glucose acts like a natural antifreeze, causing ice to form within the spaces between the frog’s cells, not within the cells (which would be fatal). Up to 65% of the total water in the frog’s body may freeze solid!

Wood Frogs will spend the winter on land, crouched on the forest floor with their head down, limbs tucked in tightly to their sides, often simply under fallen leaves or logs, and later covered by snow.

They don’t suffer hypothermia or frostbite.

While hibernating, they will not breathe, their heart will not beat, they will not digest food, nor will they have brain cell activity! A human found in this condition would be declared clinically dead.

However, in the spring the Wood Frogs remarkably thaw and “come back to life.” They show normal body responses within 24 hours of thawing (in a laboratory setting), with full recovery in several days.

The Wood Frog is nothing short of a biological marvel

They breed in early spring while there may still be snow and ice, and beat the race against time for their tadpoles to develop before their breeding pools go dry. In the winter they can freeze – certain death for most animals – and then “come back to life” the following spring.

This wonder frog challenges the limits of animal survival. Not bad for a small, unassuming frog!