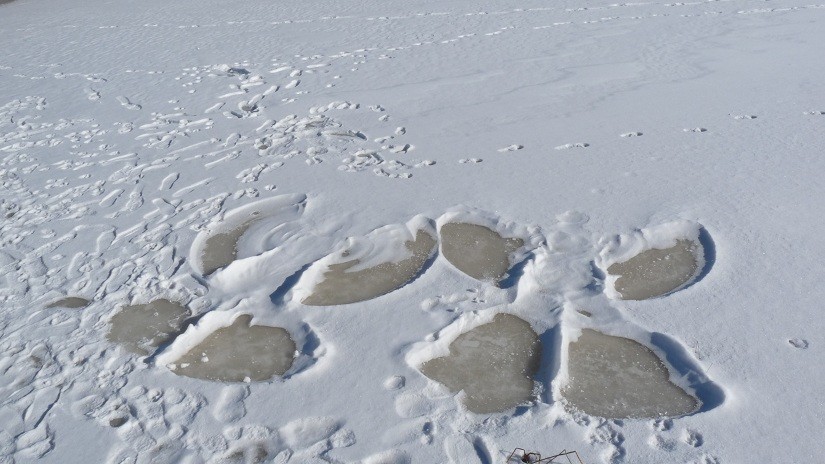 With the onset of winter, we often think of nature going into a slumber, but while she slows down, there is still lots going on outside. Winter provides a better opportunity to learn what the animals of our fields and forests are up to than do the warmer seasons.

I am, of course, talking about tracking, tracking in the snow.

Winter’s the best time to sharpen your wildlife detective skills!

While the best trackers out there can follow tracks at all times of the year, in all terrains, most of us need mud, sand or snow to hold tracks that we can easily see.  And snow is the best because it is everywhere!

Track down some unusual suspects

Tracks in the snow can tell you what kinds of animals are around.  Many are the familiar mammals, like squirrels and rabbits, but many tracks are of mammals that only come out at night or are very secretive.

And it’s not just about identification. Tracking allows you to see what the animals have been doing. We can learn what routes an animal takes, when it walks and when it runs. Sometimes I even know what it catches to eat, all by following tracks in the snow.

What are those winter critters up to?

Tracking allows me to get an estimate of how many deer are in the park, where they like to go down to the lake to drink at night, where they are sleeping, and how many young ones are in the herd.

I can see where small birds, juncos and sparrow probably, have been hopping over the snow visiting all the grass heads poking up above the surface and eating the seeds they find there.

…and sometimes you can see where he didn’t make it. The tracks ending suddenly in a depression fringed by the marks of wing tips. An owl, or perhaps a hawk found its dinner here.

What in the world was that? One year, I arrived in the park’s parking lot to see the weirdest tracks I’d ever seen. Smallish with the thumb stuck out at big angle. What in the world was that?

Luckily there are many good track books and websites, and I found that my new track was a Virginia opossum — a mammal previously unknown in the park!  Here was proof that this species was expanding its range northward into our area, though the last two severe winters may have knocked them back. (I have not seen any tracks this winter yet.)

The best time for tracking?

While it is pretty easy to see tracks in the snow, it still takes practice to identify the tracks you are seeing. Start by getting out after every light snowfall.

The best tracks are in a thin skim of snow (5-20 mm) over a hard base. New snow on a parking lot or over previously hard packed snow is ideal. You can see every detail and the tracks look just like the ones in the books.

Okay! I’ve picked up a trail! Now what?

Look at the basic shape of the print and ask:

These basic questions can be a big help. For instance, red squirrel and grey squirrel tracks look the same, but the grey is twice the size of the red’s tracks.

Next: look for the tracks’ patterns or gait

Many weasels hop, so the tracks come in pairs. Wild dogs, like coyote and fox, tend to put one foot in front of the other, so they leave a narrow, straight track through the snow. Domestic dogs walk with their feet more spread out and — if off-leash — rarely in a straight line.

Fast-hopping rabbits and hares land with their bigger hind feet in front, with the two front feet trailing, one behind the other. Squirrels are similar: big hind feet first and the two front paws landing behind, but they are side by side. (It can also help that the tracks end at a tree. Squirrels climb trees; rabbits don’t.)

Speaking of trees, don’t forget to look at the base of tree trunks for flakes of bark.  While not true tracks, these signs can indicate climbing mammals or maybe foraging woodpeckers above.

Figuring out tracks in deep fluffy snow is a lot trickier and not recommended for the beginner tracker. Prints are distorted and often snow collapses on top. You might be able to dig down and see the hoof marks of a deer at the bottom rather than the pad of a coyote but don’t be discouraged if you can’t figure it out – it’s hard!

Ready to practice your own snow sleuthing skills?

Test your tracking knowledge against our #snowsleuths snapshots. Can you name those tracks?

Birds and mammals are still out and about (looking for food or trying not to be food), and the best way to discover who’s out there is winter tracking.

And if you see any opossum’s tracks, let me know!