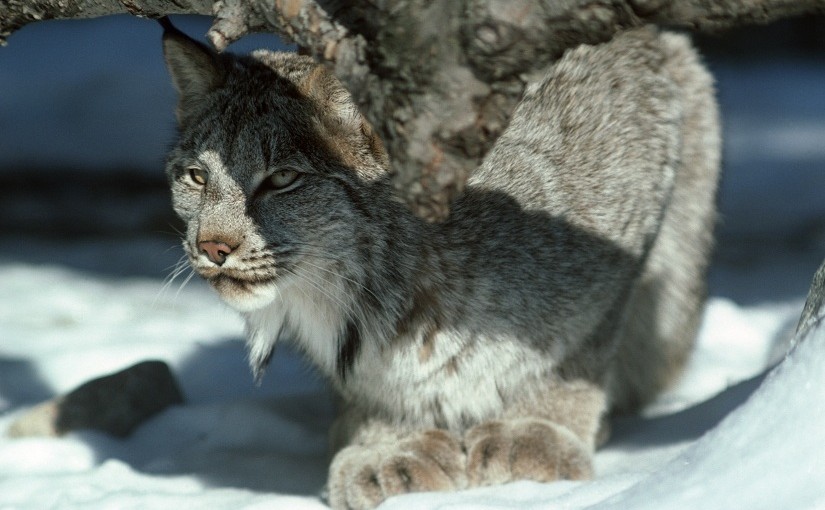 Today’s post comes from Christine Terwissen, a biologist intern from our Southeast zone.

Lynx can be thought of as the “king” of winter animals. Their thick fur allows them to remain active all winter.

Lynx can be found throughout Canada’s boreal forest, which in Ontario generally means north of Algonquin. However, not many people manage to spot them since lynx are notoriously wary of people.

The best way to tell if you have seen a lynx is their unique ear tufts (which are much longer than those of bobcats) and their stubby black-tipped tails. Lynx are a particularly elusive species, so the most common way of detecting lynx in winter is through their tracks.

The first way to identify a lynx track is by size. They’re usually around 7-8 cm wide. Canines (wolves and coyotes) also have tracks around this size, but can easily be differentiated using the figure below:

Looking for lynx tracks? Keep your eye out for tracks that:

Lynx are specially adapted to be able to catch their main prey: the snowshoe hare. Their particularly large furry feet, which act like snowshoes, allow them to run quickly over snow. However, snowshoe hares have developed their own defenses. They change colour from brown to white every fall to blend in with the snow and make it harder for lynx to spot them. This characteristic predator-prey cycle is one of the most studied examples as lynx populations can be determined from Hudson’s Bay Company fur trapping records all the way back to the 1800s.

This means that — depending where in the 10-year cycle you are — catching sight of a lynx may be a rare treat indeed!