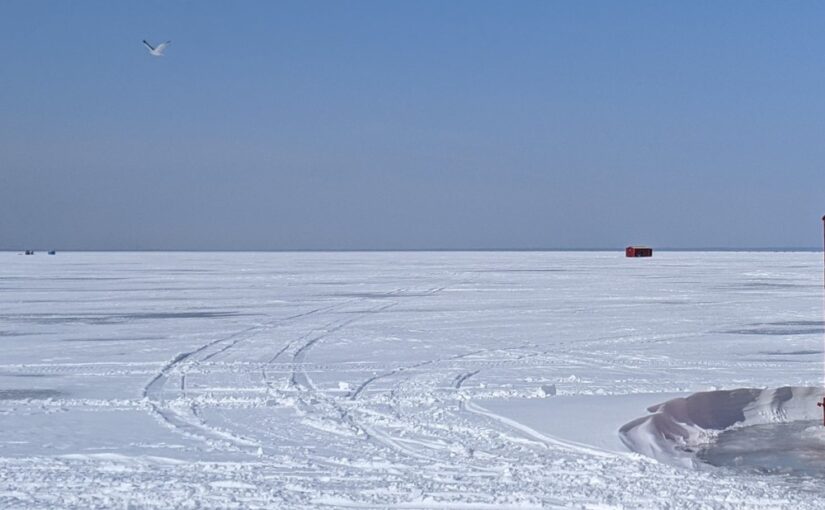 The sun is shining, glittering off the ice. It’s winter on Lake Simcoe.

From the shore, it appears the lake is ‘asleep’ for the winter months, with no movement to be seen. However, that’s just what’s on the surface. The reality below is quite different.

Winter for the aquatic species of Lake Simcoe is one of necessity and mystery. Let’s dive in.

A little about Lake Simcoe

Lake Simcoe is located 70 km north of Toronto, and is the fourth largest lake located entirely in Ontario. At the time of first European contact, the lake was named Ouentironk (oo-ent’-er-onk) by the Wyandot people, meaning beautiful water.

The beautiful waters of Lake Simcoe are home to over 50 species of fish. A variety of invertebrates and aquatic plants also rely on the complex lake ecosystem.

In the summer months, Lake Simcoe is bustling with cottagers, beachgoers, and boaters. As the temperature drops in the fall, the seasonal changes are felt above and below the lake’s surface.

Throughout the year, Lake Simcoe experiences different water temperatures and densities of water, depending on depth.

Cold water is denser than warm water, making it ‘sink’ to the bottom of the lake. Warm water stays at the surface.

As the seasons change, the air temperature lowers, which in turn lowers the surface (warmest) water temperature too. What happens to this water as it cools? In the autumn months, the lake experiences a phenomenon called the fall turnover. This is when the cooling water from the top sinks down low, and the wind stirs the lower water in the lake to the surface.

For a brief period, all the water is around the same temperature (about 4 degrees). Water temperature is linked to the amount of oxygen water can hold. The colder the water, the more oxygen can be dissolved.

Once the turnover is complete, the surface water will be the coldest and freeze. The water temperatures will range from 0 to 4 degrees beneath the ice.

The oxygen in this cold water will be all the oxygen available to lake life over the winter. After the fall turnover, the dissolved oxygen levels will dictate where different aquatic species will spend their winter.

The shallow parts of Lake Simcoe are where there is the least amount of oxygen. As a result, the animals that spend their winters here usually slow down to conserve oxygen and energy.

Painted turtles and snapping turtles will dig into the muddy bottom of the shallows and slow down their breathing and heart rates. This process is called brumation. By slowing down for the winter months, turtles rely more on the shelter of the lake’s bottom, than actively using oxygen.

On the other hand, cold-water species, such as Lake Trout, need access to deeper water. Lake Trout have started to naturally reproduce in Lake Simcoe over the past twenty years, and rely on the oxygen-rich environments in the lake depths.

In the winter they are usually found 25 to 37 m below the surface, where they will feed on aquatic invertebrates, crustaceans, and other fish.

One of the most common fish species in Lake Simcoe is the Yellow Perch. Yellow Perch feed on invertebrates and a variety of fish eggs and young.

Yellow Perch are primarily a shallow water fish, staying in the in the 2 to 9 m depth range at the start of the winter. As the winter progresses and dissolved oxygen gets used up, Yellow Perch will move to deeper, more oxygen-rich areas. These cold-water species require higher levels of dissolved oxygen than warm-water species, and struggle to make it through the winter when oxygen levels are low.

The dissolved oxygen levels of the lake are dictated not only by the temperature, but also by human activity.

Phosphorus is a naturally occurring element, and is essential in the lake. However, when phosphorus levels get too high, they can become a factor in depleted oxygen levels, affecting fish and other lifeforms.

Our habits can have positive impacts on these issues, such as reducing water usage, choosing fertilizers without phosphorus, and using phosphate-free soaps both at home and when visiting parks. Located on the south shore of Lake Simcoe, Sibbald Point Provincial Park is a popular access point for ice fishing.

The park remains open year-round for day use, and permits are required at all times.

When planning your visit, please book your daily vehicle permit in advance.

Follow all fishing regulations, and handle your bait responsibly.