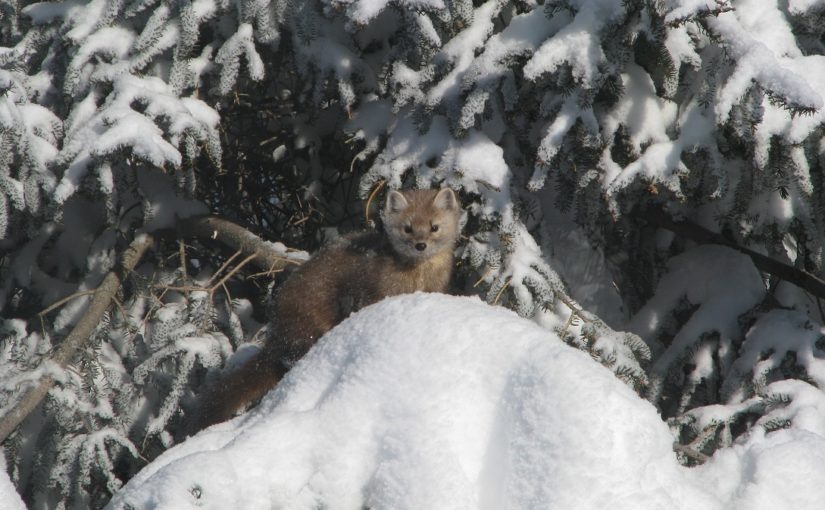 Canadians know that among the many things that make our country awesome, two things stand out: our vast expanses of beautiful, untouched wilderness…

…and our passion for hockey.

So why not both at the same time?

As hockey season grinds on, we did some scouting of our own. Here are the critters and creatures we’ve selected for the Ontario Parks All-Star Hockey Team! Strengths: Lives in the north, so ice is in his blood.

Weaknesses: He’s a reindeer with a different name.

Why he’s on the team: Everyone knows you need someone at centre that’s strong on their feet to make the important plays.

Caribou have very large feet that are well suited for scraping hardened snow and ice to get at food below, as well as for traction (perfect for those clutch face-offs!). The next time you see one at a winter event, check out how big their feet really are. Weaknesses: Nocturnal, so stays up too late on game day.

Why he’s on the team: Pine Martens are quick and agile, and can leap from pine to pine in the forest to evade predators, though they hunt mostly on the forest floor. They’re known for being particularly difficult to spot in the wild.

That means other teams won’t even be able to keep track of where he is on the ice. Strengths: She’s got a lighting-fast head to strike out at food, threats, and one-timers.

Weaknesses: The other team is probably going to catch her if she’s on a breakaway.

Why she’s on the team: Unlike most turtles, Snapping Turtles have a tiny lower shell. That means they can’t withdraw into their shells when threatened. Instead, when they’re on land, they have to stand their ground and snap at threats that get too close.

That’s the just sort of tenacity the Ontario Parks team needs. She doesn’t back down and isn’t afraid to let the other team know when they’re out of line. Strengths: Other players won’t want to throw a body check.

Weaknesses: Can’t give her teammates hugs after goals.

Why she’s on the team: Porcupines are the perfect prickly defence partner for any shutdown line.

They have over 30,000 quills, which are modified hairs. But contrary to the myth, they can’t throw their quills. Instead, they are lightly attached to the porcupine’s body, so that they easily detach when they meet another animal. They can lose hundreds in a single encounter – ouch! Strengths: She can figure out how to get into your cooler or the back of your net if you’re not careful.

Weaknesses: Sleeps through much of the hockey season.

Why she’s on the team: Female Black Bears weigh between 100 and 150 pounds on average; their male counterparts between 150-180. Female bears can double their size over the summer in preparation for hibernation, if there’s abundant food.

Ontario Parks needs that sort of big body on defence to block shots. Strengths: Will lock antlers with other moose for mating supremacy and battles in the crease.

Why he’s on the team: Moose are huge and can grow up to 5 to 6.5 feet tall from hoof to shoulder. The males’ enormous antlers add to their imposing figure, which can grow up to six feet wide, end to end.

Of course, this means snipers are going to have a tough time picking the top corners of the net.

Learn more about other celebs of the natural world here.