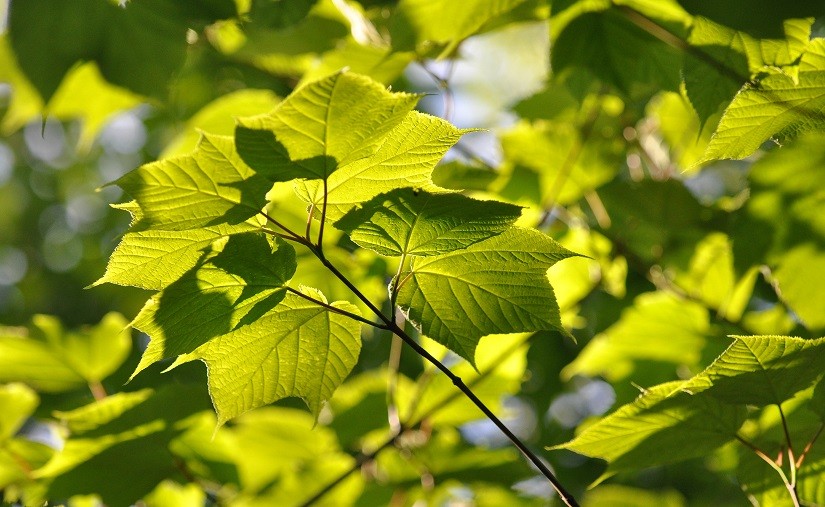 Spring invigorates us, renews us, and makes us optimistic. Leaves sprout, flowers bloom, and birds sing. Winter is gone (mostly), and we can look forward to warmer sunny days.

We get excited about spring because of colour too. Green leaves mean summer is just around the corner.

If we look a bit closer though, we’ll see that there’s more than just green in the forest…

Chlorophyll is the pigment that makes leaves green. It allows trees to convert sunlight, water and CO2 into food (and oxygen). In the depths of summer, almost all leaves are green. “Leaf” green.

In spring, there are lots of green leaves, of course, but not that dark “leaf” green, and there are many shades early in the growing season, and even leaves of other colours.

As buds leaf out, some have a dusty light green shade like large-toothed aspen. Some are lime green like white birch, while red oak trees have an orange-y tinge to their bright green leaves.

Red maples flower early, before the leaves appear, and the flowers are red. The seeds that appear, called keys, are also red. When the leaves do appear, they have a reddish tinge to them as well. Slowly, the chlorophyll becomes the dominant pigment, and their leaves are very green. In fall, though, the red maple begins to withdraw nutrients from its leaves, and the brilliant red pigment appears. Ontario’s brilliant fall colours occur because the trees are drawing out the nutrients from the leaves. The red, yellow and orange pigments were there all along, disguised by the green chlorophyll.

So why would spring leaves be anything but green?

Chlorophyll is a photoreceptor, and absorbs mostly blue and red wavelengths of sunlight. The green is not absorbed, and is reflected instead, which is why leaves are green. Chlorophyll must be constantly replaced in the leaves as it breaks down, so the many colours of spring leaves is due to different amounts of the green pigment in some trees new leaves.

…as soon as the temperature gets back up to the freezing point, some trees start making food

Poplar trees like trembling aspen have chlorophyll in their bark, giving the tree a greenish tinge. They can make a little food even before they leaf out.

Pine and fir trees keep their needles all year, so evergreens like black spruce can make tiny amounts of food even when the temperature’s below freezing. If they didn’t have all of those indentations, the leaves at the top would block too much light for the leaves below to survive.

A whole stand of poplars may have identical genetic information. You may see a stand over here that are all leafed out, while another stand over there have no leaves at all. The trees in leaf are taking advantage of the spring sunshine, while the trees without leaves are safe from a leaf-damaging frost. Once the trees leaf out, the plants on the ground are in shade, and must make do with much less light to make their seeds and maintain their leaves.

…a few forest plants aren’t green at all

Indian pipe is a plant that looks a bit like a fungi because it has no chlorophyll at all. It can’t make its own food without the green pigment, so it taps the roots of trees, and gets its nutrients that way. It’s a plant parasite.