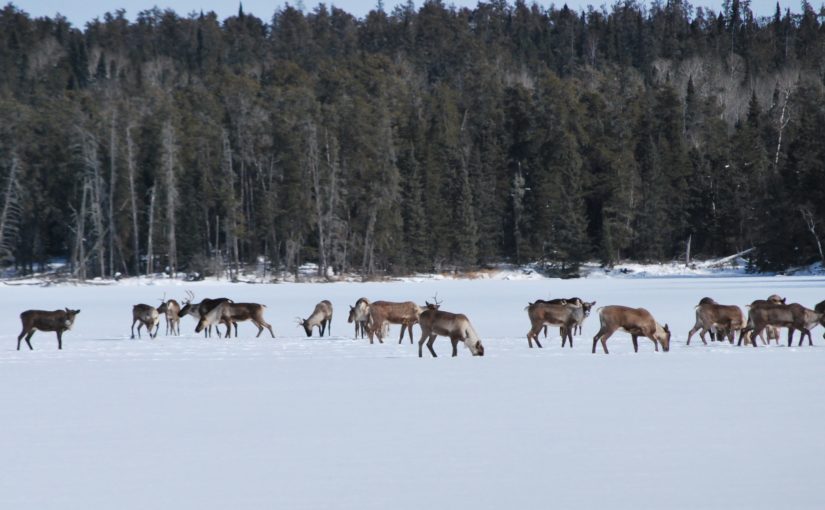 Peering out from among the trees, I am certain these curious animals watched us as we paddled by.

We know they exist, but they’re so seldom seen that they’re referred to as “the grey ghosts.”

Wabakimi Provincial Park is home to the elusive creature known as the Woodland Caribou, at the southernmost edge of their range.

As the biologist for Wabakimi, I consider myself very fortunate, spending my summers researching such majestic animals and paddling through this magical place defying description.

Getting into the backcountry usually requires a minimum eight-day canoe trip, flying or taking the train in, then paddling out to one of the few road access points. On most trips into the park, I’m lucky enough to see at least one caribou. However, I will share with you one of the most memorable moments I’ve had coming face to face with this creature.

A co-worker and I were out in the core of Wabakimi, walking back from a caribou habitat plot when we spotted a caribou bedded down in the moss ahead of us. We both froze in our tracks and hunkered down, making ourselves appear smaller.

If they can’t smell you then it’s usually movement they notice, however, this caribou was well aware we were present.

We watched the caribou get up and slowly make a wide, full circle around us so it could catch our scent. At one point, it actually walked up closer to us to get a better look before walking off.

They are as curious about us as we are about them, and will often come to check you out if they feel there is no threat. This chance encounter reaffirmed how important it is for us to ensure that caribou remain at this southern extent not only for us to experience, but as a barometer for a healthy ecosystem.

Did you know caribou and reindeer are actually one and the same? “Reindeer” is the name given to caribou in Scandinavia and Russia, but are the same species (Rangifer tarandus) wherever they are found in the world.

Caribou have scent glands at the base of their ankles, used when the animal is in danger. It will rear up on its hind legs to release a scent that alerts other caribou to the danger it’s facing. Caribou have large cloven hooves that support it when walking through deep snow or muskeg. These hooves also help them scoop and crater through up to one metre of snow to get at ground lichen.

Caribou belong to the deer family, and are the only members where both male and female grow antlers. Females shed theirs just after giving birth in May or June, and the males shed theirs after mating in November or December

Caribou depend heavily on lichen that grows on the ground during the winter and summer months. In the summer, they will supplement their diet with other herbaceous plants.

Lichen grows best in open Jack Pine or Black Spruce stands, and regenerates best after an intense forest fire. These fires are important in providing future caribou habitat, however, once lichen is disturbed, it can take a minimum of 40 years or more to recover.

During the winter, caribou can smell lichen under a metre of snow, and will crater down to the ground to eat lichen.

They will also eat the Black Tree Lichen (old man’s beard) that grows on Black Spruce trees in wetlands, where the trees are smaller and lichen is much more abundant and easier to reach.

During the summer months, caribou disperse to islands and wetlands to calve. Normally one calf is born, but occasionally the mother will give birth to two. This usually takes place during May and June, although they have been known to remain on the islands once their calf is born until September. One theory is they go to these islands to avoid predators, primarily wolves and Black Bears.

Wabakimi: a place of protection

These shy and highly secretive animals need large pine/spruce forests free of roads and other disturbances to thrive. It is estimated that an average herd of Woodland Caribou require 900,000 ha of undisturbed wilderness, which is about the size of Wabakimi Provincial Park (850,000 ha).

One of the main reasons Wabakimi was formed was to protect the caribou and its habitat from potential development. This size was a minimum requirement to sustain caribou.

“Caribou are barometers for healthy forests. If caribou aren’t doing well, that means our forests are in trouble and we need healthy forests to help sequester carbon, regulate climate, and mitigate against floods, to name a few of the ecological services that they provide.” — David Suzuki

A species at risk

The Woodland Caribou is an iconic Canadian species that was once found in 80% of the country.

Today, their numbers are dropping dramatically. At least half of the caribou’s range has been lost due to activities that disturb and fragment their forest habitat, such as road building.

These changes in the boreal forest make caribou an easy target for their natural predators: wolves.

At present, Boreal Woodland Caribou are listed as “threatened” under the federal Species at Risk Act, meaning they are threatened with extinction. Fortunately, caribou are still found at the southern edge of their current range within Wabakimi Provincial Park.

If you plan a canoe trip to Wabakimi, you might be lucky enough to catch a glimpse of one while paddling through the park, or at least know they’re watching you.

Our research involves surveying islands for caribou calf signs to protect and designate certain areas as nurseries. Every winter, a transect is flown through the park to determine where caribou are, and if they are using the same areas as previous years. Camera monitors are set up to determine the extent of travel and caribou use along certain canoe routes or portages that could potentially conflict with recreational use. Habitat and fire regeneration are studied to ensure that sufficient current and future habitat is available

How you can help