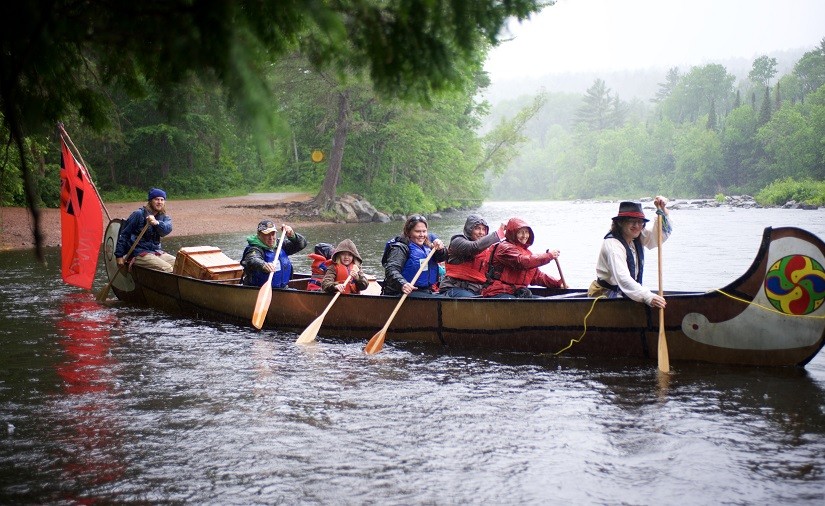 We are excited to bring back the Voyageur Adventure Tour to Samuel de Champlain Provincial Park this summer!

Experience the life of a voyageur at the height of the fur trade by paddling a voyageur canoe on the beautiful Mattawa River.

Our knowledgeable guides will help you discover part of our Canadian heritage.

The history of the Mattawa River The Mattawa River has been an important travel route for thousands of years. Archaeological evidence shows Indigenous settlements above Lake Nipissing and the Mattawa River dating back 9,600 years.

At this time, the Mattawa River flowed more than 100 m higher than today, swollen with the glacial melt water of the last ice age.

For the Anishinabek and, later, Europeans like Samuel de Champlain, the Mattawa River facilitated travel and trade by canoe. Without the luxury of modern roads and railways, canoeing was the only option for navigating the rugged geography of the Canadian Shield.

The Mattawa River is infamous for its challenging, but scenic portages. Despite this, the ingenious birch bark canoes of the Anishinabek grew into enormous 11m (36’) freighter canoes to satisfy the European demand for Canadian furs.

Voyageurs paddled and carried these 600 lb canoes across the Mattawa River, carrying thousands of pounds of trade goods and furs each season.

The term Voyageur comes from the French language directly translating to “travellers.”

Originally, this word was seen as an umbrella term for all early explorers, trappers, and traders that navigated the early Canadian wilderness.

Over time, being a Voyageur specifically meant the men employed by trade companies such as the Hudson’s Bay Company, and the North West Company.

These true Voyageurs were licensed through the Congé system to transport valuable goods such as furs, blankets, and tobacco through the interior of Canada in exchange for items such as iron axes, flintlock muskets, and brass tools.

These men would transport their valuable cargo along rivers, and across lakes via birchbark canoes. Voyagers were indispensable to the development of Canada’s fur trade, and the growth of the nation we live in today.

This summer at Samuel de Champlain Provincial Park, don voyageur sashes, a PFD, and paddle back in time!

Tours are offered on Wednesdays, Saturdays, and Sundays throughout July and August.

Sign up at the Mattawa River Visitor Centre. Tours must be booked by 4:00 pm the day before. In celebration of the heritage of Samuel de Champlain Provincial Park, we bring to you, our rendition of a Voyageur Rendezvous. There will be traditional Indigenous games, music and dancing, bannock, and more!

Get a taste of what it was like to be a voyageur by participating in pack carrying, and fun trading games.

What is a rendezvous?

As a break from their travels, voyageurs organized annual, or semi-annual meetings called “Voyageur Rendezvous” or “Grand Portage.” These large gatherings brought together Indigenous People, voyageurs, traders, trappers, and families.

The most well-known Rendezvous was The Great Rendezvous, which happened at Fort Williams between 1803-1821.

For voyageurs of the North West Company, Fort Williams on Lake Superior (where Thunder Bay is now located), was a midway point for men paddling from the west with their precious furs meeting men travelling from the east with other valuable trade goods.

This was a great place to exchange goods before continuing home for the end of the season. To celebrate the success of these trades, the voyageurs, Indigenous People, and community members met at The Great Rendezvous.

During the day, furs and trade good where sorted and exchanged, boats were repaired, meals were cooked and prepared for the upcoming travel home.

At night, it was time to put work aside and partake in the celebration. There was a feast, dancing and bagpipes, fiddles, and fifes. Songs were sung and stories were told about the journeys of the voyageurs.

These rendezvous happened in several locations, including the Mattawa River, which is home to Samuel de Champlain Provincial Park.