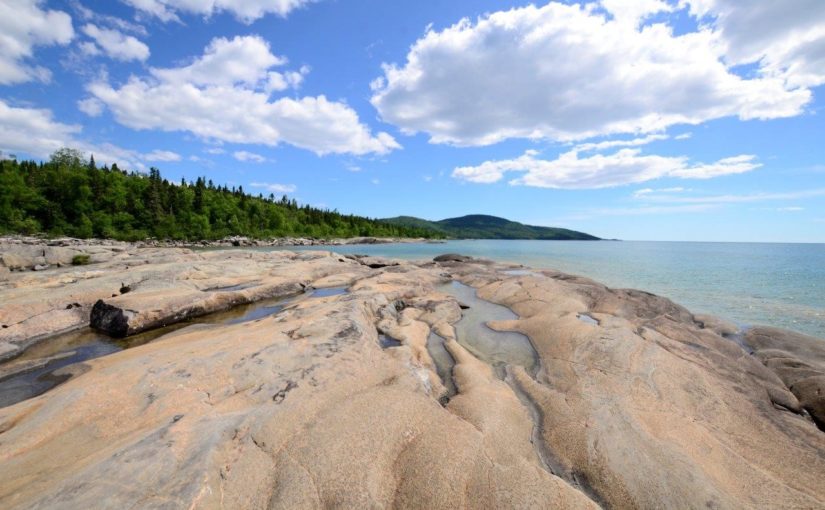 Neys Provincial Park is a special place. It has so many qualities that stand out when compared to other parks.

One of these qualities is the park’s Under the Volcano Trail. This stunning trail is entirely along the coast of Lake Superior.

This trail has some interesting features waiting to be discovered. Let’s take a look at what makes this trail special.

To start, the name says it all. This trail takes you along the route of what was once an active volcano where the coast of Lake Superior is now!

Under the Volcano’s geology

The rocks exposed along this hiking trail hold billions of years’ worth of Earth’s history. Approximately 2.6 billion years ago, in the early Precambrian (or Archean) era, the north shore of Lake Superior held one of the earliest continental rock formations on earth, which now forms the core of the Canadian Shield.

A little more than one billion years ago, these Archean rocks began to break apart during a geological event called the Midcontinent Rift.

In the vicinity of Neys, magma started to push up through the cracks and holes that formed in the earth’s crust and began to cause swelling at the surface of the ground. As the magma pushed further up, it eventually accumulated in a large magma chamber near the Earth’s surface that fed an active volcano that has long since been eroded away.

From volcano to trail

A few million years after the volcanic eruptions ended, the magma that remained under the volcano cooled slowly to form the coarse-grained igneous rocks that are found along the trail and dominate the landscape of the park. Although most of the lava flows were now gone, portions of the volcano walls collapsed into the magma chamber. This preserved some large blocks (or xenoliths) of volcanic rocks that can still be seen in the area.

For the last billion years the landscape has experienced many changes due to erosion.

The most recent geological event occurred when the area was frozen over by the glaciers that covered North America approximately 10,000 years ago. As these glaciers receded, they exposed the ancient magma chamber and left striations and chatter marks as evidence of their passage across the rocks.

Chatter marks on rocks look like crescent or wedge-shaped scratches caused by the rock being chipped away. The crescents are usually pointed in the direction that the glacier was moving. Glacial striations, like chatter marks, are from glaciers moving across the rock surface. These marks differ from chatter marks as they look like long parallel gouges in the rock often in multiple lines. What does this trail offer?

Under the Volcano Trail not only holds many cool rock formations and history, but it also holds life. During your hike, look out for different types of plants that can grow in these difficult locations, as well as critters that have adapted to the landscape!

Keep in mind that while hiking the trail it is important to conserve the area and take only pictures, leaving the natural features and wildlife as is! Before you head out pick up a trail brochure at the trailhead’s log-in box which will help point out the different plant and animal species as well as glacier markings along the way.

Logging remnants of the past

At the very beginning of the hike you’ll spot remnants of historic logging boats. From 1941-1946 there was a WWII Prisoner of War Camp at Neys which housed approximately 500 prisoners. During their stay, they were employed by the Pigeon River Timber Company and logged the surrounding area.

The boats were used to transport prisoners up and down the shore and Little Pic River to the work sites. Be careful around these as they are an important piece of history in the park.

Arctic-alpine disjuncts are plants that are mostly found further north than Neys. However, due to the Lake Superior’s cold, windy, harsh conditions and the cooler micro climate that it creates, these plants can thrive here as well. This includes the dainty Bird’s-eye Primrose, Common Butterwort, and Alpine Blueberry (Bog Bilberry).

Look out for carnivorous plants

You will also find plants that rely on insects as their food source. A couple to keep an eye out for include the Common Butterwort and Round-leaved Sundew.

The Common Butterwort has sticky leaves and curls up around insects that land on them, digesting their bodies and unrolling to dispose of their exoskeleton. While the Sundew lures insects in and then traps them in their sticky sap.

A splash of vibrant colour to the landscape

The bright orange flowers called Wood Lillies are hard to miss when hiking the coast and can be seen along the trail. Watch for them during mid-July, as they will be blooming at this time.

On the trail, look into the pools of water between the rock cervices and you might spot tadpoles, frogs, and even salamander larvae. Listen to the call of the Boreal Chorus frog! Their call sounds like running your fingernail down a plastic comb.

Tips for a safe hike The Under the Volcano Trail is a 2.5 km linear (5 km round trip) hike along the coastal line of Lake Superior.

We recommend wearing good, solid footwear as rocks may be slippery and rugged. Avoid hiking this trail in wet weather or when large waves are crashing onto the shoreline.

Be sure to bring snacks and water to keep yourself hydrated and with lots of energy. Also, it’s always important to tell someone where you are headed, when you plan to return, and who you will be hiking with.

Lastly, have fun and enjoy nature!

Come visit Neys Provincial Park to explore the Under the Volcano Trail and discover the park’s history!