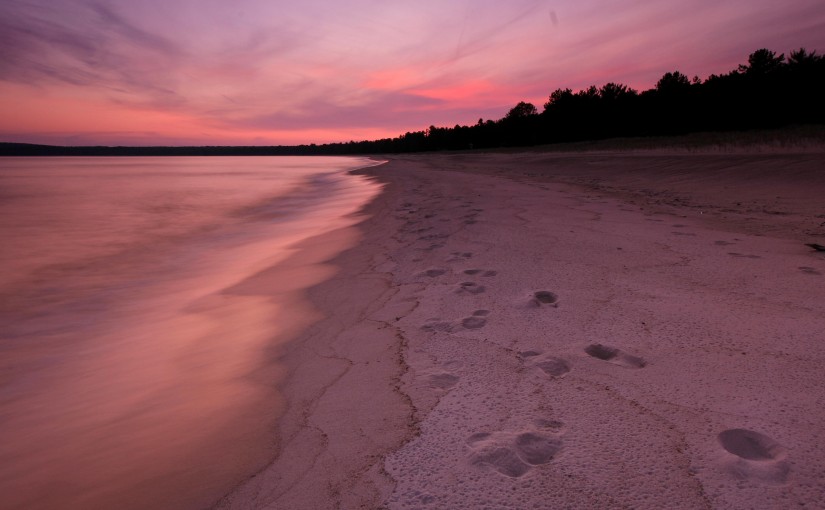 Let us introduce you to this stunning body of water with a park that showcases how great this lake is: Pancake Bay Provincial Park!

If you’re travelling from the east or south, Pancake Bay is the first provincial park with camping you’ll come across on Superior.

Located less than an hour north of Sault Ste. Marie, this park is perfect to start or cap off your Lake Superior adventures.

In the 1700s and 1800s sturdy French-Canadian voyageurs paddled huge 10 metre-long birchbark canoes across the Great Lakes from Montréal and back, carrying trade goods and furs.

This was the era of the Canadian Fur Trade. Legend has it that the voyageurs named this beautiful curving stretch of sand beach “Pancake Bay” as it was their last stop before reaching Sault Ste. Marie (where they would resupply) to have pancakes in the morning for breakfast.

While mostly legend, there is some truth to the story — they rarely had luxuries like flour with them, but did on at least one occasion.

The long sandy beach here was a perfect place for the voyageurs to camp — they needed a shallow place to unload their three tons of cargo from birchbark canoes before pulling them up on the beach.

Today, people are still drawn to the beach, and some likely have pancakes now and then, but these adventurers are campers and day trippers.

When it comes to its size, Lake Superior lives up to the name. Did you know that the water from all four of the other Great Lakes could easily fit in Lake Superior? Lake Superior seems more like an inland sea than a lake!

Lake Superior is so big, over 300 kilometers end-to-end, that when you look west across its waters from the shore, you can actually see the curvature of the earth!

At sunset, the sun slowly sinks into the waters of the lake for a sunset that can’t be beat. So where can you catch these views?

As you drive north along Highway 17, Pancake Bay and the stretch of road just to the north of the park is the first place you see the open lake.

There are many ways to experience Lake Superior. Try taking a drive north along Highway 17 for amazing views — the drive along eastern Lake Superior has been considered one of the best scenic routes in eastern Canada! Hike the Edmund Fitzgerald Lookout Trail in the park for panoramic views or one of the many hiking trails in Lake Superior Provincial Park an hour north, but more about trails later — it’s time to hit the beach!

On a sunny day, the turquoise waters make it look almost tropical! Lake Superior’s waters can be brisk, but the shallows of Pancake Bay are warmer, and Batchawana Bay (a day use provincial park 10 km from Pancake Bay) is even more sheltered and warmer for swimming.

At 3.5 km (over a mile and a half), there’s lots of room for beach-goers to spread out and have their own space. A section of the park’s beach is even designated as a leash-free pet beach! For many years Lake Superior Magazine’s “readers poll” named Pancake Bay one of the best beaches on both sides of the US-Canada border!

And to add to those accolades, Sault Tourism named Pancake Bay the best of the best as its top beach in Ontario!

High on a rocky hill above Pancake Bay, the park’s Edmund Fitzgerald Trail takes you to an awe-inspiring lookout.

The trail and the lookout are named for the Edmund Fitzgerald, one of the largest Great Lakes freighters ever at over (700’). Nicknamed “Big Fitz”, it sank in a terrible November storm while carrying a load of iron ore from the west end of Lake Superior, south to Lake Erie.

Climb the stairs to the two lookout platforms and learn about volcanoes, ferns, and how Lake Superior moderates the climate for the park’s forest.

Once you’re on top at the first lookout, you’ll see how big Superior really is — Whitefish Point in Michigan is visible in the distance, but beyond that is just a huge expanse of blue water. An interpretive panel tells the story of the Fitzgerald and many more ships and boats that have been claimed by the waters of the lake.

At the second lookout, Pancake Bay and its beach lie below, making a long, sandy curve in the distance. This is a great spot for outstanding fall colour viewing in late September and October, with a wide panorama taking in the Algoma Hills, Batchawana Bay, and Lake Superior’s Whitefish Bay, extending beyond to the horizon.

“The Soo” (as it is affectionately nicknamed) calls itself “Ontario’s best adventure town.”

When the city attractions are combined with the scenic landscapes of Algoma’s Lake Superior Coast, you’re in a world-class tourism region.

Check out these must-see tourism opportunities: Along the Lake Superior Coast

Around half of Pancake Bay’s 313 campsites offer electrical hookups. There are a variety of sites to accommodate a range of trailer sizes, as well as five reservable group camping sites. Three comfort stations with flush toilets and hot showers are located centrally in the park.

Their camp cabin offers comfort and coziness with all the amenities you need to have a relaxing getaway. Pancake Bay’s beach is just steps away from the beach. Watch the sunset on their accessible deck with transparent front railings.