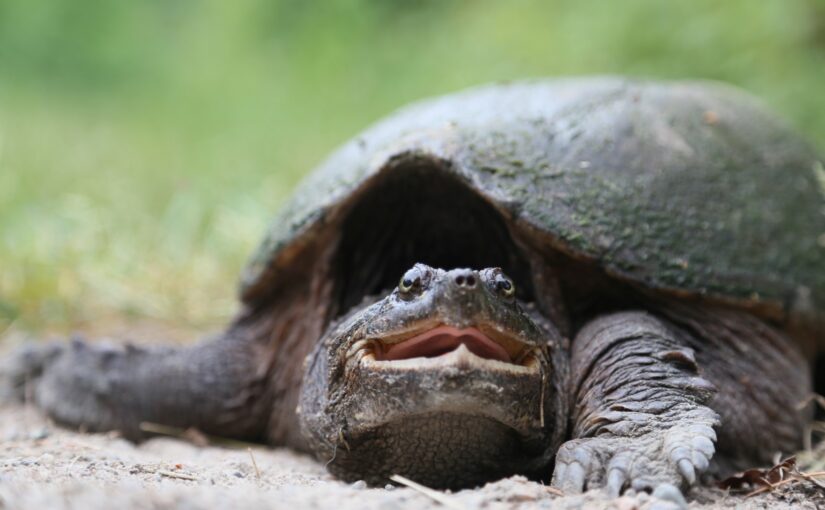 When I first started working at Grundy Lake, I was talking turtles with our park superintendent when someone asked, “Why do you care so much about turtles here?”

The answer is simple: while the park boasts a healthy turtle population and quality habitat, other areas are not so lucky.

This is only the beginning of why we should all care about turtles.

Our story begins more than 10,000 years ago, when the Georgian Bay/French River region was sculpted by thick glacial ice sheets and meltwater.

Ice smoothed the landscape, and in some places “sand-blasted” it with silty water beneath the ice, leaving depressions in the bedrock. The hollows filled with meltwater from the receding glacier, creating the wetlands and inland lakes we see today.

This gave Grundy Lake a collection of habitats that many species call home — including turtles!

Did you know turtles are the only animal with a backbone AND a boney shell? The top shell is essentially the turtle’s rib cage on the outside! Turtles are long-lived like us, living well over 80 years old.

These ancient reptiles have been on earth for 200 million years. Once living  alongside the dinosaurs, their ability to adapt allowed them to survive the events that wiped out other species.

Turtles have adapted to and survived whatever nature has thrown at them since.

How turtles contribute to the environment

Turtles as a group can be herbivores (plant-eating), carnivores (meat-eating), or omnivores (both plants and animals). Turtles are both predator and prey species, occupying different levels in the food chain. They keep the population of species below them in the food web in check, while also providing a meal for predator species above them.

For example, turtle eggs are an important food source for animals like racoons and skunks. In some years nest predation may be 100%, but this is part of a natural cycle.

A female turtle will lay hundreds of eggs over her lifetime. Only a few of those offspring need to survive to adulthood to maintain the population.

Turtle eggshells and undeveloped eggs also contribute nutrients to the soils in which they were laid, benefiting other plants and animals.

Turtles are 20-40% bone. After a life well-lived, they contribute important nutrients such as calcium and phosphorus back to the environment.

Snapping Turtles are great scavengers. They keep lakes and wetlands clean by “vacuuming up” the dead fish and animals that would otherwise be left to rot.

Finally, turtles are fantastic aiders in seed germination and dispersal. Especially Blanding’s Turtles, which travel great distances as they move from wetland to wetland.

In short, turtles have a key role in maintaining ecosystem balance.

Turtles love the Georgian Bay/French River area because it is less developed than other parts of Ontario. This means they can avoid their mortal enemies: roads and cars.

Development forces turtles to survive in a rapidly changing and increasingly dangerous world. They are resilient creatures, chugging on through the obstacles they encounter.

The road can be an enemy to all wildlife, but for the turtle it is a formidable foe like no other. Turtles cross roads every year, whether to explore surrounding habitat, or so female turtles can lay their eggs.  A female turtle begins nesting between the ages of 10 and 20 years.

She can nest every year for decades, often returning to the same location. That means many, many road crossings. Her instinct to return to the same location is so strong that when new roads emerge where there weren’t any before, her turtle senses still tell her she must get to the other side. The problem is she will cross so slowly that, especially in the busiest places, she is at the mercy of passing vehicles. There is no backing down from this quest to make it to the other side — and turtles are not going to look both ways before crossing, whether it’s a gravel road in the countryside, or Highway 400.

A turtle’s instinct to move all too often means an early end to the turtle long before it has been replaced in the population by a surviving hatchling. Alas, road mortality and habitat loss are the greatest contributors to the demise of turtles.

Females need to survive for the sake of their species — and this ultimate survivor is losing the battle.

So what is the big deal about the loss of a few turtles?

What would happen if we took turtles out of the ecosystem equation? I hate to be the bearer of bad news, but it would be disastrous. Like most reptiles, the presence of turtles is inherently linked to the health of an ecosystem.

They are what we call an indicator or keystone species. The more indicator species present, the healthier the ecosystem condition.

Turtles are also an umbrella species. This means if we protect turtles and their habitat, the habitat of hundreds of other species who live in the same ecological community is also protected.

Turtles are often overlooked as important members of their community, and their value as a species is not fully understood. As the number of turtles declines slowly over time, the lost ecosystem functions are not immediately noticed.

Here at Grundy Lake, we understand the importance of turtles. Since 2014, park staff have been monitoring turtles and turtle mortality in the park. We also protect nests to give turtle hatchlings a fighting chance at survival.

The program began when a nesting Blanding’s Turtle was hit by a vehicle on a park road.

Our goal in provincial parks is clear: maintain ecological integrity, or the health of the ecosystem. Turtles are a big part of that.

We decided to make protecting turtles our mission. Since then, staff and volunteers have documented over 500 turtle encounters on park roads.

Growth over the years

The Grundy Lake Turtle Monitoring Project has provided insight into how and when the park’s turtles travel on roads and through the campgrounds, particularly for nesting Blanding’s Turtles. Our goal is also to educate visitors on the importance of turtles. That’s why we expanded the program to give park visitors the opportunity to contribute to monitoring surveys by reporting their turtle sightings.

Park visitors are everywhere, and a couple hundred sets of eyes are better than one. You wouldn’t believe the difference it makes, and we really appreciate it!

Where oh where have the turtles gone?

Camper sightings were more important than ever during this past year.

This year our park’s opening date was delayed, and I started as the lone park naturalist. I was looking for turtles, but I wasn’t finding any! I had to wonder, was it me? If only I was The Flash, then maybe I would find some turtles!

I continued to ask myself: where have all the turtles gone? What changed? Has this weird weather thrown off their groove?

One week in late July, some campers called the park office to report baby turtles on their site.

After investigating, I had a lightbulb moment. The campers reported hatchling turtles in an area that generally didn’t have many nesting turtles. Even more peculiar, the nest had hatched about a month early.

This phone call made me realize how much the park depends on camper involvement in the program (community science, as they call it).

By myself, I can only find a turtle or two in a day. With the help of campers, I can spot so many more!

By reporting turtle sightings, campers learn why turtles need a helping hand, get to contribute to our understanding of these ancient animals, and increase the likelihood of hatchling survival.

As I see it, it’s a win-win-win situation. You might think it’s just one call, but it can help give turtles the fighting chance they deserve.

They have survived the test of time better than most animals out there. Let’s keep it that way! Injured turtles found outside the park can be reported to the Ontario Turtle Conservation Centre (OTCC) at (705) 741-5000.

Even a severely injured turtle has a chance at survival if it can make it to care fast enough.

Not in the park? You can still help!

There are still great ways to help our work to protect turtles, wherever you are in the world.

Check out the Turtle Protection Collection in our online store.
Proceeds from these sales directly support turtle protection, research, and education in Ontario Provincial Parks.

Donate to the Turtle Protection Project.
Your donation will be used to fund turtle research and protection projects like habitat restoration and nest preservation.

Many projects are already underway around the province!