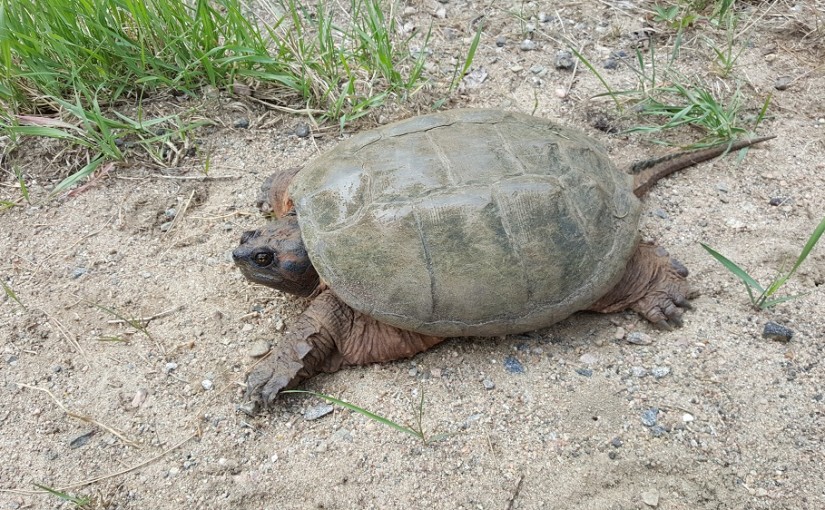 Earlier this month, a crew of seven park staff – rangers, maintenance workers, administration staff and biologists – spent the entire day installing turtle fencing along the side of the busy Highway 60 in Algonquin. This would be the first of three days of work over the next week, with up to 11 staff helping every day, to erect over 6000 feet of fencing.

Wetlands that are right beside the road are one of the most vital places to manage for turtles, especially throughout nesting season

Turtles are very active on the move between wetlands, and are often attracted to adjacent roadside ditches since they present the perfect combination of gravel and sand for laying eggs. Plus, these wetlands are naturally important habitat for turtles: an interface between land and water. Algonquin biologists have previously determined which wetland-road interfaces are important to manage along Highway 60, and I was the biologist this year in charge of installing fencing to decrease the risk of road mortality in turtles.

And just six days after installation, I got proof that it worked

Leaving work, I spotted a common snapping turtle sitting on the other side of the fence. I pulled over to take a closer look. There were tracks alongside the fencing where it had tried to find a way across the road, and the fence prevented it from getting injured or killed on its way there.

This turtle will likely live longer than you or me Undisturbed and protected from human activity, turtles can live to be more than twice the age of humans. In Algonquin Provincial Park, we’ve aged common snapping turtle at well over 100 years old!

And unlike humans, turtles get stronger as they get older. Protecting adult turtles from road mortality is critical as they do not reach reproductive age until 12-20 years old, and lay up to 100 eggs each year. This means that losing one adult turtle is more like losing hundreds of turtles.

As we continue to manage our parks and protected spaces, it’s important to have the end goal in mind: ecological integrity

This means not only managing and protecting species and ecosystems, but also letting nature thrive for nature’s sake.