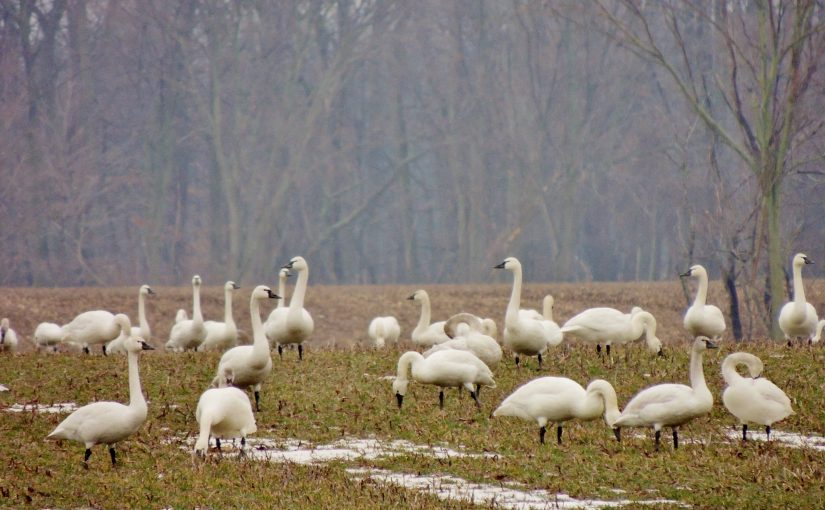 This installment of our 2017 blog series IBAs in provincial parks — brought to you by Ontario IBA Coordinator Amanda Bichel of Bird Studies Canada —focuses on the spring migrations at two of our southwestern parks.

On my recent trip to Rondeau Provincial Park / IBA for the Wings of Spring festival and the Port Franks Forested Dunes IBA (close to Pinery Provincial Park), one thing was clear…

Swans’ beautiful migration “songs” sound like a jolly party in the distance, while their arrival signifies early signs of spring for many.

People happily swap stories about the swans’ annual return, and share their favourite place to view them. Swans mate for life, living up to the symbol of romance we have bestowed them. They partner up at two to three years old, feeding and roosting together throughout the year.

In southwestern Ontario, significant numbers of Tundra Swans depend on six IBAs. Two of these overlap with provincial parks (plus one adjacent), giving protection to valuable habitat for swans. Tundra Swans use these areas as a migration stopover. They gather into flocks and replenish important fat reserves during their long journey from wintering grounds on the east coast of the United States to breeding grounds in the arctic tundra.

In 2013, southwestern Ontario IBAs hosted at least 9.5% of the global population or 15% of the North American population of Tundra Swans during spring migration (wow!). This is only on peaks days, so the seasonal tally of swans passing through would be a much higher percentage of the population. In March, the prime activity in the two parks is swan viewing, but just around the corner in May, spring migration of songbirds takes over.

In both Rondeau and the Pinery Provincial Parks, there is significant habitat for migrating and breeding songbirds. Rondeau remains a reliable location to observe the federally endangered Prothonotary Warbler.

Pinery Provincial Park also has habitat for species-at-risk like the Acadian Flycatcher and Red-headed Woodpecker, and has had up to 18 species of wood warblers breeding in the park. So if you’re looking for good spring birding opportunities, these IBAs/provincial parks have you covered with their array of trails and diversity of birds.

Rondeau and Pinery both host spring birding festivals — why not flutter over? Note: 2021 events are cancelled.