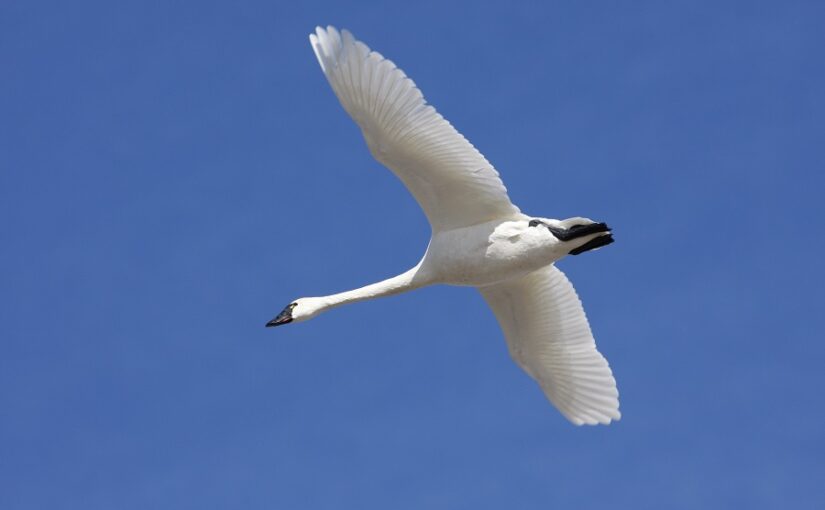 You close your eyes and take in the peace of nature all around you. All of the sudden, a loud yodel interrupts the quiet! That unbelievable sound is actually thousands of birds yodeling en masse as they fly over the park in search of their next feeding ground.

This unforgettable experience is courtesy of the Tundra Swan.

If you visit Pinery during March, you might just see and hear up to 60,000 Tundra Swans passing through on their way to their Arctic breeding ground.

Starting from their southern winter home in Chesapeake Bay and moving north, the swans are in a race against time to reach their final breeding ground at Hudson Bay.

But don’t wait—the swans will likely be gone by the last week of March or first week of April.  If there’s too much snow, they may overfly Pinery altogether or stop in smaller numbers.

According to National Heritage Education Leader Alistair Mackenzie, the Tundra Swan’s journey is a fascinating one.

The swans are following the same route that glaciers took when they retreated north after the last ice age. For thousands of years, the Tundra Swans have been nesting and breeding in Arctic-like conditions. Now, the same conditions are up at Hudson Bay. however, thousands of years ago it would’ve been in these parts of southern Ontario. As the ice retreated, the swans followed northward.

Now their migratory routes essentially follow that retreat. They’ll fly as far north as possible and find staging areas like Pinery. There, they’ll bed down for a period of hours to days and replenish their resources. They’ll rest, feed, and get prepared for the next leg of the journey

“It’s a marvelous natural spectacle to see this. It makes me humble when you think about how easy our lives are,” said Alistair. The return of the Tundra Swans is an experience the whole family can enjoy.

The little ones will love hearing how the swans travel as a family, bringing their babies from last year with them on this primal journey. Make a game of it by asking your kids to spot the babies by their grayish necks. See if your kids can guess what the swans are feeding on, too! The answer? Agricultural residue such as soybeans, corn, mollusks, and snails.

Make sure you dress warmly for your swan-gazing trip, and bring binoculars just in case. Park staff will be available at the Visitor Centre on weekends, and over March Break.

Tundra swans are just one of the cool things at Pinery.  Want to see more?