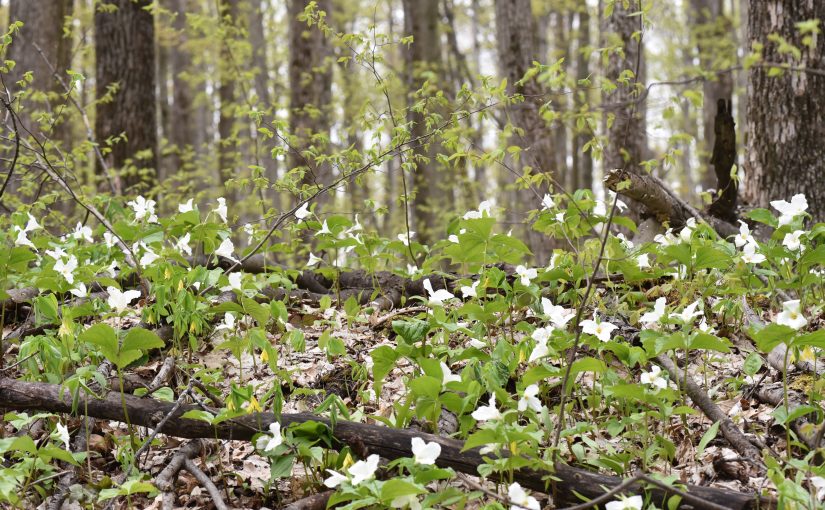 Spring is probably my favourite season as it brings new life to our parks in the form of migrating birds and emerging spring ephemerals, giving our forests their long-awaited pops of vibrant colours and contrast.

Most people know of the White Trillium — also referred to as Wake Robin or Large-leaved Trillium — as Ontario’s provincial flower. This is the flower featured on many of our provincial documents, from health cards to driver’s licenses.

Here are the top five fun facts about this iconic Ontario species:

1. Three is the magic number with trilliums They have three broad leaves, three small green sepals, three petals, and a three-sectioned seedpod. Even their genus name, trillium, refers to this phenomenon.

This dispersal method is known as Myrmecochory (try saying that three times fast!).

Ants are attracted to the protein-rich elaiosome on the seeds of trilliums, which they eat after carrying the entire seed back to their nests. The actual seeds are not harmed during this process, and are later discarded to grow a new plant.

3. The White Trillium is a favourite food of White-tailed Deer

In fact, many of our provincial parks use annual trillium surveys to understand the population of White-tailed Deer and their effect on the biodiversity of our forest’s understory.

4. If you pick a trillium, the plant may not have enough energy to survive throughout the winter

As a spring ephemeral, trilliums have a few short weeks in the spring to collect as much sunlight and nutrients as possible to be able to survive for the rest of the year.

If you pick a trillium in the height of its flowering glory, it may not be able to collect enough resources to survive.

5. There are five native trillium species found in Ontario

All are found in the understory of rich, deciduous, or mixed forests. The Drooping Trillium is actually a species at risk here in Ontario primarily due to habitat loss and degradation.

Can’t get enough of this iconic Ontario wildflower? Our past free April wallpaper features trilliums. Decorate your device with these pretty blooms, and bring spring inside!