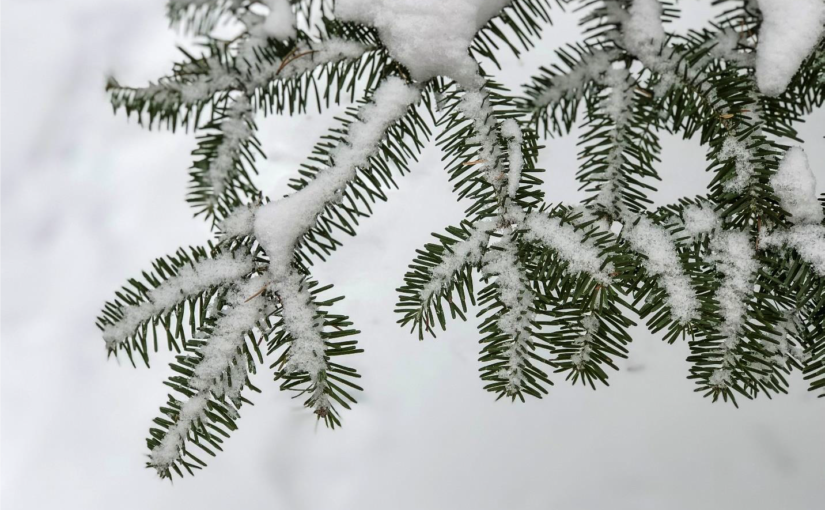 What did one tree say to the other on a snowy winter’s day?

Okay, they may not get cold feet, but what do trees do in the winter?

They can’t go south; they’re stuck in one place. They can’t find a cozy den and hibernate. They just have to stand there, out in the weather and take it, no matter how cold, snowy, or windy.

Winter is a time of scarcity — food is hard to come by. It’s cold (sometimes bitingly cold), and cold saps energy and heat.  It’s also dry. Despite the snow, humidity is lower, and living things dry out. Animals have various strategies that help them deal with winter. They fly south or hibernate or grow thick fur or feathers. They change their diet, find warm places at night, or regulate their body temperature.

Trees have their own strategies for survival in this harsh climate.

How trees beat the cold: the leaves

Leaves are the tree’s solar panels and food factories. Sunlight, water and nutrients from the soil are turned into food for the tree.

In the fall, trees pull out as much of the remaining nutrients in their leaves. If they didn’t, those nutrients would be lost to the extreme cold of winter. For evergreens, like pine and spruce, leaves have evolved into long thin needles.  These needles are covered in a waxy substance that reduces moisture loss and damage from cold temperatures.

Evergreens keep their “leaves” all year long, which saves them a lot of energy each spring, as they don’t have to make new ones.

It also means they can thrive in soil that has less nutrients, and live in habitats that other trees can’t or don’t do as well in.

In fact, evergreen needles — and even the bark of some trees like poplar — can still make food through photosynthesis, even when temperatures are below freezing!

The power source for all cells, even our own, is called the mitochondria. It’s not a lot of energy, just enough to maintain the health of the cell, but the mitochondria of cells exposed to light can still make a little bit of food in temperatures even a few degrees below zero.

How trees beat the cold: the wood

Trees are like huge drinking straws. They’re long, tall, and mostly straight, and they need to get food and water up and down their length, from roots to leaves, and from leaves to roots.

To do this, they have two types of specialized cells beneath their bark that form something like a tube. The first, called the xylem, moves water and dissolved nutrients up from the roots to the leaves. The second, called the phloem, moves food produced by the leaves down to stems, trunks and roots.

These tubes of cells circle the whole tree, just below the bark, and run the whole length of the tree, from roots to leaves.

The extreme cold of winter can damage these cells, meaning the tree could die of thirst and starvation if the damage was severe enough. Trees that live in warmer climates can be damaged by a cold snap. But trees adapted to northern climates have strategies to beat the cold.

“Hardy” trees that can withstand cold temperatures, as cold as -40 ºCelsius, do so through a process called “supercooling.”

For ice to form, water molecules that are below freezing need a particle or surface to grow crystals on. Snow needs dust particles in the air to begin to crystallize on and form snowflakes. Water crystals are deadly to living cells; they are sharp, and will puncture the cell walls, killing the cell.

Cold-hardy trees have cells with no particles in their fluids, and are smooth inside. So, while the water in the cells may get below freezing, it can’t form crystals.

However, below -40 ºC, even the water in cells adapted for supercooling will freeze, killing the cell. That’s why, on very cold nights, you can sometimes hear the wood cracking in the forest. Trees growing in places where the temperature falls below -40 ºC need another strategy to survive.

As you travel further north, to the Boreal Forest and beyond, the number of tree species is fewer. That’s because there are fewer species that are tough enough to adapt to temperatures below -40 ºC. They do this through a process called “extra-cellular freezing.”

The trees that can survive temperatures below -40 ºC are a select group.  Coniferous trees (those whose seeds come in cones) that can stand extreme cold include the Jack Pine, Tamarack, both White and Black Spruce, and Balsam Fir.

The number of deciduous tree species (trees that lose their leaves each fall) is fewer than the number of conifers. The White Birch grows throughout Canada, even into the far north. Trembling Aspen and the related Balsam Poplar are the only other two deciduous trees able to withstand below -40 ºC temperatures.

How trees beat the snow

Snow is another winter nemesis for the tree.

Snow is heavy, and in warm temperatures, wet snow can be very heavy.  Deciduous trees shed their leaves because of snow, as well as cold. Early snows in late fall often cause significant damage to trees that still have leaves on their branches.

Evergreens keep their needles, so they have to deal with snow differently.  They are long and very thin, so the snow doesn’t stick to them they way it would a regular leaf. Evergreen needles and branches still accumulate snow during storms though, and often in colder snowy locations.

Many evergreens have branches that are flexible. They bend under the weight of heavy snow, rather just breaking, as stiff branches do. Flexible branches that bend downwards can also shed snow, meaning they don’t have to support that weight all winter.

Trees can survive the winter even when they have to stand out there in the cold.  They have to; they’re too big to hide, and can’t move anyway.

Animals, on the other hand, need a sheltered place at night and during the storms of winter.

Trees come to the rescue.

They provide many animals with shelter in winter.

Woodpeckers hunt for beetle grubs under tree bark right through the winter months, and maintain lofty homes in holes they excavate in tree trunks.

In southern Ontario, squirrels build big nests of leaves and branches high up in a tree to spend the cold winter nights. In northern Ontario, however, squirrels use the abandoned nesting holes of woodpeckers.

On very cold nights, the Black-capped Chickadee, one of the few birds to stay in northern forests year-round, will gather with other chickadees in tree cavities for warmth. They can even go into a mini hibernation. Both chickadees and Canada Jays use tree bark as a freezer to store food during the winter when times are tough.

The birds make food caches under tree bark — spruce seems to work best — and the tree bark has chemical properties that help preserve the food and retain more of its nutrients.

Check out those hardy trees

Winter is a hard season. That’s why most animals (and even some people) give it a miss. They fly south, hibernate, or just hatch out in spring.

Trees don’t have a choice, but some special northern trees have developed ways to pass the winter safely and await those first days of spring.

You can walk through forests of these hardy north trees in parks like Halfway Lake, Nagagamisis, Kettle Lakes, and Esker Lakes during camping season, or visit Windy Lake in the winter and snowshoe or ski through the silent sleeping forest.