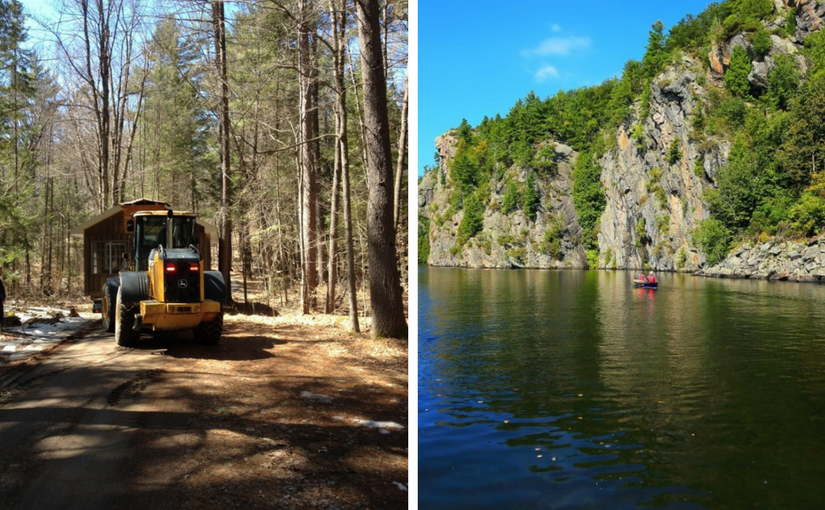 Recently, Bon Echo Provincial Park took advantage of the bending and dampening properties of trees in order to save a number of them from removal during a construction project. Park Superintendent Clark Richards shares the story.

The challenge? Transporting a prefabricated cabin on a transport truck and trailer to the park.

The cabin had to be navigated through the narrow, single lane campground roads, eventually to be placed on an existing campsite.

The cabin was constructed through a cost-effective partnership with Loyalist College in Belleville, Ontario. The Construction and Renovation Technician program provided the expertise and labour at no cost and Ontario Parks provided the building drawings and materials, as well as the transportation of the cabin from the college to the park.

And that’s where things got tricky.

How do you transport a fully built cabin through a park without hurting the trees? Obviously, the park roads and campsites were not designed to fit a cabin 19’ wide (including the roof eave overhang) between the trees on the single lane roads.

But we didn’t want to sacrifice mature white pines, red oaks and sugar maples to facilitate the transportation of the cabin.

And so, another technique was deployed that allowed us to retain the trees.

Have you ever observed coniferous or deciduous trees swaying gently during a prevailing wind? They are able to flex and bend considerably to withstand the force and energy applied from wind. Even large mature trees have tremendous dampening properties so they can absorb gale force winds without being uprooted.

But how did this pliability help Bon Echo staff preserve the trees?

Any tree along the road that did not permit enough clearance was temporarily bent.

Our team placed 10,000 lb ratchet straps on the trees that were preventing passage and then tied them off to a neighbouring tree at a lower anchor point.  The ratchet straps were gradually tightened, which flexed the tree. Some trees were flexed as much as 10 ft to allow enough clearance for the cabin.

As you can see in the frames above, even when bending the trees, the cabin cleared by less than one inch between trees on either side of the road.

A commitment to protection

In the end, a simple and inexpensive technique enabled a number of native trees to remain in place that otherwise may have been removed. Saving these trees helps to maintain the great privacy buffers and natural aesthetics around campsites and along roadways at Bon Echo Provincial Park. Ultimately, these small but important operational decisions help maintain forest health and ecological integrity which is paramount for Ontario Parks in continually supporting its protection objective.

Congratulations to Clark and the Bon Echo team for finding an innovative compromise between human recreation and ecological health!