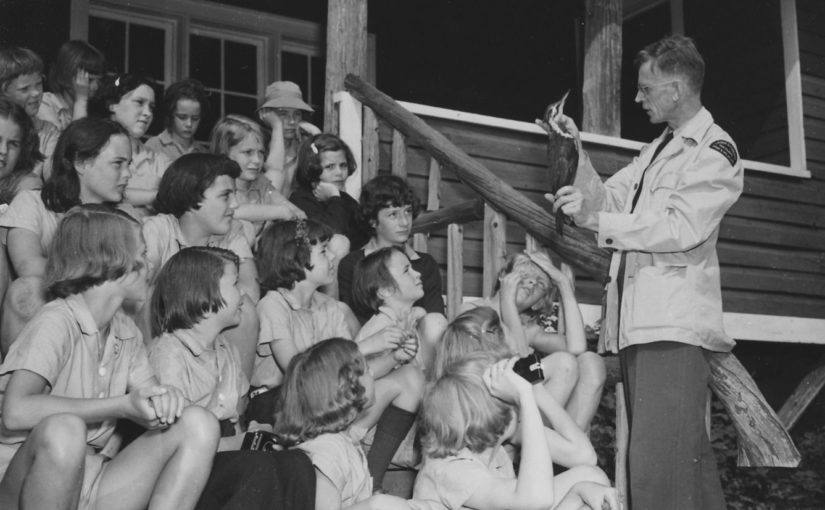 Last year marked Ontario Parks’ 125th anniversary: 125 years of campfires, hikes, nights under the stars, days at the beach, and unforgettable family memories of the countless visitors who use our beautiful park system.

Interpretation, which is a fundamental part of our Discovery Program today, isn’t just about educating visitors about geographic features or significant historical moments; it’s much more than that. It’s about sharing the stories of each park to its visitors in ways that inspire understanding, amazement, or passion in each of them. Finding ways to connect these unique and beautiful spaces to the hearts and minds of those who will listen.

In 1944, Professor Dymond became the first seasonal interpreter in Algonquin Provincial Park. He laid the groundwork for a very successful model that would eventually be used in over 70 other provincial parks.

With a forestry degree and a formative personality, Dick set up an ambitious program of hikes, guided trails, displays, and lectures to introduce visitors to the unique beauty of the park. It was Dick’s own personal enchantment with the natural world that made his programming so memorable. He lived Rondeau!

With a home just outside the park gates, he was able to fully immerse himself in Rondeau’s story. From botany to birds, forestry to human history, he knew it all well.

Ussher published many species accounts and checklists, flowering guides, and bird migration notes, which were fundamental to the park planning and environmental monitoring within Rondeau.

This formed important baseline data for current staff to work off and build upon.

Many of his specimen collections are still in use at the park today and others have been sent to the Royal Ontario Museum for safe keeping. Ussher was around to see the current Rondeau Visitor Centre open to the public in 1964 before retiring from the field in 1969.

Many visitors recall Dick out on the trails, standing with his hands on his hips and gazing up into the trees as if he knew every one of them.

His expert knowledge of the park helped to define its status as a biodiversity hot spot and has inspired future generations of park interpreters ever since.

A special thanks to Daryl Smith, Steve Patterson, Allen Woodliffe and Bob Gray for providing information.