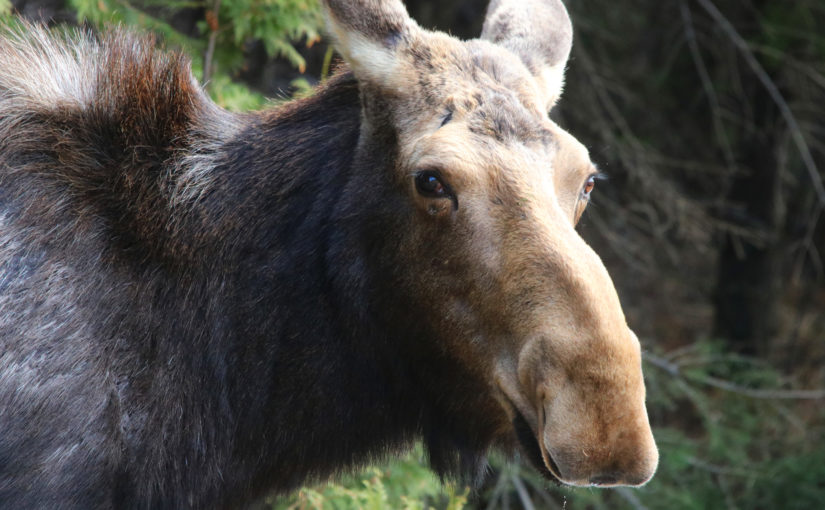 Each year, biologists in Algonquin Provincial Park hear this question from at least one park visitor: “Why did the moose I saw have bald patches?”

In a bad year, there will be many inquiries.

What causes the hair loss?

This hair loss is caused by infestations of winter tick Dermacentor albipictus, which result in very itchy moose continually licking and grooming themselves to the point of losing their hair.

Besides being incredibly annoying to the moose, these itch-inducing bloodsuckers also put the moose at risk of dying from exposure to the elements by way of hypothermia.

Winter tick (or moose tick) larvae attach themselves to moose in early fall during mating season when moose are on the move. The larvae are on the vegetation, waiting (also called questing), with claspers outstretched for a warm moose to walk by. They remain on the moose over winter and begin feeding on the moose’s blood. In spring, the adult female ticks swell to the size of a grape, engorged with blood after months of blood meals.

A moose calf with a high female tick load can lose approximately half of its total blood volume over two to four weeks. Some moose can host as many as 15,000 of these ticks at once.

Blood loss, combined with hair loss can lead to rapid weight loss, depletion of fat stores, and hypothermia, putting the moose at risk of not surviving the winter.

Should we be trying to help?

Although unpleasant to witness, winter tick is a natural parasite for moose. The Dermacentor albipictus has been hitching rides on moose in the forests of Canada for centuries. That said, moose are an important part of the Algonquin ecosystem and significant die-offs of moose have been associated with the moose tick over the years.

There is much we still don’t know about winter tick and its relationship with moose. There is a correlation between weather and tick abundance, with more ticks being present in years with a warm fall and early spring. This relationship may become more pronounced with changing weather patterns.

While the impact from ticks is not enough to eliminate moose from Algonquin, they can have a very real impact on the moose population and this potentially influences future planning at the park.

Since 1984, biologists in Algonquin Provincial Park have been conducting aerial surveys in the spring to assess the degree of hair loss in moose. “By conducting surveys like these, we are able to increase our understanding of the influence of winter ticks on the moose population in the park,” says Algonquin Biologist Jennifer Hoare. “We are also able to share the information with other jurisdictions that have moose populations impacted by winter tick.”

Want to get involved?

Several provinces and states across Canada and the northern United States have become increasingly interested in monitoring winter tick and the relationship with moose populations, as several of these areas are experiencing a decline in moose numbers.

You can help by reporting your observations of winter tick through iNaturalist (learn more about iNaturalist). Simply take a photo of the moose, identify or tag your photo with “winter tick,” and describe the amount and areas of hair loss. You can also document winter ticks observed on the ground, for example in a moose bed. These observations help biologists determine the timing, distribution and levels of winter tick in any given time period.

In Algonquin Provincial Park, you can also report your observations to park staff. Just remember: as alarming as it may be to see, hair loss on moose is a natural phenomenon.

(Park users should be reassured that the moose tick is rarely a problem for humans. However normal precautions should be taken when you are walking in the woods.)