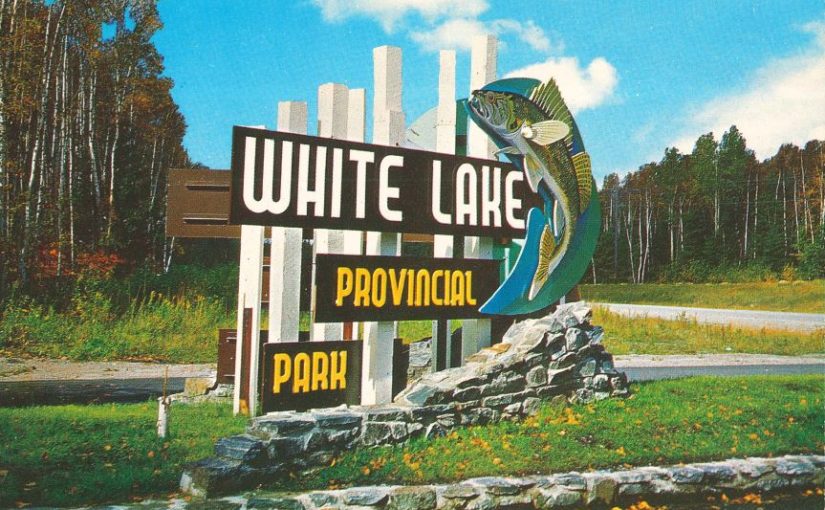 2018 marks Ontario Parks’ 125th anniversary and we’ve been digging through our archives in search of some of the coolest vintage photographs, documents, and artifacts. Throughout the year we are sharing our discoveries in a series of OP125 blog posts!

This post showcases a collection of vintage postcards featuring a few of our beautiful parks in northwestern Ontario!

Sharing camping experiences with friends and family hasn’t always been so instantaneous. With cellphones in our pockets and at least one bar of reception, we can easily share a snapshot (or a boomerang!) of an awesome campfire, a gorgeous sunset or a jaw-dropping view with our loved ones…or with everyone! Postcards are the Instagram of the past, an ever-popular way to let family or friends know where you’ve been, what you’ve seen, and where you’re going next.

Postcards were and continue to be collected simply as a keepsake from a trip. But with the ease of digital sharing, postcards aren’t as popular as they once were.

Roll back the years with these postcards of days gone by…

This postcard features Lake Superior Provincial Park, known for scenic views that will take your breath away. Whether you’re staying in the park or just driving through, be sure to pull off of the highway to take in the gorgeous views of Lake Superior.

On the back: Lake Superior Provincial Park, Ontario. One of the “Lookouts” along the Lake Superior Route, Trans-Canada Highway, Ontario, Canada.

The stretch of the Trans-Canada Highway between Sault Ste. Marie and Wawa was completed and officially opened in 1962. Before the highway, most visitors arrived to the park by boat or rail to stay at remote lodges.

The completion of Highway 17 opened the park and northwestern Ontario to more tourism opportunities — including camping!

An “Invitation to a fun-filled vacation”

White Lake Provincial Park was established in 1963 and is a family friendly park featuring hiking trails, swimming, fishing, and Discovery programs for families with kids. As indicated by the walleye on the entrance sign, White Lake is known for its fantastic fishing opportunities.

On the back: “Invitation to a fun-filled vacation” The famous Lake Superior Route, 1300 mi through Ontario, Michigan, Wisconsin and Minnesota, completely encircles the world’s largest body of fresh water (32, 000 mi2). On the Canadian side, the province of Ontario has created many parks which offer camping facilities in scenic natural settings, such as here along the northeast section of the route, where the highway crosses the narrows between the lower and upper half of White Lake.”

From prisoner of war camp to provincial park

Notice how the campground area is wide open and sparse, with young trees planted? That’s because Neys operated as a prisoner of war camp during the Second World War. The trees were completely cleared for the construction of the camp.

A common pastime of prisoners of war included painting their own postcards and sending them to their loved ones back home. Their postcards often depicted the northern Ontario scenery, wildlife, and daily camp activities.

After it was officially shut down and the buildings were dismantled, Red Pine was planted to reforest the area during the late ’50s and early ’60s.

On the back: On the scenic northern shore of Lake Superior. The famous Circle Route. Formally a German P.O.W. camp is now a beautiful park that offers fishing, swimming, hiking and wilderness and wildlife. Located between Terrace Bay and Marathon. [Little] Pic River Bridge in the background.

In 1965, Neys was established as a provincial park. Neys is a hidden gem rich with cultural heritage and a quintessential wilderness feel, not far off the Trans-Canada Highway.

Fashion by the falls

A stop at Rainbow Falls Provincial Park to hike along the Rainbow Falls Trail is definitely worth your time! A stairway and a series of platforms follow the falls down to a sturdy bridge over the cascades.

Outdoor camping apparel has certainly evolved into more practical attire over the years, however the awe-inspiring beauty of Rainbow Falls has remained constant.

While visiting Rainbow Falls, take advantage of the warm inland waters of Whitesand Lake and try new-age water sports like SUP or water biking. Equipment rentals are available in the park.

Rushing River Provincial Park is located along a series of rapids on Rushing River and on the shore of Dogtooth Lake. From this bird’s-eye view, the rapids can be seen to the left, Dogtooth Lake in the background, and Highway 71 in the foreground.

On the back: 17 miles south east of Kenora, on Highway 71, showing Dogtooth Lake in the background. Kenora, Ontario, Canada.

The area that is now Rushing River Provincial Park was once owned by the Department of Highways (now the Ministry of Transportation). Part of this land was used as the office and quarters of the construction foreman when Highway 71 was being built.

Highway construction began in 1934 and the office was built in 1945. Eleven acres was set aside as a recreational reserve for highway workers. The old foreman’s office is now the park’s museum.

In 1957, the Department of Lands and Forests (now Ministry of Natural Resources and Forestry) acquired the land and Rushing River officially became a provincial park in 1958. Since then, the park has been a favourite camping destination, offering endless opportunities for exploring.

Many of our parks sell postcards in their park stores. Why not take a moment to share your experience the old-fashioned way by sending a friend or family member a postcard to tell them about your camping adventures this summer! Who doesn’t love getting snail mail?

Do you have vintage postcards in your personal archives? Share your photos by using #OP125. Join the celebration!