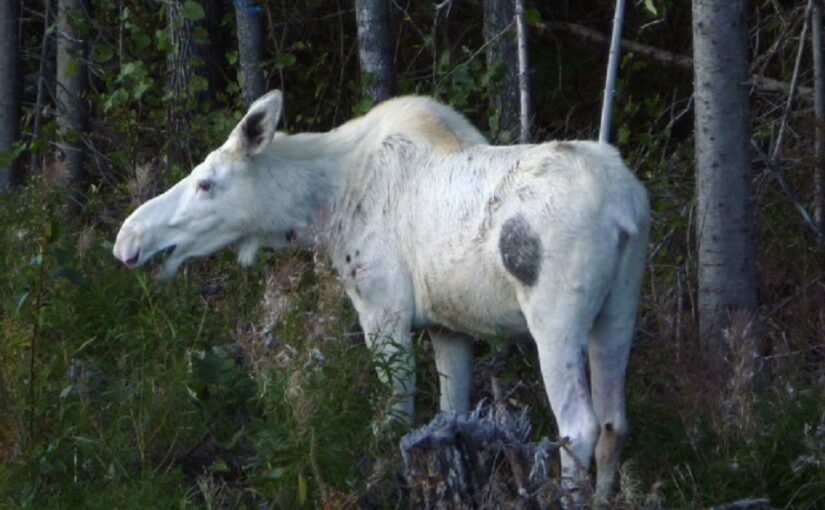 Everyone knows that Moose are brown, even if they’ve never seen one in person.

Big and brown. Even Bullwinkle, the famous cartoon Moose is brown.

Moose calves can be very light-coloured when they are very young — even a bright cinnamon colour, but they always turn brown as they get older. Always.

There is a place, however, where the Moose aren’t following the rules… west of Timmins there’s a place not shown on any map.

You could call it “The White Moose Forest”.

Some locals call the ghostly inhabitants “Spirit Moose”.  In this forest some of the Moose are white. Yes, completely white.

The little town of Foleyet and Ivanhoe Lake Provincial Park seem to be at the centre of this White Moose Forest. Folks local to this area have seen them, surprisingly, while driving along Highway 101. The Ivanhoe Lake park superintendent has seen them.

So if Moose are supposed to be brown, why are some of these ones white?

Could there just be an unusual number of albino Moose? An albino animal, or even a person, lacks pigment in their hair, skin, and eyes. These white Moose have brown eyes, though… so they can’t be albino! Some of them have flecks of brown fur, and a few are patchy with white and brown coats.

It seems that it’s all about genetics.

The gene that controls the colour of their fur usually makes it brown.  In the case of the white Moose, this gene is turned off, so it doesn’t give the fur any colour, and that lack of colour makes it look white.

For some reason, there seem to be a lot of these white Moose around Ivanhoe Lake and Foleyet. If you visit the area, you aren’t guaranteed to see a white Moose, but your chances are better here than just about anywhere else.

For more information about camping at Ivanhoe Lake Provincial Park in the “White Moose Forest”, visit their webpage!