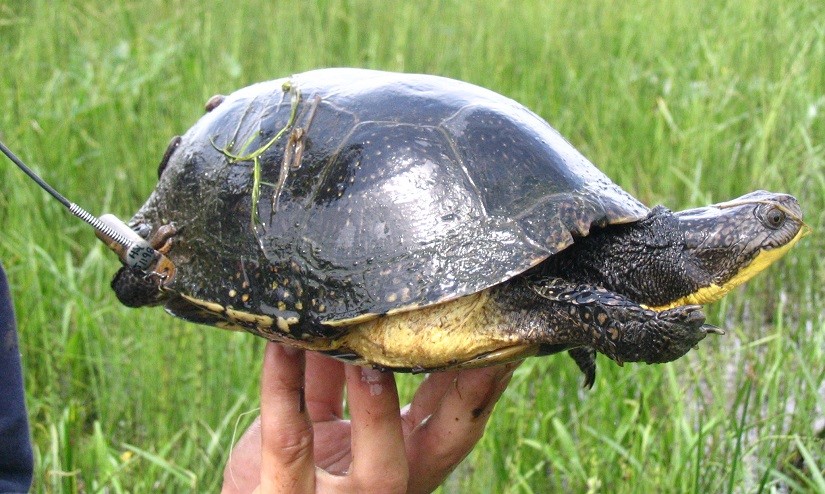 In today’s post, Brad Steinberg, our Natural Heritage Education & Learning Coordinator, shares the story of how he (kinda) proposed to a Blanding’s turtle.

It was September 30, the last day of trout season in Algonquin Provincial Park. I was trudging out a portage with a canoe over my  head when I saw it: a big, beautiful Blanding’s turtle, perched right on the edge of the old roadway.

With her bright yellow chin and big domed shell, she was unmistakable. But before I could react, she slipped into the flooded ditch and disappeared beneath the blanket of rusty maple leaves that floated on top of the water.

It isn’t every day you find a turtle hibernacula (a winter hibernation site), especially by chance, so I was pretty excited. Turtle research in Algonquin had shown us that by the end of September, Blanding’s turtles have moved to their hibernation sites in preparation for winter.

Hibernating isn’t as easy as just burying in the mud for Blanding’s turtles. They’re pretty much helpless in the winter, so they need to find a spot where they won’t be too exposed to otters, which would love to snack on a hibernating turtle. They also don’t want to be in water that is too shallow and risk ice freezing to the bottom and killing them.

An ideal location is a pond with a bit of groundwater flow or a spring that keeps the turtle cold, but doesn’t freeze solid. The ditches alongside old roads sometimes create these conditions, and some turtles are attracted to them in the fall.

Naturally, when I spotted that turtle, I put down the canoe and jumped into the ditch to try and catch it in order to get measurements like length, weight, and any markings that could help identify it should we ever encounter it again.

The water was about three feet deep, and cold enough that I briefly considered joining a choir. However, feeling around for a turtle in the bottom of a flooded ditch strewn with leaves and sticks is not as glamorous or easy as it sounds. After ten minutes of fruitless searching and realizing that cold ditchwater was now creeping up my armpits, my enthusiasm waned somewhat.

Giving up, I climbed out of the water, picked up the canoe, and continued on my way back to my car, my boots making squishy noises with every step.

It was only after I had tied on the canoe and started the drive home that I noticed my wedding ring was gone and in its place was a pale tan line. It had fallen off somewhere in that flooded ditch.

I considered going back, but by then it was dark, and I was cold and wet.

So somewhere, in the heart of Algonquin Provincial Park, a Blanding’s turtle is snoozing away the winter with my wedding ring as company. (The ring has since been replaced, and conditional forgiveness was graciously granted by my wife, but next spring I have some ditch-diving to do.)