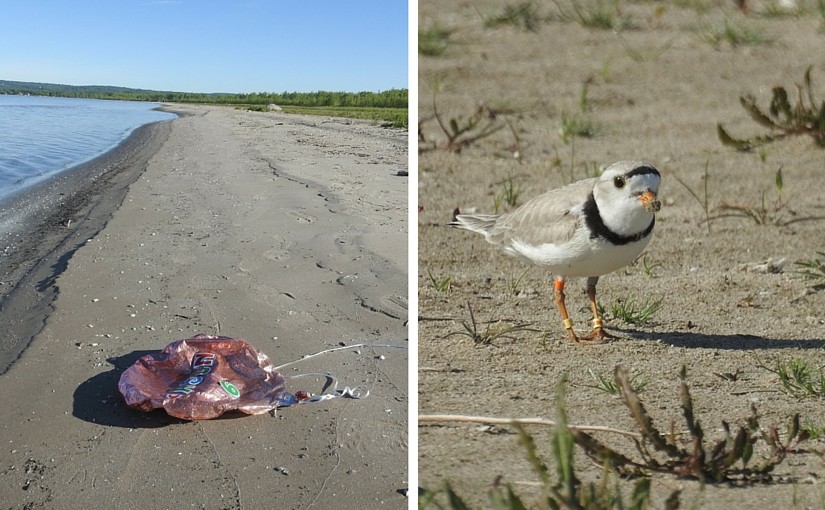 I don’t know Jason. But I do know he turned six sometime in the last two months and he had a wonderful party with cake, presents and balloons, surrounded by friends and family.

I hope he had a good time, but I wonder if he knows the legacy of his sixth birthday — from my perspective — is unsightly litter, extra work and possibly untimely death.

It’s those balloons, you see. So pretty, but when you let them go, they float away, and they have to come down someplace.

Presqu’ile is a peninsula that sticks out about 3 km into Lake Ontario. We are about 140 km east of Toronto, which puts us down-wind and down-current from about 5 million people on both sides of the lake.

We get a lot of garbage floating into and blowing onto our westward facing beach. And nothing is as insidious as the helium balloon.

The balloon is made up of a material that seemingly never biodegrades and just lies on our beach. Forever.

But the strings attached to the balloon are worse.

With the exception of old fishing line (don’t get me started!), the string from balloons may be the biggest killer on the beach. This string tangles in birds’ legs, and gets around snakes and frogs, cutting their circulation and keeping them from feeding. They die.

What is even more frightening this year is we have piping plovers nesting on our beach for the first time in 100 years. This endangered species is a small, plump, little ball of feathers that runs around the beach. If we are lucky, we will soon have even smaller little balls of fluff running around when the chicks hatch. String from just one balloon on our beach could reduce the total global population of this species by a significant percentage.

It is on the plovers’ beach that I found Jason’s balloon the other day.

Most six-year-olds I know are enthralled by the natural world and love all animals. I’m sure he would be mortified if his balloon ever hurt an animal.

It won’t happen this time as I picked up his balloon (and about ten others!) on my short walk along the beach. But I’m not out there every day, and the winds and waves never stop bringing them to our shores.

I don’t want to ban helium balloons, but please keep them indoors and don’t allow them to roam; otherwise, the price could be just too high.