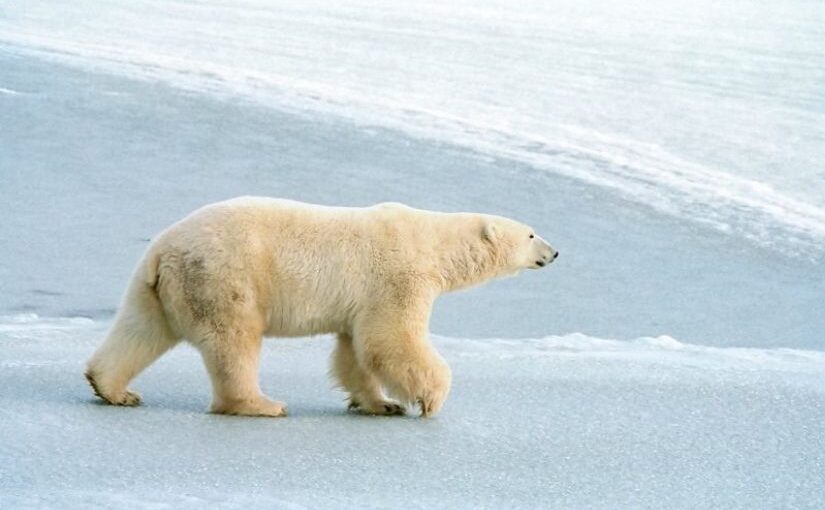 Ontario’s frozen ocean coastline and ice flows of Hudson Bay and James Bay are home to the world’s largest predator on four legs. The story of the Polar Bear is one of survival and adaptation in one of the world’s coldest regions.

Polar Bears are able to withstand brutally cold temperatures with their dense fur, thick fat layer, and large size. Males can weigh in at up to 700 kilograms (1,500 pounds)! They are so well insulated that they are almost invisible to infrared (heat) sensing photography. Although appearing to be white, the Polar Bear’s fur is actually translucent. Polar Bears look white because each hair is a clear, hollow tube which reflects heat from the sun which is then absorbed by their black skin.

The scientific name of this bear, Ursus maritimus, reflects the species’ aquatic habits. These mammals are superb swimmers covering great distances and have been seen 60 km from shore. Their diet is primarily made up of seals which are hunted on the winter sea ice. In late summer, when the ice has broken up, the bears are forced onto the coastal tundra. During this period they generally do not feed but rely on stored body fat.

The Polar Bear is a species at risk and with the reduction of sea ice, climate change is of great concern to the Polar Bear’s future survival. With rising temperatures, evidence indicates that the extent and duration of arctic sea ice will continue to diminish. This means there will be less opportunity for the bears to hunt seals. Polar Bear Provincial Park is in the traditional territories of the Weenusk, Attawapiskat, and Fort Severn First Nations.

Polar Bear Provincial Park underwent the largest Environmental Remediation Project ever to be completed inside a protected area! Learn more about the restoration.