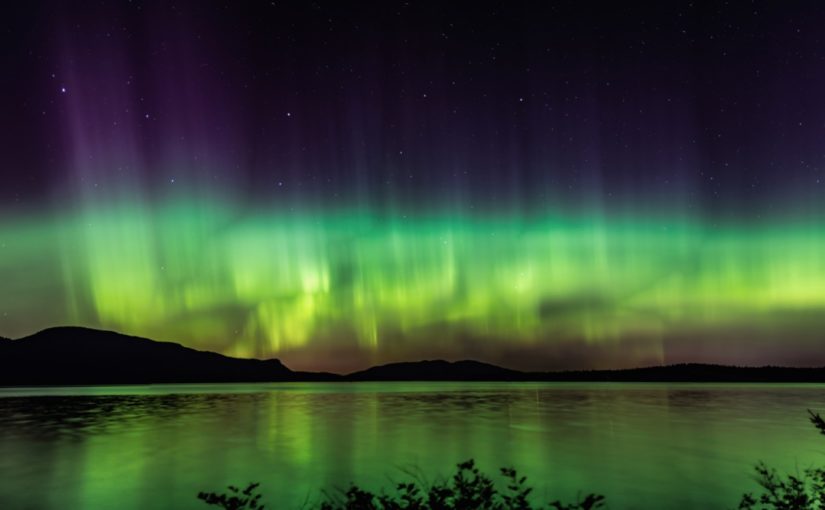 Seeing the magnificent Northern Lights is a bucket list item for any nature lover.

But did you know that the Northern Lights are caused by charged particles from the Sun?

The Northern Lights, or Aurora Borealis, is the name given to an often-ethereal band or curtain of faint light seen towards the northern horizon. Generally, the light is so faint that the light pollution of even a small town can wash it out.

However, in the dark skies of many of our provincial parks, the Northern Lights can be spectacular.

The science behind Aurora Borealis The magical glow of the Northern Lights occurs when a plasma of charged particles emanating from the sun travels along the solar wind, and interacts with the Earth’s magnetic field, or magnetosphere. This creates an intense magnetic current.

When large amounts of charged particles are involved, the Earth’s magnetic field can become so compressed that it is no longer capable of deflecting all the material away from our atmosphere. Instead, the charged particles enter the atmosphere and, like a neon sign, charge up and excite the atmospheric gases. The resulting glow from the charged gas is what creates the light we see.

The colours of Aurora Borealis can be varied and beautiful. Oxygen and nitrogen gases, when excited by energy, produce different colours. In addition, the height of the aurora affects the ratio of oxygen and nitrogen blending some of the colours.

The sun has an 11-year cycle of high and low activity. When the sun is particularly active, more material breaks free into space, and sometimes towards the Earth.

Unfortunately, we are nearing the low point of activity (solar minimum), and it is unlikely, but not impossible, that we will see good displays of Northern Lights this year from our latitudes.

Many Inuit along the west coast of Hudson Bay say that one can forecast the weather by the Northern Lights. If one sees a low hanging steady glow or an arc of light, then good weather is forecast. However, if one sees a dynamic curtain/band type aurorae then the forecast is for bad weather ahead.

There is one more place where we have seen Aurora Borealis from space. This is our own planet!

The image above shows the aurora as seen from the International Space Station (ISS).

Have you ever seen Aurora Borealis in a provincial park? To learn more about astronomy, visit our Eyes on the Skies posts.