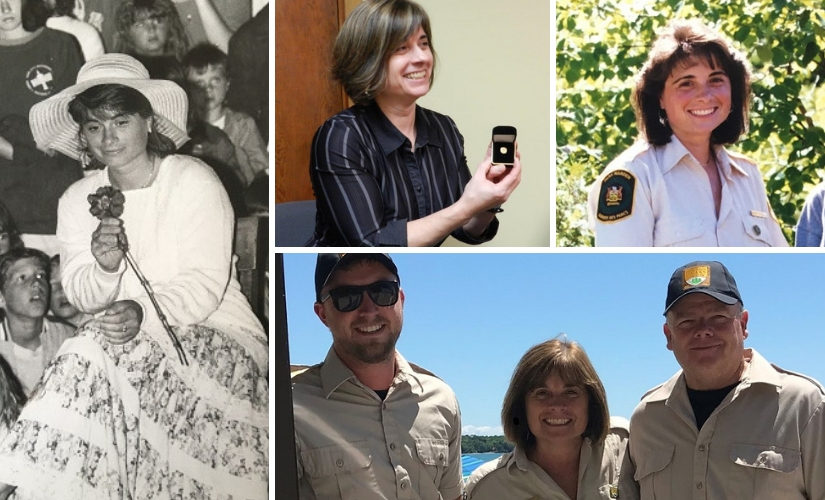 Ontario Parks is nothing without our amazing staff. There are so many hardworking people behind each and every visit to our beautiful provincial parks.

One of them is Agnese Bortolussi.

On International Women’s Day, we would like to say thank you to Agnese (Aggie) for her years of hard work!

Aggie is the Assistant Park Superintendent at Sandbanks, North Beach, and Lake on the Mountain provincial parks. “There has never been a dull moment working in parks, because you never know what the day will bring.

Whether it is helping a customer, mentoring students, rescuing a turtle, cleaning the beach, being part of a task team, participating in interpretive programs or special events, or dealing with park challenges such as flooding or closing the park, it changes from day to day, which makes life interesting.”

She’s helped thousands and thousands of visitors enjoy their visit to Sandbanks, first as Senior Operations Technician in 1988, and then as Assistant Park Superintendent since 2011.

There have been a lot of changes and growth over the years – new main entrance, new camper reservation services (we used to process reservations manually!), new campgrounds, new day-use areas, roofed accommodations, and new trails.

It’s been exciting to see that growth and change and be a part of all of it.”

Finding her way to parks

Aggie attended Lakehead University in Thunder Bay for Outdoor Recreation and Natural Science from 1979-1983. During the summer months, she worked for the Ministry of Natural Resources and Forestry as a supervisor at a Junior Ranger Camp near Quetico Provincial Park.

After graduating, she helped organize (and participated in) the Rendez-Vous Fort William Expedition. This was a re-enactment of the 1,200 km voyageur fur trade route from La Chine Montreal to Old Fort William in Thunder Bay, and was part of the 1984 Ontario Bicentennial celebrations.

“Having graduated with an Outdoor Recreation and Natural Science degree from Lakehead University, getting hired by Frontenac Provincial Park as the Wilderness Skills Coordinator to organize and instruct outdoor skills was like a dream come true.”

Aggie has given back to the provincial park system in so many ways.

She has been actively involved with the Friends of Sandbanks volunteers for the last 25 years. She was responsible for organizing some of their main annual events, including the Sandbanks Fun Run and the Terry Fox Run.

In 1993, Aggie was the Centennial Liaison for the Southeast Zone of Ontario Parks. She worked with staff from around the province to coordinate Centennial celebrations throughout Ontario Parks as part of the 100th anniversary of Algonquin Provincial Park.

Aggie has helped out at Sandbanks Provincial Park in just about every way possible. She has participated in task teams, and been involved in all aspects of park operations and maintenance.

She has worked the gates, done traffic control, helped education staff at special events, planted trees and marram grass, and advised on Workplace Discrimination and Harassment Prevention. She even trained as a firefighter!

Aggie has made a difference in the experience of so many visitors at Ontario Parks. Thank you, Aggie, for your many wonderful years of service!

“After 34 years working in parks, I can still honestly say that I love my job and enjoy coming to work. The best part of my job has always been the people that I work with. As hectic and challenging as it can be here at Sandbanks, the staff make all the difference.

This place has been like my second home. I can’t imagine working anywhere else.”