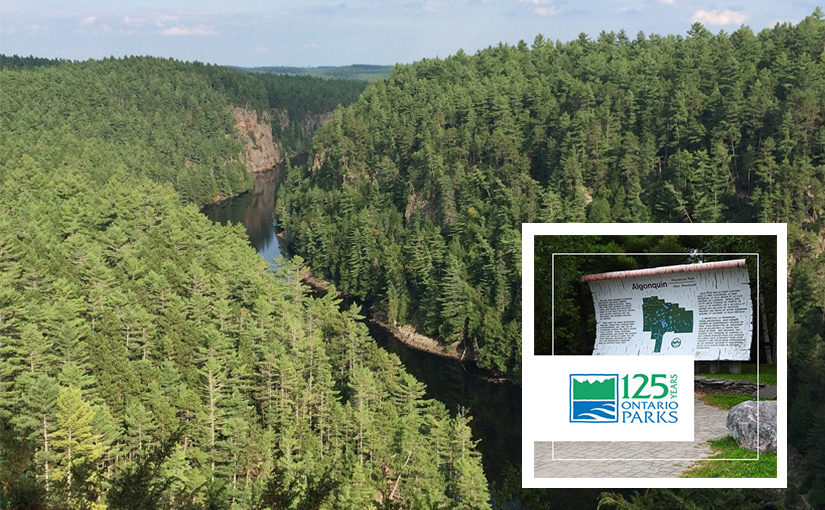 The car ride to our favourite destination always seems to take forever. We always look for special landmarks along the way to let us know we’re getting close.

Some of these landmarks are special to you, but others are truly iconic. They let you know that you have “arrived”. For lovers of Algonquin Provincial Park, the birch bark map is that iconic landmark.

Algonquin’s legacy project is to refurbish and update the park’s iconic sign to provide a warm, familiar welcome to visitors for years to come.

The history of the map Stopping at the West Gate of Algonquin Provincial Park, you know you are there the moment you get out of the car. Nestled by some trees, an immense birch bark scroll greets you. The scroll tells the story of Algonquin.

The scroll is a must-see for Algonquin visitors. Have you taken a photo in front of the map? Does your family insist on taking photos there every year?

For thousands of visitors, the giant scroll is the first thing they see of Algonquin, and it has been for decades. In fact, the very first version of the scroll was installed shortly after the West Gate was opened in 1953. Over the years the sign has been updated several times. Some elements of the scroll have changed. For example, the name of the government agency that administers the park went from the “Department of Lands and Forests’ to today’s “Ministry of Natural Resources and Forestry.”

Despite all of the changes in parks since the map’s creation, some things have stayed the same. The scroll always features a map of the park highlighting the major features, which helps orient new and returning visitors. Birch bark grows on, you guessed it, birch trees. The white, flexible, and paper-like bark makes it rather unique among Ontario’s trees.

Bark from Paper or White Birch trees has been used to make baskets, containers, and even canoes! Birch trees are not uncommon on the Algonquin landscape. The presence of a large birch tree alludes to changes in the forest long ago, telling the story of the area.

The huge birch scroll at the West Gate does the same thing. The map tells the story of what you might expect on your visit to Algonquin. In 2018, we are excited to be updating our famous scroll once again!

In honour of the 125th anniversary of Algonquin Provincial Park and Ontario Parks, we are updating the birch bark map and the information on it.

Here is where you have the chance to help! In celebration of the 125th anniversary, Ontario Parks is launching an online donations program. The public is invited to give back to the parks they love by donating to a series of legacy projects.

Maybe the next time you pass the West Gate, you can have a look at the new birch bark scroll your donation helped produce. We hope you will choose to donate, and share your passion for Algonquin with visitors for years to come.

If you’d like to help us refurbish and update Algonquin’s birch bark map, visit our new donations page.