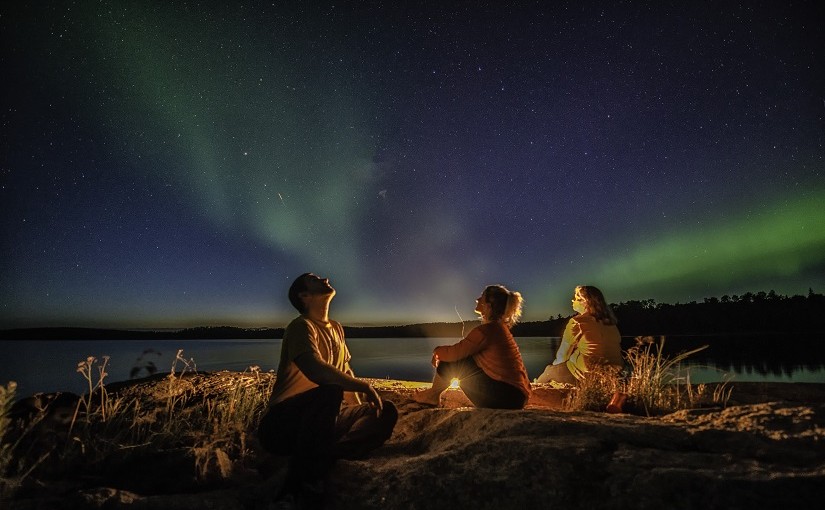 Humanity’s fascination with the celestial bodies dates back millennia.

Camper families love stargazing especially from mid-July to late August during the Perseid meteor shower. At peak time (August 9-13, 2016) — if the skies are clear — you can see up to 50-100 meteors an hour!

Star parties are held in our parks every summer, especially in Northern Ontario, where there’s less light pollution. Join Peter Toth, astronomy enthusiast and past president of the Royal Astronomical Society of Canada, for a general astronomy presentation on constellations, planets, telescopes, deep space photography and more! Join Astronomer Bill Gardner at the Killarney observatory as he helps us to explore the constellations and wonders of the night sky! Don’t miss an up-close look at the Perseid Meteor Shower on Friday, August 12, or the conjunction of Venus and Jupiter on Saturday, August 27.

Join park staff at Rushing River’s Southside Beach to watch the Perseid meteor shower at its peak. Plan to spend at least an hour outside; the meteors often come in spurts and are interspersed with lulls.

Have a burning astronomy question ? Want to experience the night’s sky up close? Or simply looking to gain a little knowledge? Meet the Sudbury Astronomy Club and get some telescopic and binocular viewing of the night’s sky. Summer stargazing at its best! Come see a million stars with internationally acclaimed astronomer and author Terence Dickinson as your expert guide. Explore the world of backyard astronomy, and then gaze through large telescopes at the majestic night sky (weather and clouds permitting).

Peter Toth, astronomy enthusiast and past president of the Royal Astronomical Society of Canada, will be giving a “laser show” of the night sky at Rushing River’s Southside Beach. Using a laser pointer, Peter will point out constellations. Park visitors will have an opportunity to look through a telescope to view stars and planets!

A “out of this world” weekend with the Thunder Bay Royal Astronomical Society. The club is here to show you the universe and beyond.

Love the OP nightlife? Keep an eye on our event calendar!