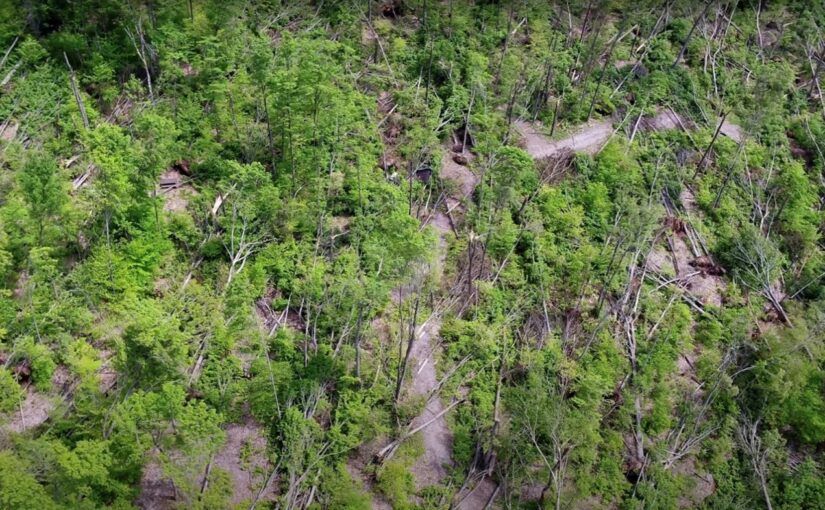 When a massive derecho storm tore a path through Ontario on May 21, 2022, Bon Echo Provincial Park was directly in its path.

What is a derecho? It’s a long-lived, fast-moving thunderstorm with straight line winds that cause widespread damage. With this type of storm, the worst of it comes within a couple minutes of it hitting.

I was working in the Visitor Centre when the storm hit, and it seemed like only moments between the first few drops of rain and the sound of massive pine trees hitting the forest floor. Along with my fellow colleague, Emma, and a dozen park visitors, I sought shelter in the Visitor Centre.

We watched through foggy windows as a white pine crashed onto the porch of Greystones Gift Shoppe and Café (the park store) where only moments before, campers were seeking refuge from the rain. Luckily visitors were quickly ushered inside before the tree fell. This was the moment that impacted me the most, not knowing whether those in Greystones were safe, how the rest of the campground was, and feeling the responsibility to reassure the dozen campers that were in the Visitor Centre that everything would be okay. Luckily, Emma was able to help me keep a level head and we focused on reassuring the visitors with us, by providing crafts for the younger visitors and telling stories about Bon Echo’s history.

As the storm subsided, we were able to check on those in Greystones and get a clearer picture of just how much the forest around us had changed. The storm left the park without power, water, and cell service. Every roadway in the park was blocked by trees and large branches. If it weren’t for some campsite sign posts, it would have been difficult to recognize there was even a campsite there to begin with.

The western side of the park was hit particularly bad, with branches and trees making it look like there was no road at all. Areas of the park resembled a logging operation more than a provincial park. I was incredibly thankful that there were so few injuries considering the amount of damage the park experienced.

It was impressive to see the sheer size of some of the root systems from the fallen trees. Seeing the underground world of trees that is usually hidden from view. It was amazing to see how Bon Echo staff, campers, and surrounding community really came together in the aftermath of the storm. Chainsaw crews from multiple different parks including Balsam Lake and Kawartha Highlands, and local volunteer fire crews came to help clear roads and debris from people’s property. A local arborist and his family were also quick to help clear roads. Park visitors were incredibly understanding and supportive during the storm, and the subsequent evacuation, even though many had damage to their equipment or vehicles due to the storm. Everyone really went above and beyond to get the park back up and running as soon as possible.

Although Bon Echo may look different than it once did, this storm has offered an opportunity for regeneration. Many of the trees that fell were large mature trees or those that were sick and dead. With an opened-up canopy, new growth will compete for light and create a healthy forest community with trees of different ages and sizes. While it is sad to see how greatly impacted our beloved park was, nature is resilient and knows how to bounce back.

If you visit Bon Echo this season, you’ll likely see some remnants of the derecho storm. While your initial reaction may be one of sadness or shock, I hope visitors will also feel a sense of appreciation and respect for those that were impacted, those that helped the park re-open, and a sense of hope and wonder for how this event will shape the future of the park we love.