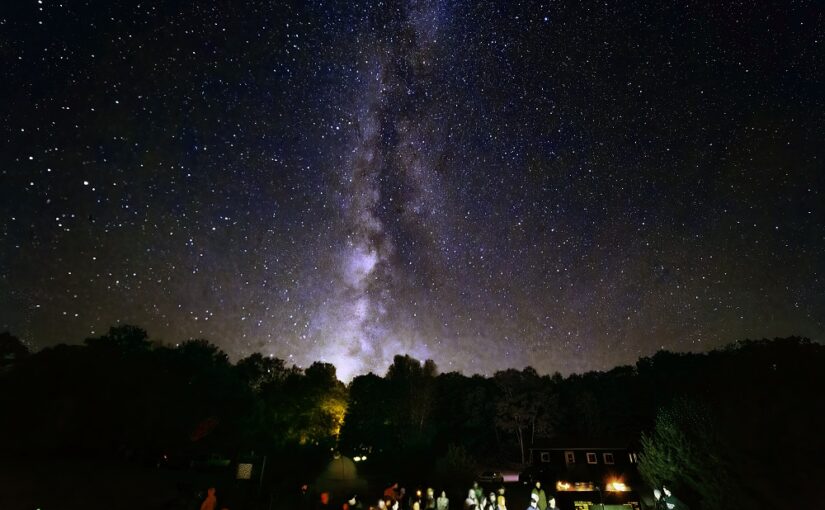 Stars over Killarney is an annual festival celebrating the connection between the beauty of Killarney Provincial Park with an element of astronomical knowledge.

Take a look at all the fun that took place this year:

The program commenced with a recognition of the National Day for Truth and Reconciliation.

Ojibwe knowledge carrier and professor of Indigenous Studies, Will Morin, welcomed everyone with a traditional teaching:

“The Ojibwa word for heart is ode (oh-day) which is also in the word for drum/odewagan (oh-day-way-gun), with four syllables, like the four chambers of the heart, the four colours of the medicine wheel, the four directions and our four grandparents. When we use the drum and sing, we are honouring all of you and your ancestors.

“The song that was shared is called Biindigen (been-dih-gen), a welcoming song.

“The word element of di related to n’dis, the umbilical cord, connects us to our mothers, and di denotes mutual benefit. The word biindigen means ‘come in so we both benefit’. The words in the song ask for listeners to come in, to speak with us, and walk with us.” After the welcome and recognition of the day, the assembled group enjoyed the beauty of the Killarney Dark Sky Preserve through its observatories and telescopes brought by the Sudbury Astronomy Club.

Saturday: A day of geology, astronomy, and space exploration

The next morning, a group assembled at the Chikanishing trailhead to participate in an extraordinary three-hour hike with world-renowned geologist Dr. Gordon (Oz) Osinski. He explained the connection of the spectacular geology to the ancient forces that created it. In the image below, Dr. Osinski explains the formative periods of Killarney, including the formation of granite from magma, quartzite from mountain, and many current features from glaciation. Who knew that these gentle grooves originated from the violent action of glacial waterfalls, water falling as much as a thousand metres before crashing upon the rock and rushing upwards as if driven by a high-pressure hose! Rather than formal presentations, the afternoon provided visitors with a variety of optional drop-in programs. These types of programs are more casual and personal. They were greatly appreciated by all those involved.

At the Waasa Debaabing (Anishinaabemowin for “the far in the distance seeing”) Observatory, a solar filter was installed to allow viewing of the sun in white light. Those with smart phones could snap up a couple of quick images of the sun for a celestial souvenir! Check out the scarf Kate made, featuring Cygnus, Draco, and other constellations. At the amphitheatre, Vicki and Dr. Bill Sherwood led a comet-making workshop. They demonstrated how comets are made using dry ice, charcoal, and organic compounds.

Afterwards, the audience was treated to a realistic crater-making demonstration from Dr. Sara Mazrouei.

Using flour as a base to represent subsurface material on the moon, Dr. Mazrouei added cocoa powder to represent the lunar seas (mostly made of dark basal from ancient lava flows). Participants dropped stones and pebbles of different sizes to see the results. Here we can see a slow-motion video of the cratering demonstration:

The imaginary asteroid arrives from above and explodes with the surface material upon contact. The explosion also evacuates a substantial amount of subsurface material as white ejecta. The ejecta eventually forms a white continuous ejecta blanket surrounding the crater.

In the final few frames of the video, you can see some fragments high above the surface that land quite far away from the crater (out of the pan).

Finally, the walls of the crater form and the original impacting object is all but lost. This is exactly what we typically find with many types of craters observed without erosion on the moon.

The traditional twilight talk was held after dinner in which the keynote speaker, Dr. Osinski, led participants on his journey of exploration from geologist to astronaut instructor in Sudbury and Devon Island in the arctic. The presentation began with a discussion of space exploration and the Apollo visits to the moon.

From there, it moved on to cratering and how the craters on the moon have been well preserved due to the moon’s lack of erosion.

The presentation continued with a remarkable sequence of photos comparing features on Mars to those on Earth, with the audience trying to guess which image was from which planet (we could seldom tell the difference).

The striking comparisons between these two planets made it very clear to us why it is so important that we study the geology of Earth to learn and recognize features that our astronauts will discover as they embark on future journeys to the moon and Mars.

Dr. Osinski’s presentation finished with the famous earthrise image captured by astronaut Bill Anders, the view that inspired astronaut Jim Lovel to state that, seeing “the Earth from here [is as] the grand oasis in the big vastness of space.”

Dr. Osinski pointed out that every person who has had this view remarked on how small the Earth felt and how important it was to learn about our planet and protect it for future generations.

After the presentation, the audience travelled to the observatory complex to view live images of the four largest planets in our solar system: Saturn, Neptune, Jupiter, and Uranus. The images below are single frames from the video that was viewed that night. Each planet was described by our York University Astronomer in Residence – Quinton Weyrich.

In addition, we played the TSO’s recording of Gustav Holst’s the Planets, sharing the movements inspired by each of the planets that we were examining together. In an amazing feat of technology, these live video streams (minus the music) from the Killarney Provincial Park Observatory were sent to York University who then, in turn, displayed them as part of Toronto’s Nuit Blanche festival!

Note: the sky was very turbulent that night and images were not very stable and sharp. Astronomers would not normally image planets under difficult “seeing” conditions such as this.

Above is a video of Jupiter presented at the Stars over Killarney event.

The Killarney Provincial Park and the Friends of Killarney Park thank the Toronto Symphony Orchestra for providing the recording of Holst’s The Planets during Stars over Killarney 2022 and an excerpt of “Jupiter” for this post.

The event continued long past midnight with refreshments provided, and funds going to the Friends of Killarney Park in support of their ongoing activities to improve visitor experiences within the park.

Humans: From the soils, the rocks, and the stars

The next morning, Park Interpreter Marisa Roefs led the group through the beautiful Granite Ridge Trail on a hike that explored our connection to the plants and animals that call Killarney home. She started by explaining the exquisite make up of all things from the basic elements (carbon, hydrogen, oxygen, etc,).

With that connection made, Marisa went on to explain our relationship to the soil and rocks of Killarney.

She finished off by tying it all together to the Stars over Killarney event by connecting our origins to the giant furnaces and death throes of ancient stars.

Understanding our place in the universe from the vantage point of the top of the Granite Ridge Trail was a truly perfect way to end a perfect weekend! Thank to our partners: Science North, the Toronto Symphony Orchestra, and the Friends of Killarney as well as the many volunteers who made this possible!

Stars over Killarney 2023: Colour in the Cosmos

Next year’s Stars over Killarney is already in the planning stages.

The theme combines the outstanding Artist-in-Residence and Astronomer-in-Residence programs to bring together the enjoyment of the beauty, especially seen in the fall colours, of our world combined with that of the universe.

Reservations for Ontario Parks can be made up to five months in advance, meaning you can book your campsite for the 2023 Stars over Killarney as of May 13, 2023!