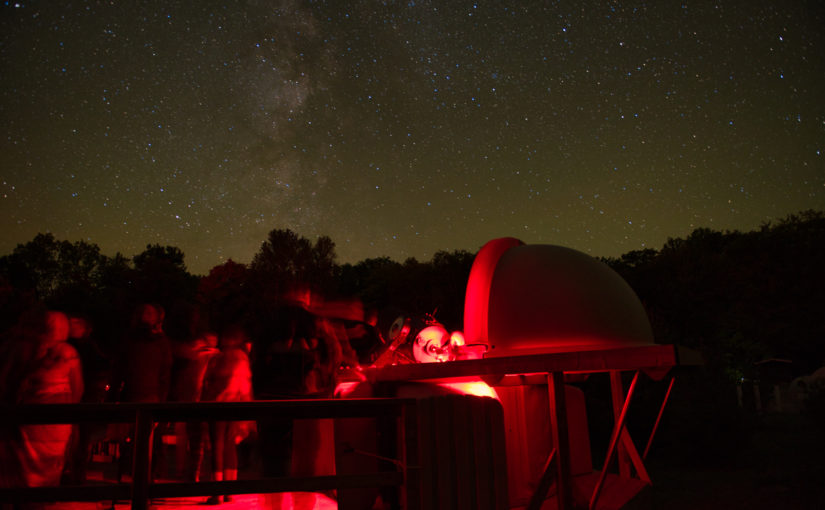 Today’s post comes from Bruce Waters, a former educator at the McLaughlin Planetarium and founder of the Killarney Provincial Park Observatory.

Astronomy is a field of science that embraces an inquiring mind, and knows that there are often many perspectives in which to learn, to study and to appreciate the cosmos and beyond.

In this International Year of Indigenous Language, Ontario Parks was fortunate to host a truly amazing event featuring Indigenous astronomy and cultural learning.

“[This] event was a great example of how collaborations that are built upon mutual respect can foster and support true Reconciliation,” said Luke Wassegijig, Wikwemikong Tourism Manager. As with the officially recognized “Greek” constellations, there are different animals and heroes to appreciate within the Indigenous understanding.

In the words of the Ojibwe Elder Carl Gawboy, from whose research comes much of our knowledge of the Anishinaabek constellations, “[How could anyone] hike, canoe, ice fish, hunt or even pick berries under a sky made up of crabs, lions, rams, goats and scorpions?”[1] (referring to the official constellations).

The event was hosted at Killarney Provincial Park with presentations made by Elders and guides from the Wiikwemkoong Unceded Territory, Wikwemikong Tourism, and Point Grondine Park (kudos to Naomi Mishibinijima from Wikwimikong Tourism, who greatly assisted in the organization of the many elders and guides)! Will Morin, professor of Indigenous studies at the University of Sudbury, was a key organizer and presenter. We were also privileged to have the Waasa Naabin Youth Centre join us as highly enthusiastic guests.

Acknowledging the land and welcoming the guests

The day started with a welcome by Luke Wassegijig.

Next followed an introduction to the core Anishinaabek principles from Elder and Knowledge Keeper Brian Peltier, supported by Professor Will Morin. A traditional welcome song was beautifully sung by our guide – Steven Antoine. All those in attendance were deeply moved at his amazing voice and pride behind the music.

A fresh perspective on a favourite hike

After lunch, there was a guided hike of the beautiful Granite Ridge trail led by Point Grondine guides, Steven Antoine and Tyrone Debassige, and Ontario Parks’ Discovery Leader Michelle Lawrence. They explained the importance of the land and the fauna to the Indigenous way of life.

Those who signed up with the Science North portion of the Stars over Killarney event were treated to a tour of Polaris Boulevard (featuring the huge sundial), learned how to use a planisphere, and watched Science North’s award-winning show Minwaadiziwin in their Planetarium.

In recognition of the land, Killarney’s observatories are given Anishinaabemowin names

In the late afternoon, Killarney Provincial Park was honoured to have the Elders unveil the formal names for our two observatories.

It was decided that — to honour the land upon which the two observatories were built — the observatories would receive Anishinaabemowin names, something we believe to be a North American first!

Here are the new names (spoken by Madeline Wemigwans):

After dinner, over 200 participants listened, enthralled, to the Anishinaabek creation story as told by Brian Peltier. His amazing explanation helped to provide a very detailed and rich context for what was soon to come. Professor Will Morin provided a rousing discussion of Anishinaabek astronomy based on the books Ojibwe Sky Star Map [2]and Talking Sky. Like Brian, he connected the creation elements to those of the Anishinaabek constellations. The audience was treated to a rich understanding between the language and the story elements portrayed in the constellations. Visitors then traveled through our 1:2 billion scale model solar system on a self-guided hike to Saturn (700 m away). Then they reached the observing field, where the park’s two observatories and 15 other telescopes were set up on various objects. These 15 telescopes were set up by volunteers from the Sudbury Centre of the Royal Astronomical Society of Canada, as well as the Kitchener Waterloo Centre. Led by Linda Pulliah, the volunteers spent many hours with the event visitors showing them the amazing sights.

Will Morin projected the Indigenous constellations onto a temporary screen while, at the same time, they were pointed out in the night sky to the 250 attendees who had now gathered by the observatories.

A call out to Rachel Mantas and the Friends of Killarney Park, who provided refreshments and educational material on Indigenous astronomy well into the late hours of the night.

The event wrapped up shortly after 11:00 pm with everyone overjoyed at an incredible experience that had been rich in both culture as well as the development of a greater understanding of the beauty of the sky at night. All done within a spirit of collaboration, respect and reconciliation! A special thank you to Superintendent Jeremy Pawson and Assistant Superintendent Shawn Spencer, as well as Discovery Leader Michelle Lawrence, who worked tirelessly to make this event a huge success.