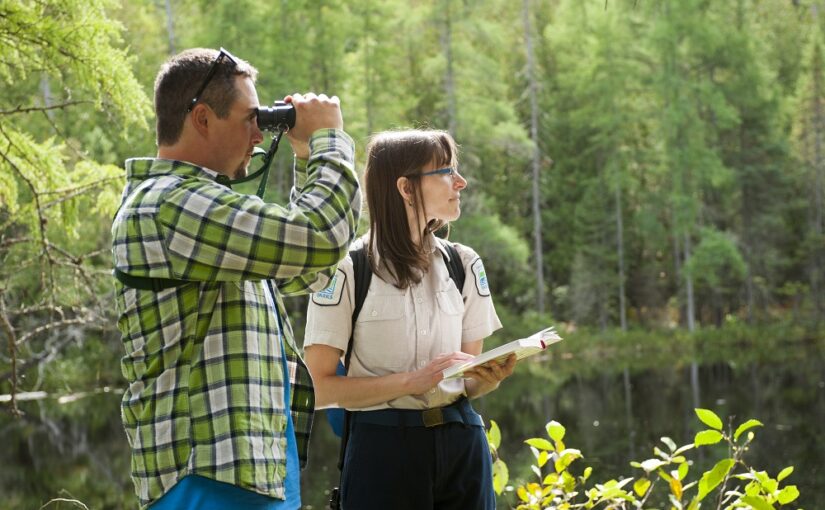 I am admittedly not a morning person by nature — if I had it my way, I would sleep in every single day!

But I am passionate about birds, and for just a couple of months each year I’m willing to roll out of bed at 5:00 a.m. in support of the Ontario Breeding Bird Atlas.

This past June, I joined a small crew of volunteers who were up at dawn for several days at both Grundy Lake Provincial Park and Mikisew Provincial Park to count birds for the Ontario Breeding Bird Atlas.

So what is the Atlas?

The Atlas is a five-year survey of the roughly 300 breeding bird species across Ontario, from Pelee Island in the south to Polar Bear Provincial Park in the north, and all places in between.

Most Atlas work takes place between the last week of May and the second week of July (peak breeding season), although a number of species nest before and after these dates. The Atlas is a way of scientifically gauging the status of nesting birds across the province over time — in other words, how the birds are doing and what is changing.

The data collected reveal that some species (such as the Bald Eagle) have experienced incredible recoveries over the last 40 years while other species  (including the Common Nighthawk) are experiencing serious decline.

Grundy Lake and Mikisew provincial parks supported the Atlas in June by providing campsites to “Atlassers” doing a “square bash.”

For this project, the province is divided into 10×10 km survey squares. Using the parks as a “home base,” Atlassers surveyed six squares surrounding each of these parks. Why were we up so early?

The “dawn chorus” (when most songbirds are singing their little hearts out) occurs around sunrise, and it’s the best bang-for-your-buck time for detecting them.

Our group included very experienced birders, but also involved Atlassers on all areas of the learning curve. Anyone who was not confident doing five-minute point counts by ear used a Zoom H2N hand-held recording unit to record the birds singing.

The five-minute recordings were uploaded to be interpreted later in the year by expert birders. The Zoom recording units make it possible for any avid birder to contribute top-notch data to the atlas.

The observer becomes the observed

My highlight of the Grundy Lake square bash? Stopping by a small wetland in the middle of the forest to do a quick bird list.

We didn’t have a full view of the wetland, but we could hear a pair of Sandhill Cranes calling back and forth to each other.

We were curious to see them, so we waited a moment and soon realized that one of them seemed to be getting closer and closer to us….all the while calling to its mate (we couldn’t see either one).

Down in the pond, I suddenly noticed a Sandhill Crane chick (called a colt because of its long, strong legs) swimming with gangly legs across the pond and disappearing into the bushes.

We put two and two together and realized that the adult Sandhill Crane was coming through the bushes to investigate us!

Not wanting to stress the little family out any further (and not wanting to come face to face with an unhappy Sandhill Crane), we retreated quickly to our vehicle and moved on to the next site.

“My highlight was seeing the Ruffed Grouse chicks crossing the road with their mom. When a Broad-winged Hawk came along and tried to scoop one, the hen started flying up at the hawk to defend her young!”

“My highlight was being scolded by a Sora. As I turned my back and walked away, he became emboldened! It was also neat to see a Junco nest for the first time!”

“While the birds were fantastic, the highlight of the square bash for me was the people. It was a privilege to get together with some top-notch birders. The enthusiasm was palpable. Spending a couple of days birding with Stan also upped my flora identification skills. Grundy Lake Provincial Park is certainly a beautiful place. I’m glad that I brought my canoe and my mountain bike to explore it a little bit more than I would have otherwise. I am looking forward to participating in more square bashes.

“As far as the birds, one highlight was an Olive-sided Flycatcher that called incessantly for an hour while we had our lunch break. I hadn’t seen one in a very long time. Then while we were driving along, I yelled, ‘Stop the car!’ because I heard a Canada Warbler. We managed to get some very good views of it and a couple of photos too.

“It was a very hard bird to capture images of because it moved around so much. One of the best bird highlights was an Ovenbird carrying food. After everyone had left to go birding first thing in the morning, I walked back to my tent to get something. The Ovenbird walked in a semi-circle around me within one metre of my feet, allowing me to capture it in a 30-second video.”

Get involved with our next bash!

The two square bashes I participated in were a great success, adding 330 point counts and over 125 hours of general atlassing in 12 squares.

Ontario Parks’ support makes the work in more remote areas a lot easier and much more productive. We look forward to organizing more square bashes at different locations in the north next summer. If you are an avid and/or experienced birder who would like to join a square bash next year (and who doesn’t mind ridiculously early mornings and dealing with mosquitoes), please contact the Atlas for more information.

You can support the Atlas anywhere in Ontario, with the greatest need for support being in the north. For more information, contact the regional coordinator in your area.

There are many squares that could use your help!

Remember: you don’t need to be an expert birder to make important contributions to the Atlas.

In fact, you may know where some of the most elusive nests are around where you live that perhaps no one else has noticed yet!

Planning a visit to a protected area this month? There’s still time to contribute to the Atlas!

Submit your observations to the Breeding Bird Atlas until the end of July.