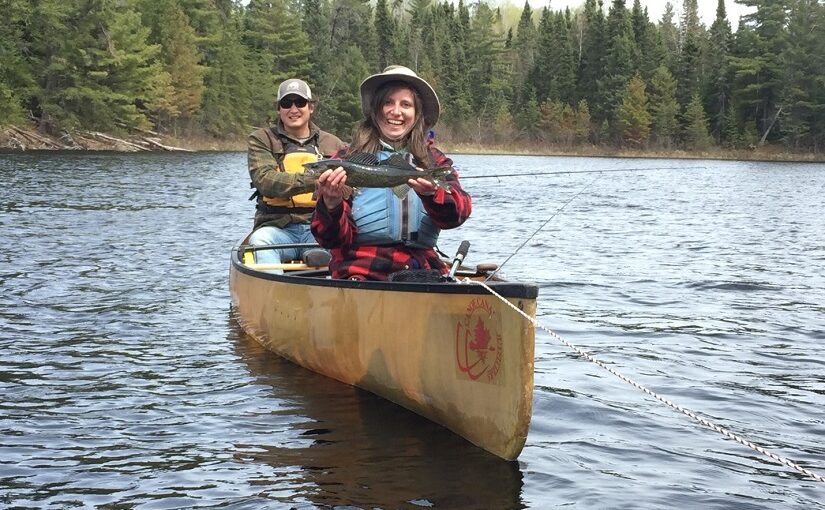 Some resilient fish thrive in icy cold-water year-round, like the Lake Trout. The majority of Quetico’s fish, including Walleye, Northern Pike, and Smallmouth Bass, prefer water the same temperature as you or me: a nice, even 20 degrees Celsius (or 68 Fahrenheit).

But what do most sensible fish do when the ice has come off, and the temperature in most of the lake is a fin-shriveling 4 to 17 Celsius?

Where, oh where, did our fish go? These fish go find warmer water; the warmer the better.

In the early season (I’m talking mid-May to end of June), the warmest water in a lake attracts a disproportionate number of fish, because these are the first places that have food available.

So, if you’re after a sure-thing fish dinner in the early part of the paddling season, what should you be looking for?

Mud. Brown mud and shallow water is what you’re after.

Brown mud absorbs the sun’s energy and dissipates it into the shallow waters around it, creating an environment conducive to the growth of plants, insects, and baby fish.

By May and June Walleye and Northern Pike have already finished spawning and are in desperate need of food. They are willing to tolerate water that offers them little-to-no cover in search of the insects and smaller fish that call these shallower, warmer areas of the lake home.

Smallmouth Bass haven’t spawned yet, but are also ravenous after a long winter. They can often be found in the same areas either preparing to spawn or in a pre-spawn foraging frenzy.

Regardless of whether you are on a deep, clearwater lake or a shallow, darker lake, you need to look at your map and find the pockets of water that will be the first to warm up.

Look for smaller bays offset from the main lake. These places will be mosquito-infested swamp-holes by July, but in the early season they are fish magnets. I can’t tell you how many big Walleye I’ve caught out of two feet of water on a calm, sunny day in June in muddy back-bays that won’t hold a single fish within a month.

Cast soft plastic swim baits and retrieve them fast enough to keep them off bottom and out of old weed growth, or try trolling shallow-diving crank baits at a casting distance from shore around the bay. These techniques will be effective for Walleye, but they will also pick up good numbers of bass and pike, depending on the lake, water temperature, etc.

Fish along old, dead weed lines and watch for boulders or rockpiles near shore.  These will provide cover for the Walleye and are breeding grounds for invertebrates.

Preferably, fish the south-facing shore of the bay, as even within these small bays water temperatures can fluctuate several degrees due to prolonged exposure to sunshine. For sluggish spring Walleye that can make all the difference.

It can also determine where the insects and other invertebrates will hatch first.  Find the fish food and you’ll find the fish.

Time for a fish fry!

If you’re planning on a fish dinner in Quetico in May or June, then you’ll want to get ready for a mud fight with a hungry Walleye. A few reminders for responsible fishing in Quetico:

Good luck and have a great trip!