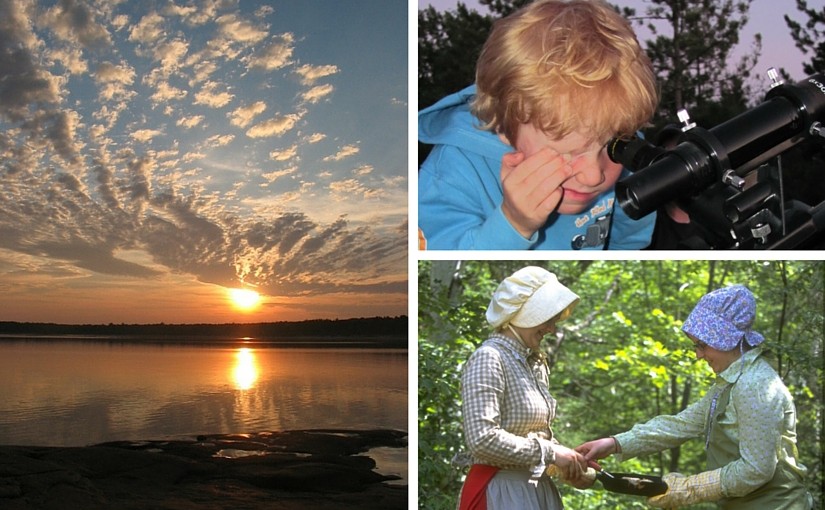 August nightlife at Ontario Parks promises to be exciting!

Take in the Perseid Meteor Shower, which produces 50-100 meteors an hour at its peak. Meet “spirited” characters from Ontario’s past on a ghost walk. Solve a park mystery and maybe even hear wolves howl.

We’ve collected a few favourite evening events; which one speaks to you?

Parks around the province are hosting astronomy events this summer. Quetico Provincial Park’s Astronomy Weekend is at the height of the Perseid Shower, August 11-14, 2016. Members of the Royal Astronomical Society of Canada (and their telescopes!) will be on hand to give visitors a tour of the night sky

Chat up a ghost or visit the Teaching Rocks

August evenings will be culturally rich too. Rumour has it that Bronte Creek Provincial Park‘s 19th-century Spruce Lane farmhouse is haunted. Join a Bronte Creek ghost walk to find out. Once a year, when the stars reach a particular alignment, those who once lived and worked along the Bonnechere River can be seen travelling the shores once again at Bonnechere Provincial Park‘s annual Spirits Night.

Howl at the moon

Algonquin Provincial Park is famous for its wolf howls. Held on Thursday evenings in August (conditions permitting), the wolf howls have been going for over 50 years!

A final decision to host a howl is always made on the morning of, based on weather and scouting by park naturalists. Please check to see if the event is a go before travelling.

Where will you soak in the OP nightlife this summer?