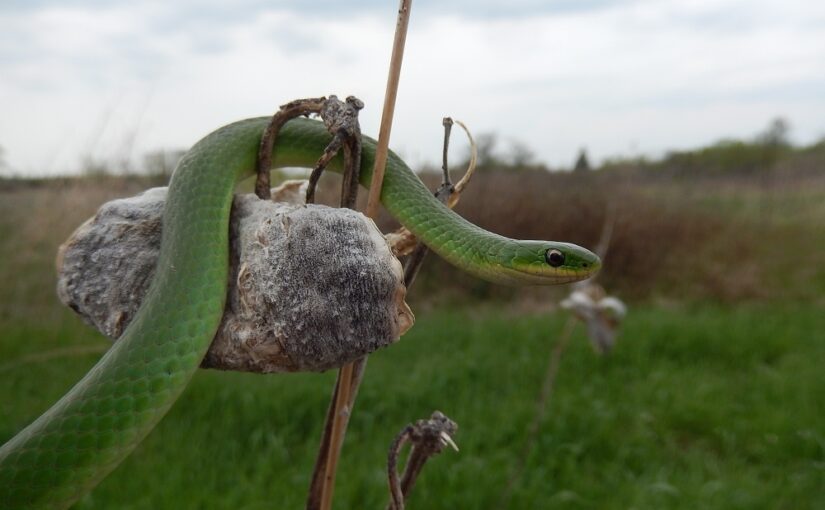 Are you terrified of snakes?

Do you believe they’re all large and frightening?

Well, everyone has a right to their own fears, but what if snakes aren’t all what the movies make them out to be?

It’s a common misconception that snakes are big and scary creatures. In reality, there are many species that are actually quite small and rather harmless.

Let’s discuss a few of Ontario’s smallest snake species, so we can hopefully change some opinions on snakes: The Smooth Green Snake is an inconspicuous species of snake. Their bright emerald green colour and relatively small size help this species blend into background vegetation quite well and remain hidden.

The Smooth Green Snake can be found in a number of habitats, ranging from prairies to wetlands to woodlands. Most commonly found in densely vegetated areas, this snake makes the most of its bright green colour and avoids predation.

The Smooth Green Snake is a slender-bodied snake that can grow up to a mere 66 centimeters in length. They mostly fall into the 30-50 centimeter range. Due to their size, they are ill-equipped to prey on larger animals such as rodents and frogs. This species is an insectivore, feeding primarily on crickets, spiders, caterpillars, and a number of other invertebrates.

The Smooth Green Snake, among many others, lacks the fangs that inspire fear in many. Instead, they have small sandpaper-like teeth that are effective at gripping prey to ensure they cannot escape.

Female Smooth Green Snakes lay between 2 and 11 eggs in late summer in rotting logs, or other covered areas like rocks or burrows underground.

The hatchling snakes are between 9 and 16 centimeters in length (about twice the length of the long edge of a credit card), and reach maturity in two years. The Northern Ring-necked Snake is another of Ontario’s smallest species of snake. They are a slender-bodied snake that is often less than 50 centimeters (about half the length of a baseball bat) in length.

The ring-necked snake is easily distinguished from Ontario’s other snakes, and aptly named because of the ring around its neck, usually a yellowish/cream colour.

The dorsal scales of this species range from dark grey to brown to black, and differ between individuals. The belly of the ring-necked snake is perhaps the most interesting part of the snake, being that it is bright orange or yellow in colour. The preferred habitat of ring-necked snakes is edge habitats or clearings of forested areas. They are often found in areas with surface bedrock and shallow soil depths. They tend to hide under bark, logs, or rocks to avoid predators and/or the heat on a particularly hot day.

Female ring-necked snakes will deposit their eggs (up to 10) in vegetation piles, rotting logs, stumps, or even under rocks, and they take about two months to hatch.

When the eggs hatch, the young snakes have an average length of only 12 centimeters!

The young snakes will reach the age of maturity within two to three years. Much like the previously mentioned snakes, the Red-bellied Snake is also one of Ontario’s smaller species of snakes and rarely exceeds 40 centimeters in length.

The Red-bellied Snake can be found in a variety of colours including brown, red, grey, or black. They often have two dark stripes that run parallel down their back and two more along the sides of their body.

The most fascinating part of the Red-bellied Snake is in fact where the snake gets its name from: its bright red (sometimes orange or pink) belly. This unique feature stands out extremely well, and actually appears much brighter than it seems in photographs when seen with the naked eye! The Red-bellied Snake occupies a range of habitats from forest clearings to meadows and fields. This species seeks out these habitats, preferring areas with an abundance of logs, rocks, and other ground cover objects where it can remain out of sight.

If you are someone that likes to garden or grow their own vegetables, the Red-bellied Snake might actually be a species you want to have around. They feed primarily on invertebrates such as insects, slugs, earthworms, and more, all of which can interfere with the quality of your vegetable garden.

Having the Red-bellied Snake around will keep these populations in check and also contribute to a healthy ecosystem!

The Red-bellied Snake breeds in the spring and is an ovoviviparous species of snake, meaning that the eggs are developed inside the mother until late summer, where 4-14 live young snakes are born.

Hatchling Red-bellied Snakes are quite small and usually measure between 7 and 10 centimeters in length.

Not so scary after all!

But as you can now see, not all snakes are big and threatening creatures.

Due to this common fear and hatred of snakes, some may be careless in regards to a snake’s life. The reality is that we need snakes, and they are a key part of the ecosystem.

And snakes need us too! Here in Ontario there are 17 species and subspecies of snakes, eight of which are listed as a species at risk (SAR). To ensure the longevity of our Ontario snake species, there are a few things that you can do to help:

Did you gain a new appreciation for snakes?

Please do not handle birds, mammals, or reptiles unless you are helping to safely move them off the road. The staff members featured here are trained biologists engaged in professional research. These biologists are following a strict animal care protocol approved by the Ministry of Northern Development, Mines, Natural Resources and Forestry. These protocols review the desired outcome of the research, and ensure measures are taken to put the least possible amount of stress on the animal. We ask that you always observe animals from a distance for both the safety of you and the animal.