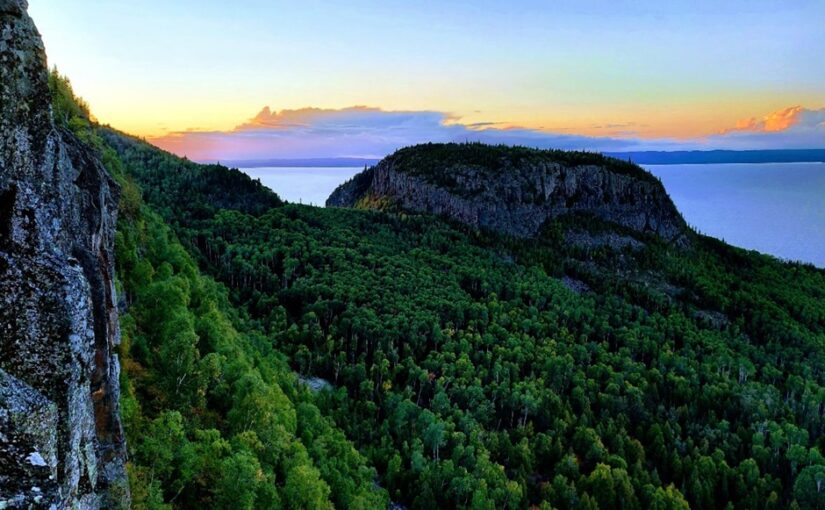 I first noticed the prominent buttress on the northeast face of the Sleeping Giant’s chest while hiking the Kabeyun Trail in the spring of 2003.

More specifically, as I enjoyed a break on the sunny, south-facing shoreline of Sawyer Bay, my attention was drawn to a natural lookout on top of an arête (the point where two cliff faces meet).

I immediately imagined the stunning landscapes that would be revealed to hikers who ventured to this natural lookout on the chest of the towering Giant and contemplated how I might make my way up there to take a look for myself.

Working as a park trail ranger

Five years later, I worked as the Interior Trail Ranger at Sleeping Giant and conducted field research for my geology thesis on the formation of the Sleeping Giant landform.

During that time, I hiked and cleared park trails throughout the work week and spent weekends exploring the park to check out noteworthy geologic features.

It was during such an outing that I finally made it to the promontory I had noticed in 2003.

I instantly fell in love with the remarkable scenery from the natural lookout on the northeast corner of the chest of the Giant for two reasons.

Firstly, the broad outcrop, flanked by cliffs on three sides, is devoid of mature trees. Later stages of succession have not fully played out at this site, which allows for unobstructed panoramic views.

Secondly, the northward-facing aspect from the Giant’s chest overlooks the entire Sibley Peninsula, which is unlike any other lookout within the park.

From this vantage point, hikers are rewarded with a clear line-of-sight to three successive bays on the craggy western shoreline of the Sibley Peninsula: Sawyer Bay, Hoorigan Bay, and Clavet Bay.

To top it off, the lookout offers breathtaking views of the Marie Louise Lake Campground, Silver Islet, Black Bay, Twinpine Lake, the Paps, and even the Porphyry Island Lighthouse.

As I first took in the sweeping views, I wondered if this exceptional viewpoint could one day become a designated park lookout for others to enjoy. Spoiler alert: it did!

Read on to find out exactly how this new lookout came to be, and the team that was involved in making this vision a reality.

A bit of context

The Top of the Giant Trail officially opened in 2002 and climbs the “knees” of the Giant.

The Head Trail is the most challenging trail in the park, which steeply ascends to the top of the “head” of the Giant.

Lastly, the Nanabosho Lookout Trail scales the “chest” of the Giant and recently underwent changes.

Fast-forward to 2014. While compiling a backcountry trail assessment for the park, I recommended relocating part of the Nanabosho Lookout Trail, including the lookout itself to reduce safety hazards, and to increase hiker satisfaction. Little did I know then that I would be the one to follow-up on this recommendation as the Park Superintendent.

In early 2019, Sleeping Giant Provincial Park initiated an environmental assessment to explore the pros and cons of closing the original viewpoint and creating a trail to provide access to the natural clearing on the northeast corner of the chest of the Giant.

A new half-kilometre route was flagged to access the proposed new lookout and ecological assessments were then completed by park staff and consultants. It was concluded that the new route would not adversely impact provincially-significant plant communities on the chest of the Giant and the project was endorsed by Ontario Parks’ Northwest Zone Ecologist accordingly.

The proposed trail would also lessen the risk of long-term habitat fragmentation and it would not bisect the entire mesa that makes up the chest of the Giant, as the former route did.

With these conclusions in mind, the establishment of the new Nanabosho Lookout Trail was given the green light to procced.

As an avid hiker and former Interior Trail Ranger, I was keen to see this project come to fruition before winter set in. I worked on the new trail construction during my time-off throughout November 2019. With the help of other park staff and volunteers the project was successfully completed, including the installation of new trail signs before major snowfalls arrived.

350 metres of the former Nanabosho Lookout Trail was also decommissioned to prevent hikers from accessing the old lookout and to ensure habitat rehabilitation.

We are happy to report that hikers can now explore the new Nanabosho Lookout Trail and enjoy the same incredible views I fell in love with almost twenty years ago.

A new trail and lookout to discover

Though the new Nanabosho Lookout Trail is open to the public, few people have yet to discover this rewarding new route.

With fall colours peaking in the coming weeks, now is the perfect time to visit Sleeping Giant Provincial Park and be among the first visitors to enjoy the breath-taking views from the new Nanabosho Lookout.

For more information on Sleeping Giant Provincial Park and its trails visit the Ontario Parks website.