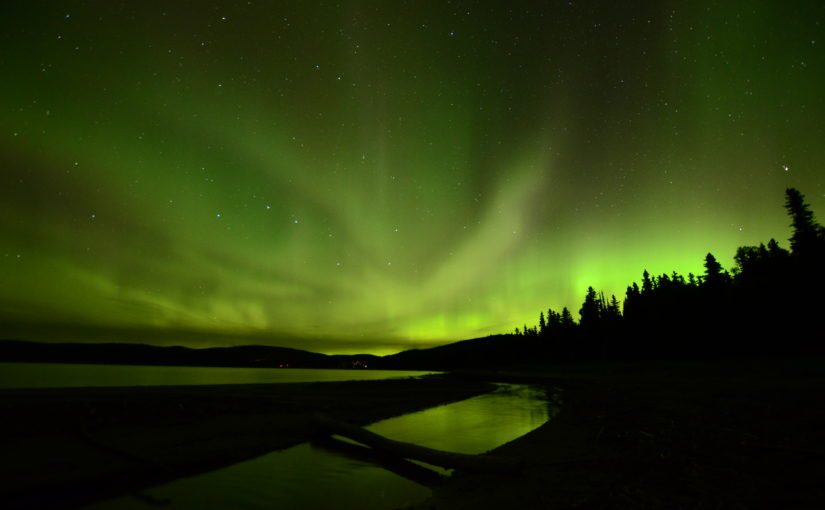 Stars as seen in midnight’s gaze
Stars shining upon shoreline’s haze
Guiding us, teaching us with stories manifold
About ourselves, stars speak, from birth till old.
Their permanence ties us to days gone by
But to hide their secrets, they still do try
To gaze upon them brings dreams of futures bright
But to see them vanish, is to lose much delight.

At Ontario Parks, we’re committed to the protection and preservation of our province’s biodiversity. The night skies in their natural splendour are an important part of that protection.

Our night skies are part of our heritage

Since ancient times, stars have been ever-present in the clear night skies. They have fascinated us and sparked our curiosity. One of the oldest human connections, felt universally around the world, was that of gathering around at the end of a day’s labours, and passing on the knowledge and wisdom of the elders. Their stories, relaying the culture of one generation to the next, were often of both practical and moralistic nature.

As the telling of these stories often occurred under the stars, it is not surprising that many of the stories were transposed onto the constellations. So the stars became ever-present storytellers, connecting us to our ancestors and histories.

From a scientific point of view, the ancients discovered the ability to navigate and predict important seasonal events from the stars. They used the stars to navigate — much like many insects and birds do — leading to intra- and intercontinental travel and trading routes. The cyclical nature of our seasons was revealed by observing which stars rose or set at certain time. This knowledge was then used to create calendars that could predict when important events would occur, such as the annual flooding of Nile, or the sowing and reaping of crops.

The ability to navigate and forecast calendars from the stars sparked the curiosity and fascination, and compelled our ancestors to learn more about those mysterious points of light.

Our night skies are crucial to protecting Ontario’s ecological health

Many birds, amphibians, insects and plants (and us!) have evolved to rely on uninterrupted periods of darkness during the night.

Seasonal changes in how long it is dark at night helps plants prepare for spring and fall, and provides important signals to other animals that trigger events like amphibian breeding and bird migration.

Unfortunately, the desire to illuminate the night and banish the dark has led to vast areas where artificial lighting has spilled out of cities and backyards, disrupting the darkness that is important to so many creatures and plants. Some animals emerge at night, so light pollution may delay their activity, reducing the amount of time they can actually be out looking for food, migrating or finding a mate. Likewise, some predators are dusk specialists; the longer “dusk” lasts, the longer they may be active, putting increased pressure on other wildlife populations.

Many birds and insects migrate at night, and some use the moon and stars to navigate. Artificial lights can distract or lead wildlife off-course. Migrating birds may collide with windows of illuminated buildings at night, thinking the light is a more distant star. Artificial lights also attract insects. They may fly at the light, tiring themselves, depleting fat reserves and getting too worn out to do what they were supposed to (migrate, find a mate, etc.).

Today, our ability to see the stars is under extreme threat as our civilizations’ needs for extreme lighting encroaches upon the natural darkness. During the 1970s, people living in the outskirts of Toronto could still see the Milky Way at night. Now, only during blackouts is this possible.

According to the American Medical Association, “[m]uch has been learned over the past decade about the potential adverse health effects of electric light exposure, particularly at night. The core concern is disruption of circadian rhythmicity.” In other words, the impact of nighttime light, especially towards the bluer end of the spectrum, can significantly affect our sleep patterns and our overall health.

It doesn’t have to be this way.

With proper shielding and selection of light fixtures, the light can be directed only on the ground where it should be, preserving the skies above and eliminating the spill over into our bedrooms. This not only saves our health and night skies but significantly saves money. The Royal Astronomical Society of Canada is an international leader in working to protect our health and the night skies. Working with other similar organizations such as the International Dark Sky Association, RASC has come up with various designations which denote a place that is focused on the protection and preservation of our night skies. Killarney has implemented programs and safeguards to ensure that ALL local lighting is shielded, reddened or turned off when not in use. Outreach programs through interpretive signage and instructional programs describe best practices and their benefits.

Killarney Provincial Park continues to work and cooperate with local groups, organizations and landowners to further this ongoing dark sky awareness and preservation. We are proud to help safeguard this natural resource.